Trade Justice believe everyone has the right to feed their families, make a decent living and protect their environment.But the rich and powerful are pursuing trade policies that put profits before the needs of people and the planet. 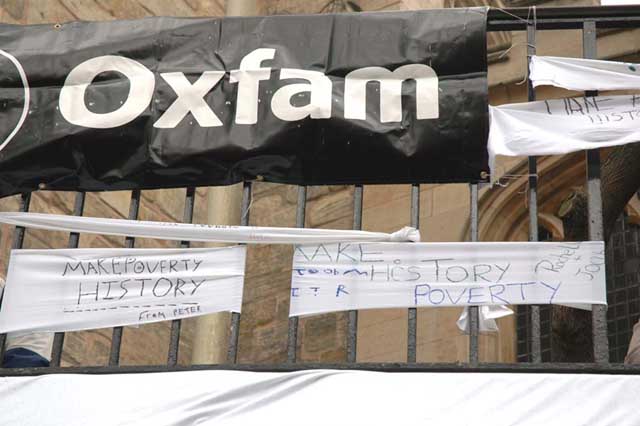 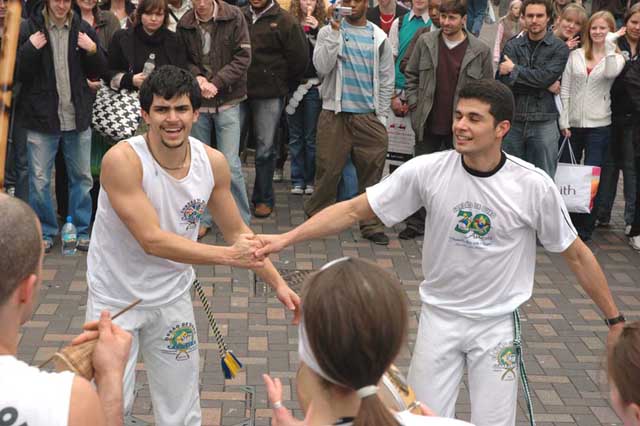 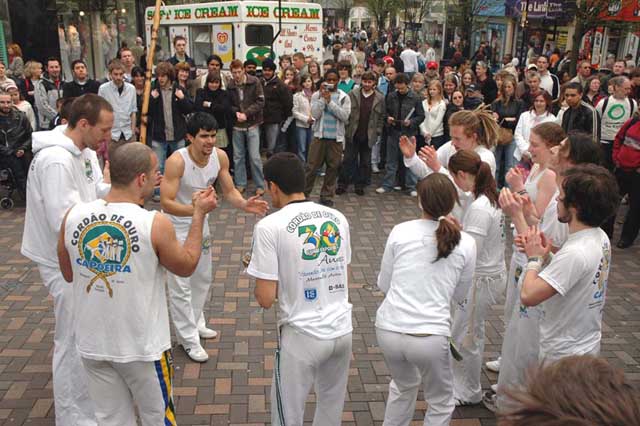 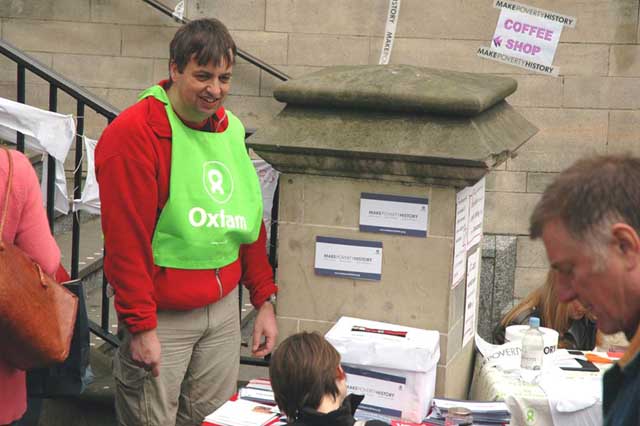 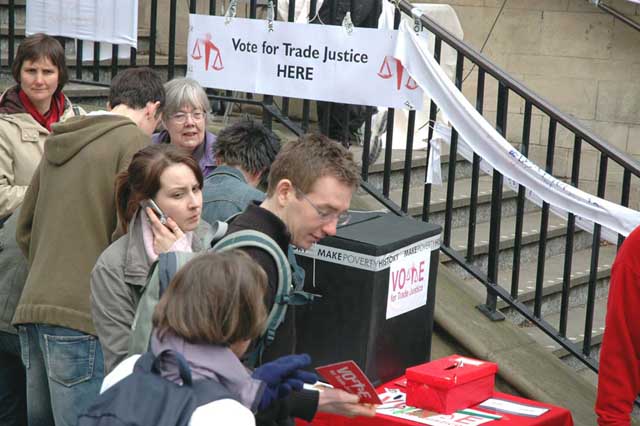 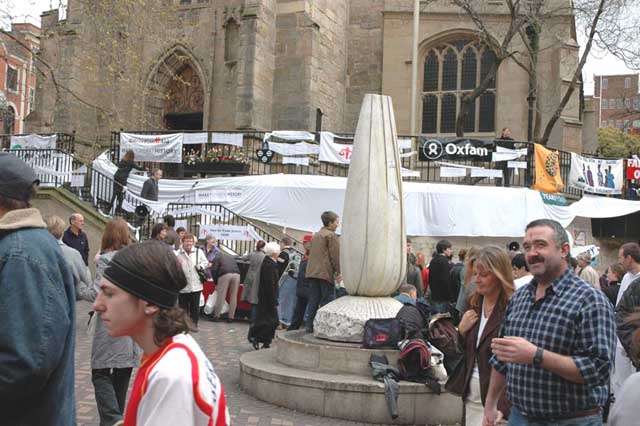 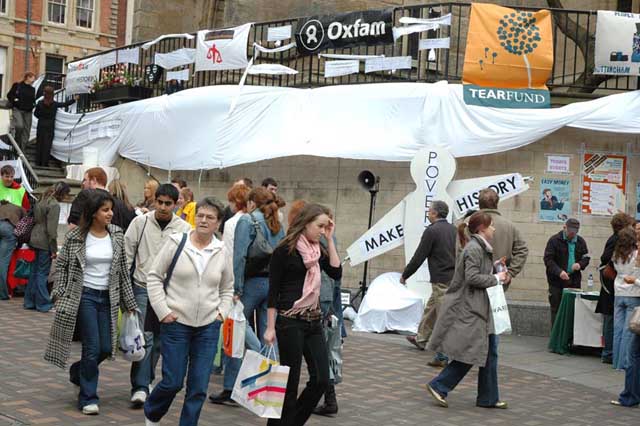 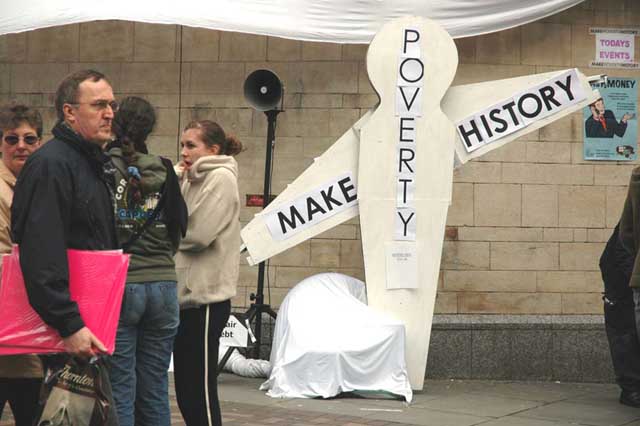 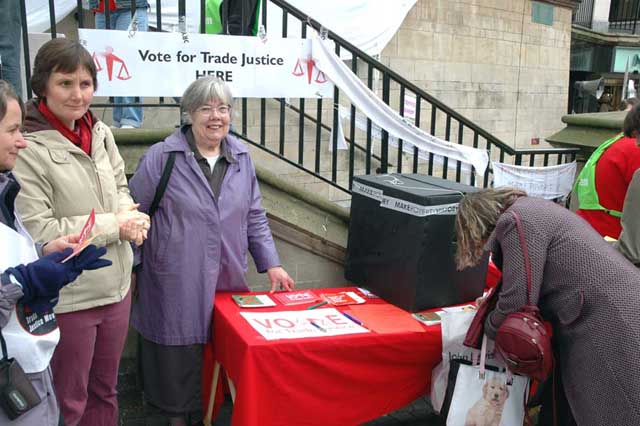 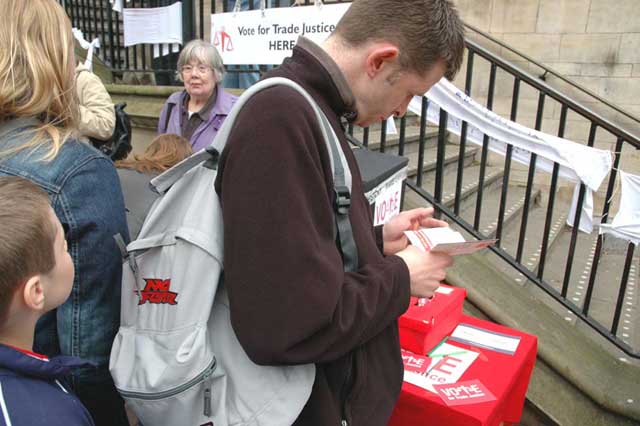 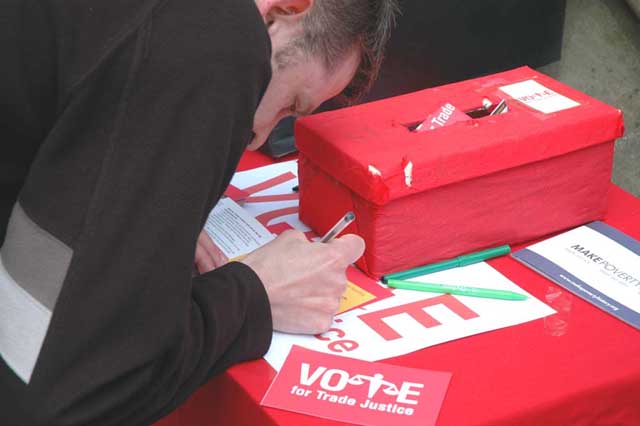 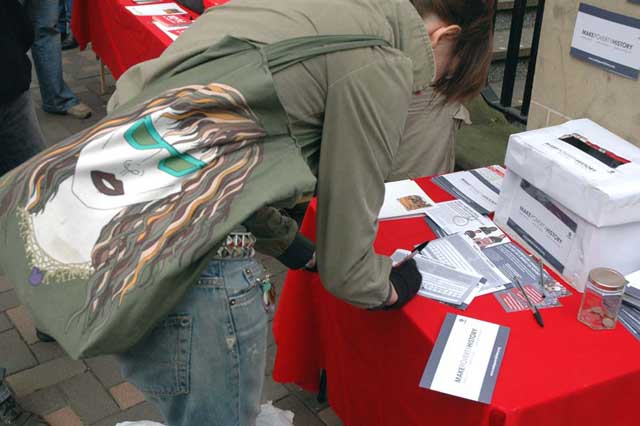 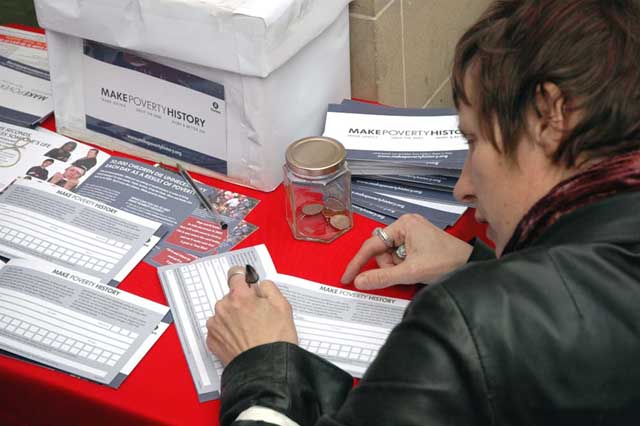 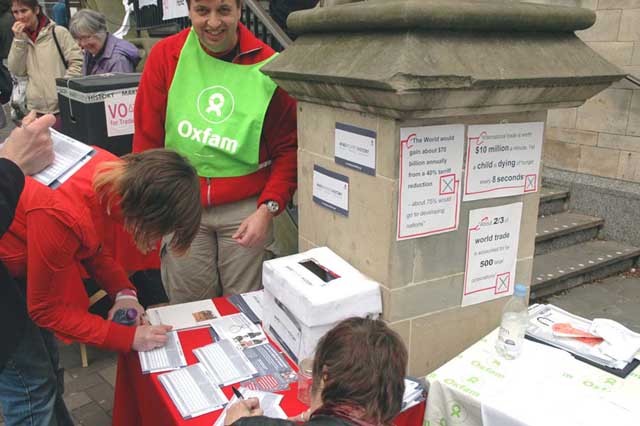 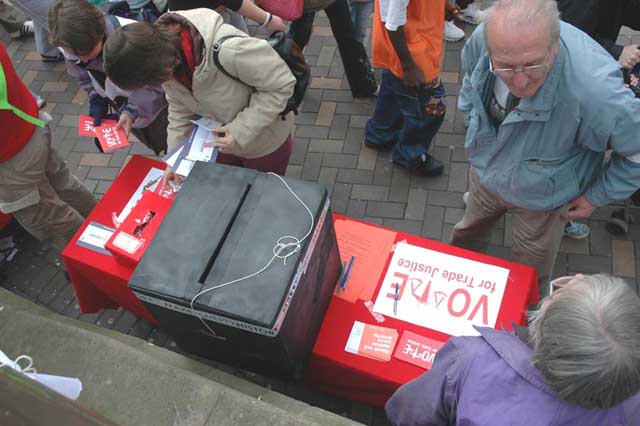 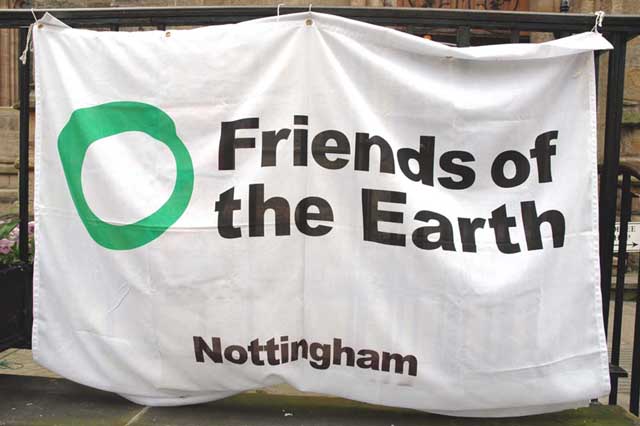 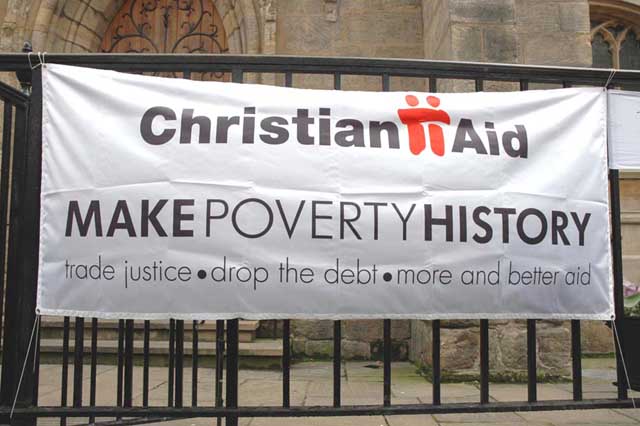 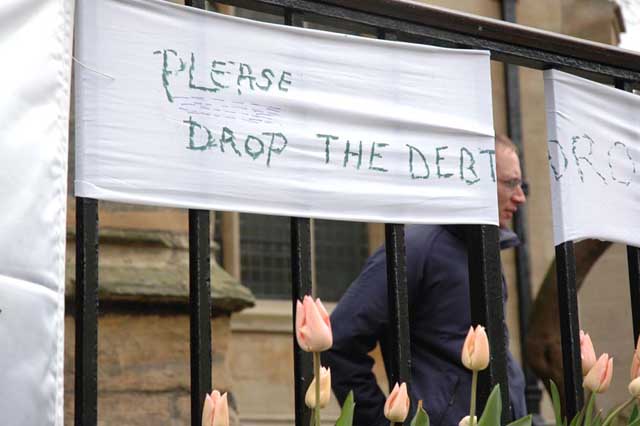 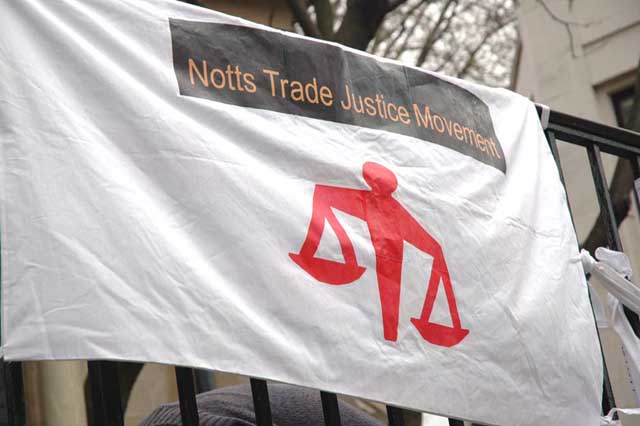 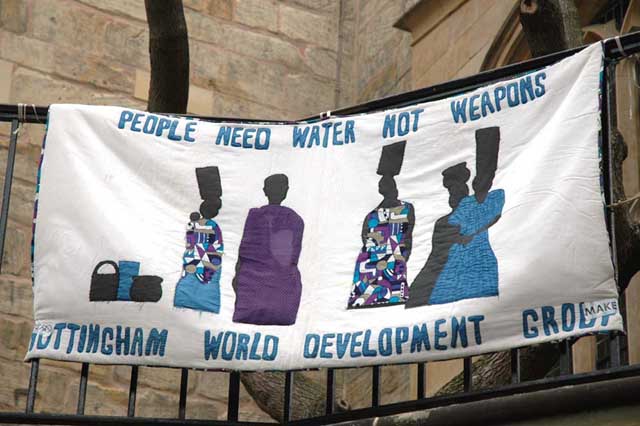 These pictures are from the Nottingham Event. St Peters Church, Nr Broadmarsh

Trade Justice believe everyone has the right to feed their families, make a decent living and protect their environment.

But the rich and powerful are pursuing trade policies that put profits before the needs of people and the planet.

To end poverty and protect the environment we need Trade Justice not free trade.

The UK Government should:

Fight to ensure that governments, particularly in poor countries, can choose the best solutions to end poverty and protect the environment.
End export subsidies that damage the livelihoods of poor communities around the world.
Make laws that stop big business profiting at the expense of people and the environment

Public concern on international trade will be demonstrated as thousands mobilise for a mass rally on trade justice this weekend.

People are traveling from across the country to be in Westminster and Whitehall on Friday evening for 'Wake Up to Trade Justice' - a night-long vigil and protest to ensure that all political parties know the strength of the public demand for trade justice not free trade.

The vigil, organised by the Trade Justice Movement as part of a Global Week of Action for Trade Justice, will start with a special celebrity-supported event at Westminster Abbey.

Participants, led by representatives of Trade Justice Movement organisations - which represent nine million UK voters - will then form a 'Human White Band' around Parliament Square, the symbol of Make Poverty History, highlighting the policy changes on trade the campaign is demanding the parties adopt.

The activists, public and celebrities will then proceed along Whitehall for a candle-lit vigil, including a mass 1-minute's silence at midnight to mark the millions of lives being destroyed worldwide by unfair trade laws. A night of film, music, debate and education at venues around Whitehall follows.

The event is set to culminate in a dawn procession before Trade Justice campaign delegations meet representatives from the three main political parties.

"The British electorate is rightly concerned about the economy, health and education - but not just in the UK. The free trade policies the rich countries are pushing on the developing world are robbing people of health and education services and promoting economic insecurity for communities on a global scale."

"This is a wake-up call for political leaders of all the main parties - if elected, they must make sure urgent action is taken if we are to have justice in international trade and start to make poverty history in 2005. We are making world poverty a doorstep issue."

"All the parties claim to be concerned about apathy towards politics especially among the young. Yet thousands of potential voters are coming to Whitehall to demand the parties address their concern that Britain's trade policies do not hurt the world's poor and the planet. The parties would do well to listen."

The Trade Justice Movement has called on all UK political parties to make public statements setting out their position on stopping the push for poor countries to open up their economies at the World Trade Organisation (WTO) and through other forms of international pressure.

Around the world millions of people in more than 80 countries are taking to the streets in the Global Week of Action running from 10-16 April - calling for trade justice to help lift people out of poverty.


Notes for Editors:
1. Wake Up to Trade Justice on 15/16th April is a celebrity supported all-night carnival of music, art and protest. See www.tjm.org.uk.

2. The Trade Justice Movement is a coalition of 67 organisations including aid agencies, environment and human rights campaigns, fairtrade organisations, trade unions, and faith and consumer groups.

3. Trade Justice is one of the key calls of MAKEPOVERTYHISTORY, the UK's largest ever anti-poverty mobilisation already supported by 400 UK organisations.

4. The Global Week of Action is the biggest mobilisation yet on trade, with events in every continent, including all of the G8 countries. Thousands of events, in both rich and poor countries, include demonstrations, petitions to governments and institutions such as the IMF and World Bank, voting for trade justice, street theatre and marches. Over a hundred events have already taken place across the UK. For more information see www.april2005.org/media.

6. The Trade Justice Movement is calling on the UK Government (whichever party takes power) to ensure that developing countries can choose the best solutions to end poverty and protect the environment. The coalition has written to the leaders of the major parties demanding they adopt policies to stop forcing trade liberalisation on developing countries in areas including industrial tariffs, trade in services and agriculture.

The letter can be read at: www.tjm.org.uk/wakeup/letter.shtml.