The Deputy Prime Minsiter is putting Britain's climate change targets at risk by failing to make UK homes more energy efficient. According to the UN, climate change kills 150,000 people every year, and Tony Blair has described the threat as the gravest we face. 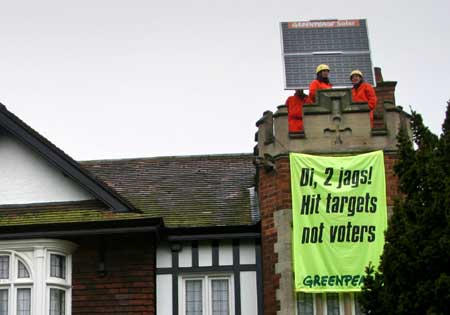 Mr Prescott - who says everybody must 'do their bit' to fight climate change - is in charge of housing policy in the UK. Our homes account for over a quarter of the UK's climate damaging emissions. The government is aiming for a 20% improvement in household energy efficiency, but unless Ministers take drastic action they will fail to meet the target.

"The Deputy PM's got a reputation for straight-talking," she said from the roof, "but since the election kicked off we've heard barely a squeak about climate change from big hitters like him. As long as the average existing British house is responsible for six tonnes of CO2 every year he's not dealing with the climate crisis. He's in danger of hitting more voters than climate targets. Whoever wins on May 5th needs to get serious about energy efficiency."

Mr Prescott's office has stated that he wants to create 'sustainable communities' requiring 'a step change in the way our housing and communities are planned, designed and built.' But so far he has failed.

"Mr Prescott thinks climate change is a huge threat and lectures the world about the need to tackle it, but when it comes to meeting Britain's climate targets he hasn't got his house in order," said Laura. "The average British home is responsible for more greenhouse gas than the average car. John Prescott needs to make sure all new homes are 100% climate-friendly and help existing houses become much more energy efficient."

The protesters also left low energy light bulbs and loft insulation outside the front door of Mr Prescott's house in Hull before taking to his roof to install the clean energy system. The solar panels are ready for use as soon as the Deputy PM plugs them in.

Tell Prescott to get his house in order

Please send an online fax to Prescott asking him to set tough environmental standards for all new buildings and create incentives for massive energy saving in existing homes: