Okay, it was perhaps the longest banner drop in the history of banner drops (over 8 hours to unfurl) but it was worth it... 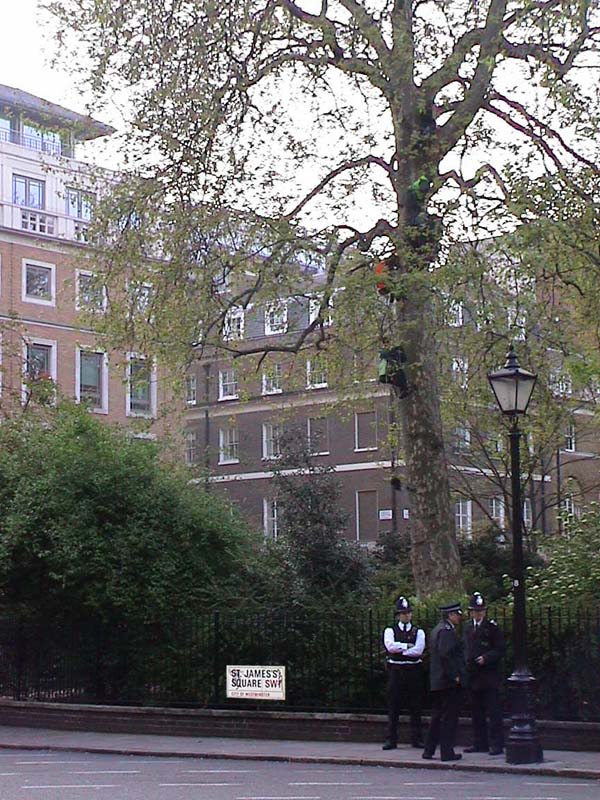 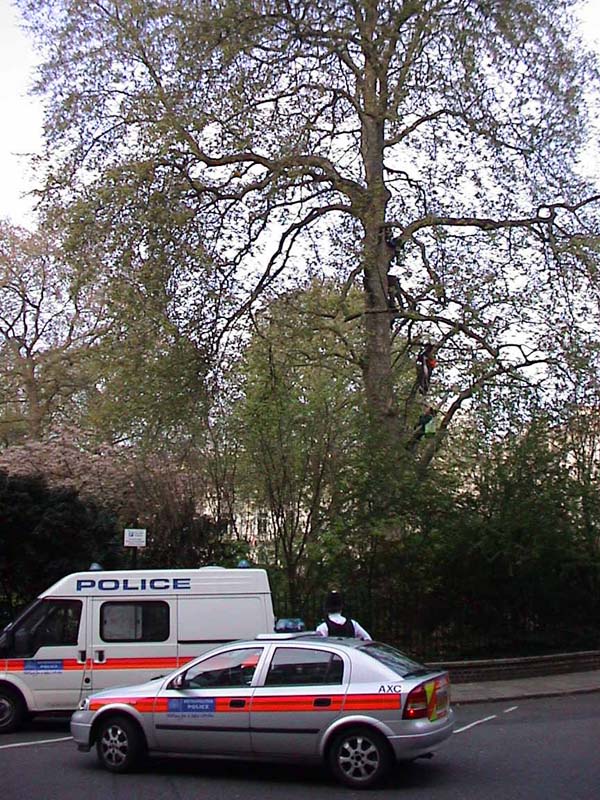 "there's no way I'm going up there after them!" 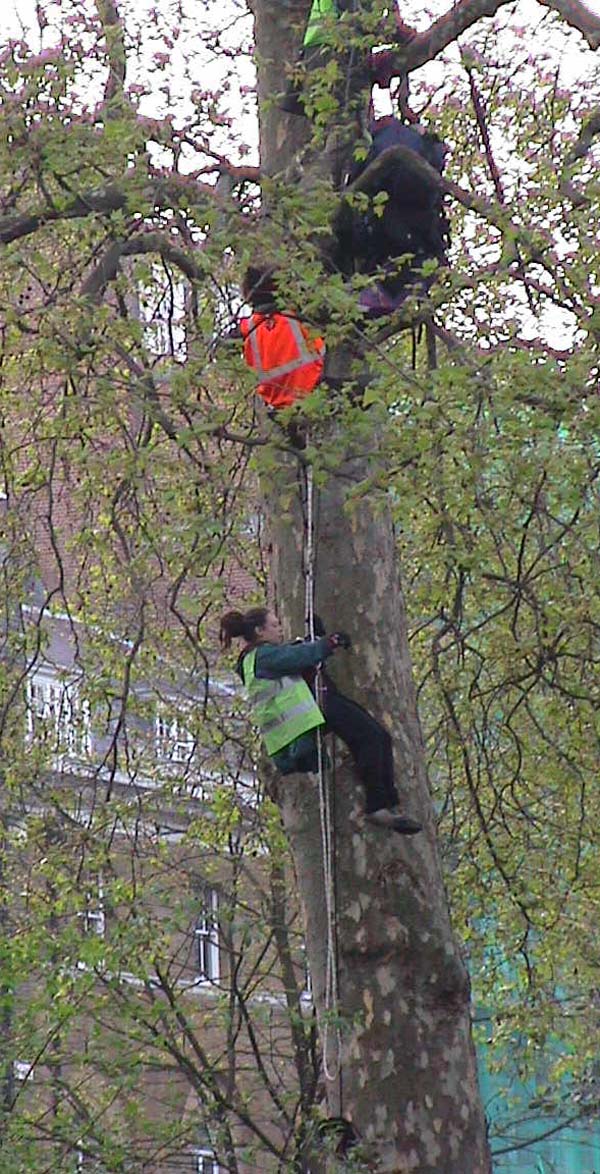 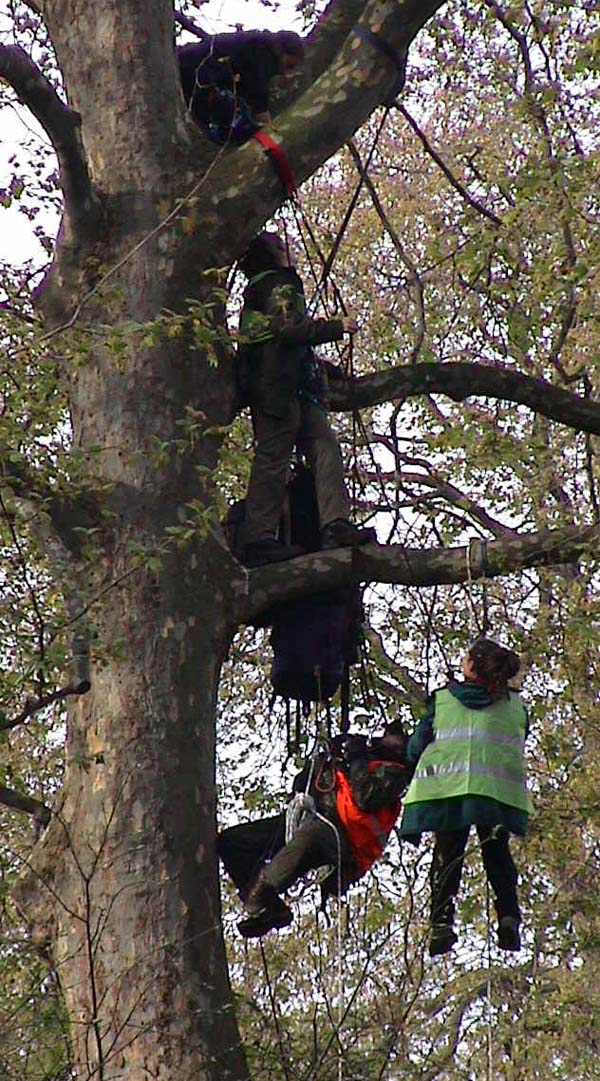 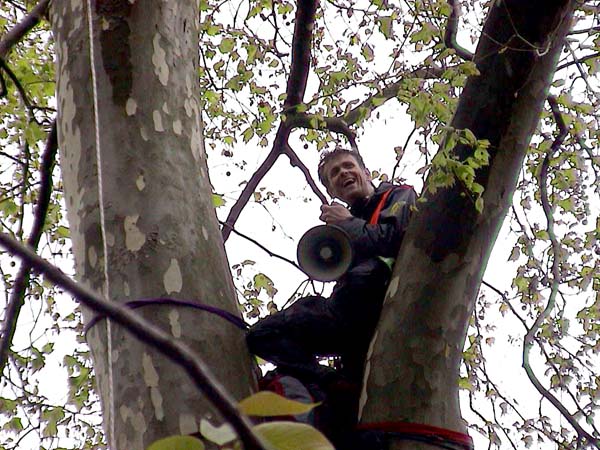 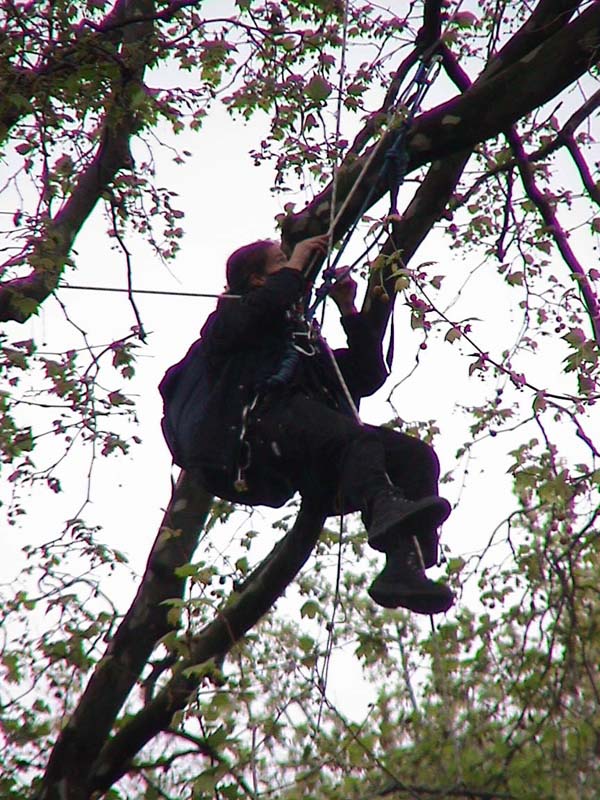 "which one do I pull to unfurl the banner?" 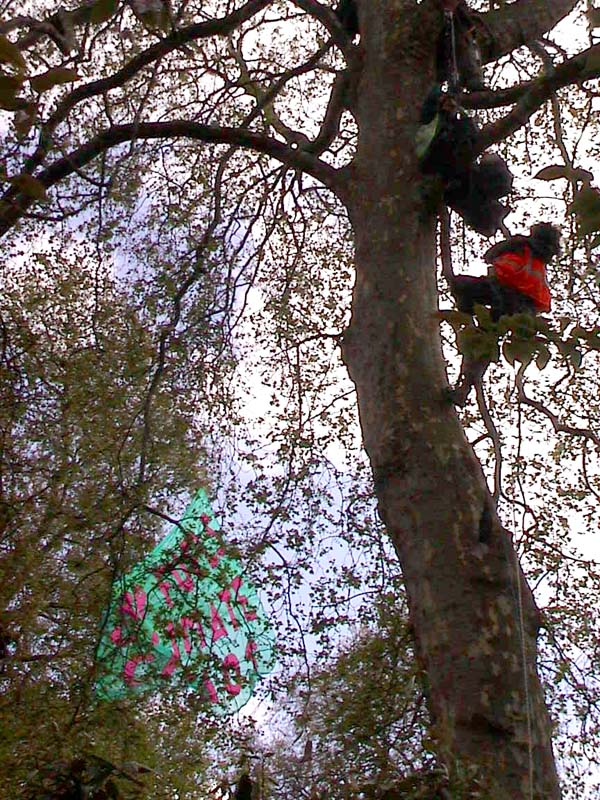 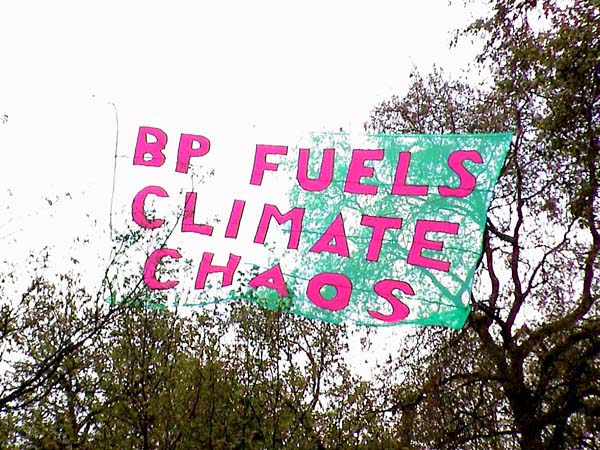 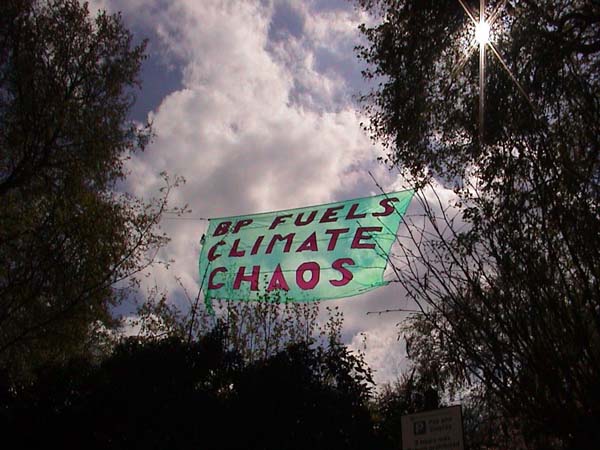 Nice banner - only 8 hours to hang it

While BP was announcing record earnings of £2.9 billon pounds, protesters were occupying two trees opposite their London HQ in St' James Park. The oil giant profits leapt 29 per cent higher than the same period last year and came as the UK’s biggest corporation continued to benefit from surging oil prices since the invasion of Iraq.

The haul, equivalent to earnings of £1.3 million an hour, comes two months after BP posted a record annual surplus of £8.7bn, a figure that stoked calls for a windfall tax on energy companies who have benefited from public spending on the 'war on terror' inflating oil prices.

Because of the increase in oil prices, profits from its exploration and production division stood at £3.4bn , a gain of 53 per cent.

The protesters occuping the trees outside BPs corporate HQ aimed to highlight the company's appalling environmental and social record.

Protesters have occupied trees outside the headquarters of oil giant BP today, in protest at the company’s environmental and social record. This comes on the day that the company announces its highest ever profits, in its financial results for the first quarter of 2005.

Sam Sutherland, one of the tree-bound protesters, commented,

“We’re taking this action to draw attention to what is missing from those results: spiralling climate chaos, systematic human rights abuses and untold ecological carnage. With profits of well over $2 million every HOUR, BP is not making a living – it’s making a killing”. [1]

The protesters – from London Rising Tide – cite as their reasons for action not just BP’s impact on climate change [2], but also the company’s reported connections with death squads in Colombia [3], its efforts to gain access to Iraqi oil reserves [4], and the ‘environmental timebomb’ of its Baku-Tbilisi-Ceyhan Caspian Sea pipeline [5].

Tony Blair – who is known to be close to BP – will be hoping that public sensitivity over oil company profiteering does not rub off on his election campaign. But protester Joe Olver commented,

“It’s not hard to see why they call it Blair Petroleum. While the Prime Minister’s rocky relationship with one Mr Brown may have improved publicly pre-election, with Lord Browne of BP, it’s always been all smiles.”

The protesters argue that the Prime Minister’s relationship with the oil company may prove difficult to square with his stated concern for climate change and the plight of Africa. Protester Olver added,

“If Blair were serious about climate change and Africa, he would pay more attention to the company he keeps. He is going to have to make a choice between helping BP executives or the millions displaced by drought in Africa.

The activists will spend the night there, to confront BP staff with their message for a second time on Wednesday morning."


"Notes for editors
1: BP has announced profits of $5.5 billion for the first 3 months of 2005. More info: see www.bp.com Investor Relations section
2: In spite of its environmental brand, BP invests about 1% of its capital on renewable energy (Ranging between $100 and 200 million, out of total investment of around $15 billion, the rest being spent on climate-altering oil and gas).
3: BP has been widely reported to have paid military units in Colombia to protect its facility, despite their involvement in human rights atrocities. More info: see www.colombiasolidarity.org.uk
4: Prior to the invasion of Iraq, BP asked Prime Minister Blair to ensure that there would be a “level playing field” for British companies wanting oil opportunities in post-war Iraq, as well as American companies (FT, 11/3/03). In December 2004, BP was awarded its first contract in the country, managing data on one of Iraq’s biggest oilfields.
5: Substantial evidence has been brought to light by senior engineers working on the pipeline of shoddy technical standards and incompetent construction management, leading to a high risk of spills. See Independent, 26/6/04. More info: see www.baku.org.uk"