We will be linking with the ANZSOC criminology conference happening from 7-9th of February 2006 in Tasmania. They haven't finalised the program yet, but do plan to have four plenary sessions around the theme of Human Rights: 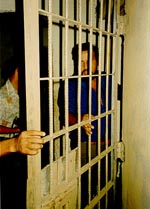 We are excited to announce that ICOPA X1, the eleventh International Conference on Penal Abolition will happen in Tasmania, Australia from February 9 - 11,2006. Please pass this onto all networks.

Justice Action has accepted the responsibility to coordinate this conference, and will be working with others around the world to ensure that it is an historic, inclusive and accessible event. We want prisoner and exprisoner involvement to be a feature. Let those most affected be heard and let us share their future!

Each ICOPA asks these questions:

What is wrong?
What are we doing?
What can we do?

The agenda and the form of the conference is now open. Please email us proposals and pass to others this notice. Some suggestions for strands are:

* The Politics of Imprisonment

Organising Inside: Prisoners' resistance and the Outside Community, Writing and Art as Resistance, Barriers to Reintegration, Surveillance, Organising in the Community - Exprisoners' Organisations, Convict Criminology.

Proposals for the future.

We will be linking with the ANZSOC criminology conference happening from 7-9th of February 2006 in Tasmania. They haven't finalised the program yet, but do plan to have four plenary sessions around the theme of Human Rights:

Tasmania is an ideal place to discuss punishment. It used to be called Van Dieman's Land, and was the place where most of the original convicts were sent from England from 1788 until the 1850's. It was the ultimate as a penal colony, was almost entirely a prison, and changed its name to avoid the historic shame. It had penal settlements where convicts were tortured - all well documented. And the convict responses are very special learning experiences, still valid today.

Some websites for ICOPA:

1985 - ICOPA 11 was held in Amsterdam and was organized by mainly academics and European scholars.

1987 - ICOPA III was organized by a prison abolitionist group in Montreal, Canada. This conference marked a huge change in the abolitionist movement. Participants and conference organizers decided that a goal to abolish the prison was not sufficient. The real problem was the penal mindset which allowed the prison to exist; thus, to abolish the prison without abolishing the penal mentality and penal structure would only open us up to more oppression. As a result of this realization, the International Conference on Prison Abolition transformed to become the International Conference on Penal Abolition.

1989 - ICOPA IV was held in Poland during a time of political upheaval (iron curtain had not fallen yet) and great oppression. This conference was small but very successful in its showing of bravery and true human commitment to this movement.

1991 - ICOPA V was held in Indiana, USA. This conference focused on Native/Aboriginal Justice and racism in the American Justice System.

1993 - ICOPA VI was held in Costa Rica. This is considered to be among the most successful conferences because it included many scholars, activists, ex-prisoners and government officials who were taking the movement and its ideas seriously.

1995 - ICOPA VII was held in Spain. This conference was not very focused on abolition and thus received many complaints and criticisms from its participants

1997 - ICOPA VIII was held in Auckland, New Zealand. This conference was a good opportunity to learn about Maori Justice and Alternative Justice models based on Maori traditions.

2000 - ICOPA IX was held in Toronto, Canada. Returning to the city it was born in, this conference focused on Transformative Justice and the Corporate Agenda's role in Criminal Justice.

2002 - ICOPA X in Lagos, Nigeria. It was the first one in Africa. The theme: Transformative Justice and Practical Alternative to the Penal System..

Labor's Plan to protect and strengthen human rights in Australia There is no authorisation from Labor to validate its authenticity. However no issues of concern identified in relation to content

We have been told that this policy is a direct result of the Middleton case, which successfully challenged the Commissioner's refusal to acknowledge his discretion to give maximum security prisoners access to computers in their cells. Supreme Court Judge Dowd decided that the Commissioner did have the discretion and must consider it for prisoners of all classifications. The prisoners have asked us to advocate on their behalf. We need your help with gathering information to assist the challenge.

The use of segregation of prisoners as punishment has been increasing recently in Australia, the US, and the UK. Segregation can be used for protection or punishment, but in both cases it results in extreme psychological stress. An indication that segregation is being over-used is the appearance of deaths in custody from suicide of those placed in segregation.

Where the Norm is Not the Norm: Goulburn Correctional Centre and the Harm-U

In the absence of public policy, this paper is an attempt to shine a light through the rhetoric and test for coherency in the policy and function of NSW's only supermax prison, the High Risk Management Unit. Its present use will be compared with the 'vision' flogged by the Premier and the Department of Corrective Services (the Department) at its inception in 2001.

The prisoners are deprived of all basics and made to earn small things in order to survive. DCS do this until the prisoner's head caves in or self harms. Once the damage is done DCS send them to the Long Bay Mental Health Facility and put them on drugs to control them.

Before my conversion in 1990 I was completely illiterate, extremely fearful of all adults due to the fact, I had been sexually abused by four adult males. I lived in a fantasy world, crying out for someone to love me and looking for somewhere to belong. By the age of 14 I was an alcoholic and a petrol sniffer and basically uncontrollable. I only write this so you have some idea of where I was at when God reached deep into my soul and washed me clean with the blood of Christ.

All the world's a prison

Some of us are more locked up than others i.e. you may be out herein "minimum security" but are as likely to go to prison as anyone else these days.

State of the Prison System

US: According to the latest statistics from the U.S. Department of Justice, more than 2.3 million men and women are now behind bars in the United States. Yes, the country that touts itself as the "land of the free" and the champion of freedom around the world incarcerates a higher percentage of its people than any other country.

We call for the elimination of all control units in prisons in the United $tates.