On tuesday 3rd May, a couple of intrepid media activists will start a 110 mile cycle to bring a heavy old tricycle from Dorset to London. On arrival, the rusty old workhorse will be de-rusted, painted and then equipped with laptops, wifi and a hefty 12 volt power system.

It is estimated that the gruelling delivery journey will take four days if all goes well. The two cyclists will take it in turns to pedal while the other rest on the back of the trike. Attempts will be made to hitch a lift back to London with the huge trike but it's considered pretty unlikely to work. During the trip leaflets about Indymedia and the G8 bike carvan will be distributed to curious bystanders.

If you happen to be driving from the South Coast to London with an empty van, trailer or a large roof rack, perhaps you could offer a lift. If you live on route then offers of crash space would be much appreciated. 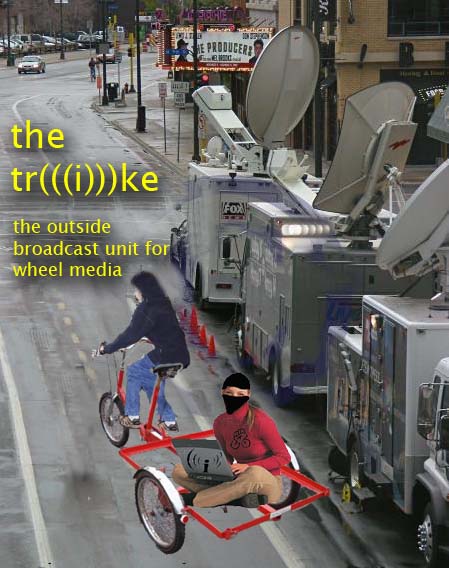 Nicknamed 'the tr(((i)))ke' it is planned to fulfil various roles, the most obvious being a mobile indymedia access point. It will be taken to big public events and protests etc where people would be able to submit their digital photos, compressed video or audio clips, as well as type
up written reports. These will be uploaded to indymedia via wireless internet connectivity at the earliest opportunity. If an open wifi node is available at the scene, a webcam will provide live video streaming from location.

The tr(((i)))ke will promote DIY media and the open publishing concept and will be utilised as an mobile info point with paper publications such as Indymedia Offline and SchNEWS available for distribution. It will hopefully be a shared resource providing an convenient platform for: guerrilla video screening projects such as Lifecycles; a mobile Hacklab for open source software workshops; a visual promotion of sustainable transportation, and equipped with a few solar panels, a renewable energy demonstration.

- Multicard reader to allow people to upload photos from almost any digital camera.

- Microphones for live interviews and sound-scape, either recorded or streamed live.

- Provision for outdoor screening (with access to massive activist video archive on harddisk).

This project has no funding and costs so far (apart from an impromptu benefit by Audio Trauma at the rampART last month) have been covered by by the individuals putting the system together. With it's total cost estimated at around 600 pounds, donations would be most welcome.

If you know of any possible transport to get the tr(((i)))ke to scotland for July, please get intouch.