General Election Candidates Lorna Fitzsimons (Labour) and Paul Rowen (Lib Dem) have both supported calls for a permanent memorial to all those who have suffered as a result of asbestos exposure. The pledge was made as dozens of people attended a candlelit vigil outside Rochdale Town Hall for International Workers' Memorial Day. 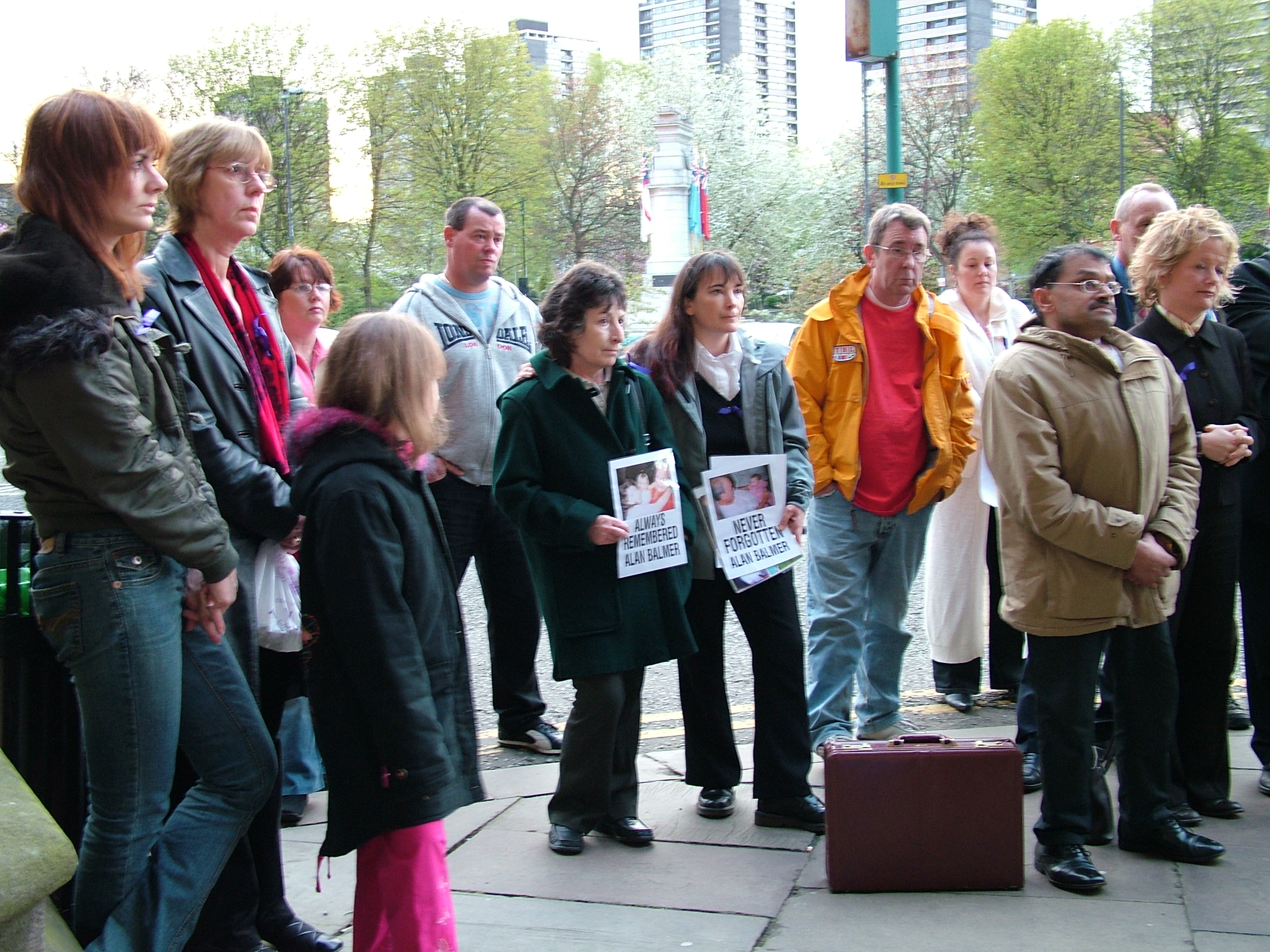 we will never forget those who have suffered from asbestos exposure...

Rochdale was the birthplace of the world’s modern asbestos industry.

Until 1948, the headquarters of the world’s largest asbestos factory, Turner and Newall (T&N) was in Rochdale.
Decisions made in those offices have affected the lives of hundreds of thousands of people worldwide.

The world’s first victim of asbestos was a Rochdale woman called Nellie Kershaw. This was in 1924.

Countless people have since died as asbestos related illnesses, in Rochdale, Britain and worldwide. People are dying today. The peak deaths are not expected until next decade.

Wherever there is asbestos –there appears to be huge profits. But at what cost?

The story of asbestos appears to be one of denial, aggressive tactics and avoidance of responsibility. This still seems true in 2005.

In 1924, when indisputable medical evidence was presented to the asbestos company the directors replied with ‘media spin’ about what a wonderful company they were and how they received government praise. Does this sound familiar in 2005?

In 1924, the asbestos company aggressively denied liability. They wrote:
“We repudiate the term ‘asbestos poisoning’. Asbestos is not poisonous and no definition or knowledge of such a disease exists”.
Could such ‘weasel words’ to avoid liability for potentially dangerous activity be used in 2005?

As she became ill in late 1922, Nellie Kershaw pleaded her employer to allow a payment of sickness benefit.
She wrote:
“I have been at home 9 weeks now and have not received a penny… I am needing nourishments”.

The company never paid a penny.

At the inquest, the works manager testified that the factory produced little dust.

The company rebuffed the widower’s request even for modest funeral expenses.
A memo from one of the firm’s managers advised that doing so “would create a precedent”.

Nellie Kershaw lies in an unmarked ‘paupers’ grave in Rochdale cemetery. She died aged 33- a mother to 2 children.

Today, on Workers Memorial Day 2005, we ask that a simple stone be placed in Rochdale’s memorial garden to remember all the victims of asbestos disease.

Plans have been submitted to build over 600 homes and a children's nursery on the former asbestos factory site.

The local community has faced the destruction of hundreds of trees in woodlands around the asbestos factory.

The developers have stated: "of particular note is the abscence of any asbestos contamination" -this has been proven to be incorrect.

Asbestos removal workers have been seen on site removing sacks of blue, brown and white asbestos. protective suits and masks were only worn properly when they were spotted by local people. When asked what they were doing, local people were told that "just a bit of rubbish was being removed" that had been put there recently by local troublemakers. IF SAID,THESE ARE DANGEROUS, IRRESPONSIBLE LIES. The asbestos being removed formed part of a huge asbestos tip that had been in operation from the early 1940's. The exposed tree roots were found UNDER tree roots. Without the benefit of a time machine how could 'local trouble makers' have put many tonnes of asbestos waste UNDER mature trees?

Rather than facing the facts about asbestos contamination, the development company, Countryside Properties, has been buying up similar sounding domain names to the community campaign called Save Spodden Valley.

Asbestos can kill. Avoiding the issues does not keep people safe.

We plead that the site of what was the world’s first, then largest asbestos textile factory be treated with the utmost respect. Countless people have died because of the decisions and products made in the Spodden Valley. To disturb parts of the site may release decades-old asbestos dust into the air. Irresponsible development of the site could affect future generations of Rochdalians.

Many say: “Let the soil rest in peace. Like Nelly Kershaw and all those who died after her and those who are still suffering from the effects of asbestos today.

We ask all those with responsibilities for the Spodden Valley site to:

-Remember the victims of asbestos related disease
-Please respect our environment and wildlife habitats
-Ensure there is public access to all the facts and decisions
-Involve the whole community in its future
-Keep the people of Rochdale safe, now and for the generations to come.