Downing street and Whitehall blockaded by refugees holding a 'Die In'.

Today over 200 human rights campaigners (most of them Sudanese refugees) blockaded Downing Street and part of Whitehall to protest over government inaction over the genocide in Darfur, Sudan. Many of the demonstraters carried the names of some of the estimated 300,000 people that have been murdered during the ethnic cleansing or have died as a result of it. 3,000 people are dying in the region every week, thats 52 9/11s every year!

The Police were taken completely by surprise by the action and had no choice but to let it go ahead. They were outnumbered by about 20-1. There were no arrests.

The international community could easily act to stop what is a totally preventable trajedy of biblical proportions. This would cost a fraction of the money spent murdering 100,000 civilians in Iraq. But there is no oil in Darfur is there? 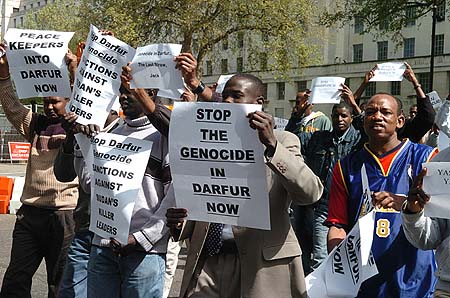 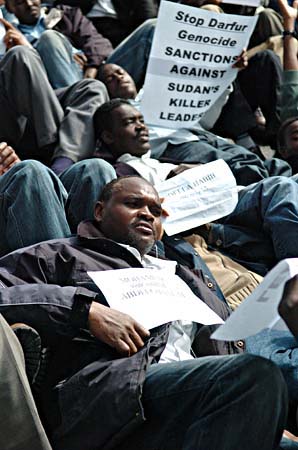 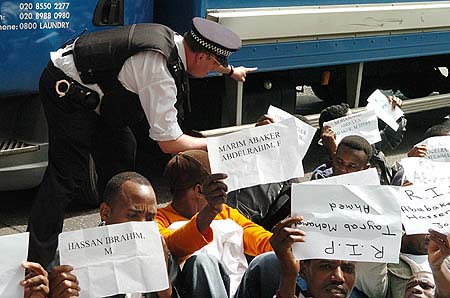 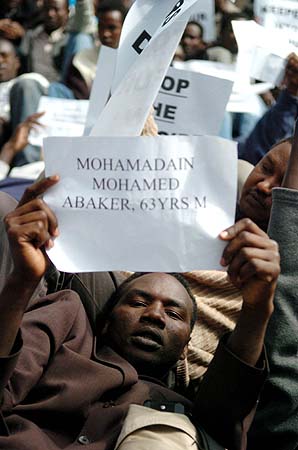 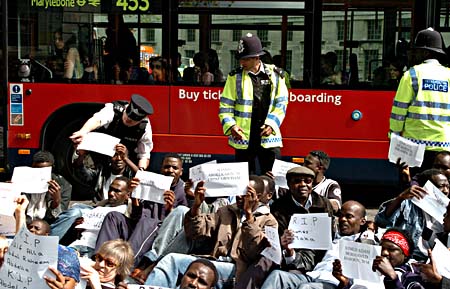 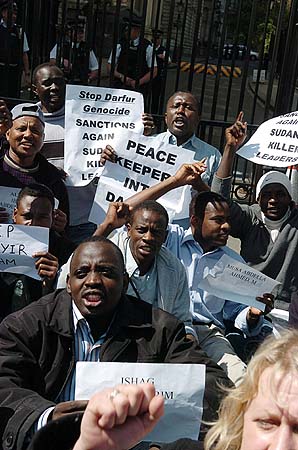 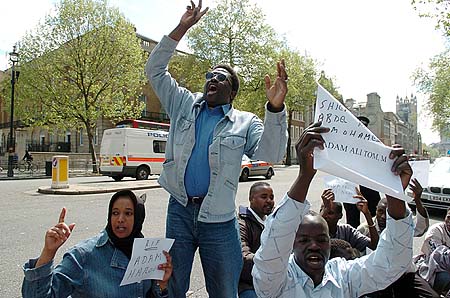 Something to shout about. 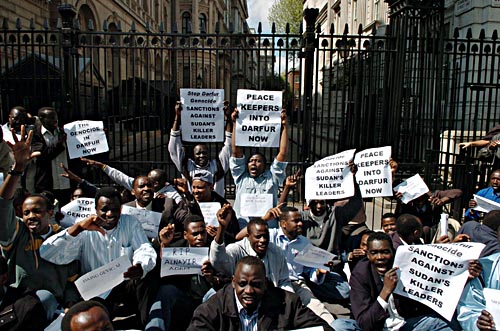 The pizza ordered by the Blairs was cold by the time it got there.

THE FOLLOWING IS FROM THE DEMO ORGANISER'S PRESS RELEASE:

”We urge Tony Blair, Michael Howard and Charles Kennedy to pledge action to halt the genocide in Darfur,”

“The Prime Minister’s commitment to Africa is meaningless while his government takes no serious action to stop the mass slaughter and starvation in southern Sudan.

“The Darfur crisis is a litmus test of Britain’s willingness to enforce international law and challenge murderous, tyrannical regimes.

“Every political party should be committed to tough measures to end the killings in Darfur. We want cross-party agreement to tackle the tragedy in Sudan and to bring the killers to justice in the International Criminal Court,”
Sudan.


“We call on UK party leaders to press the EU and UN to initiate an immediate four-point action plan to stop the slaughter and starvation,”

- “Send into Darfur a 15,000-strong African Union peace-keeping force to protect the civilian population and aid workers, keep the warring factions apart and disarm the militias

- “Provide food, clothing, shelter and medical care to the victims of the conflict

- “Impose sanctions against the Sudanese government leaders and the leaders of the Janjaweed militia, including an arms embargo an assets freeze and arraignment before the International Criminal Court on charges of war crimes, torture and crimes against humanity,”

“According to the 1948 Genocide Convention, we all have a moral duty to act when genocide happens. We are guilty if we do not try to stop it.

“The UN report on Darfur was all words and no action. It was a cruel betrayal of black Africans who are being slaughtered by Arab Islamists. These killings are racially motivated and the UN’s failure to condemn them as genocide is craven appeasement of the Sudanese government and the Janjaweed militia,”

“The UN’s condemnation of the mass killing, torture and rape in Darfur doesn’t go far enough. Saying the human rights abuses merit prosecution by the International Criminal Court at some point in the future does nothing to halt the current massacres.