On May 3rd, Press Freedom Day, the International Federation of Journalists together with Statewatch, launched a new report on the impact of the war on terrorism on civil liberties and press freedom. 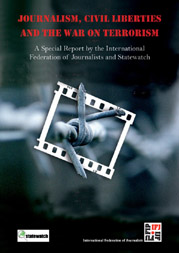 A new report on the impact of the war on terrorism on civil liberties should set alarm bells ringing around the world of journalism, says the International Federation of Journalists today.

The IFJ, the world's largest journalists' group has chosen World Press Freedom Day 2005 to launch its 56-page assessment of how civil liberties and free expression are being sacrificed by democratic states in the name of security.

"The response by governments to the threat of terrorism is out of all proportion," says the report. "The war on terrorism amounts to a devastating challenge to the global culture of human rights and civil liberties established almost 60 years ago."

The report, produced jointly by the IFJ and the civil liberties group Statewatch, says:

a.. Media and independent journalism suffer in a "pervasive atmosphere of paranoia" which is leading to dangerous levels of self-censorship

b.. Dissent inside and outside media is being restricted

c.. Fundamental rights to a fair trial are routinely violated

d.. Governments are covertly creating massive databanks for surveillance of their citizens

e.. New international rules are being agreed in a secret process of "policy laundering"

The report, which includes an analysis of current policy developments as well as a survey of some 20 selected countries, concludes that around half of the minimum standards set out in the Universal Declaration of on Human Rights are being undermined by the war on terrorism.

"An atmosphere of fear and uncertainty is being created and civil liberties are being torn to shreds, even in states with a reputation for tolerance and pluralism," said Aidan White, IFJ General Secretary at the launch of the report today. "World Press Freedom Day is the right moment to demand a return to transparency, open government and free expression for all."

"Everyone agrees with steps taken to ensure public safety against terrorist attacks," said Tony Bunyan, Statewatch Director. "But a lot of the measures brought in have little or nothing to do with combating terrorism. This report is an alarm call to democracies - in the name of the "politics of fear" we are in great danger of sleepwalking into a surveillance society and that democratic values we have taken for granted are being sacrificed in the 'war on terrorism'".

The report, which says governments are increasingly working together through international fora such as G8 to circumvent national resistance to attacks on civil liberties documents show increased police powers and data collection and surveillance "on an unprecedented and global scale have granted extensive new powers to the state."

The authors claim these powers undermine democratic standards, "because they are introduced in covert processes which are largely secret and outside the orbit of parliamentary accountability. At the same time they are leading to the creation of a surveillance society in which the citizen is increasingly accountable to the authorities and the state." The report dubs this process "policy laundering."

A first draft of the conclusions of the report were dealt with at an international conference held in Bilbao, Spain, last month where participants called for the creation of a broad coalition of interest groups ? including journalists, trade union and human rights campaigners ? to campaign against further attacks on civil liberties and democratic rights.

The report and the recommendations of the Bilbao conference will be considered by the global leadership of the IFJ which meets in Rome next month.

The IFJ represents over 500,000 journalists in more than 110 countries