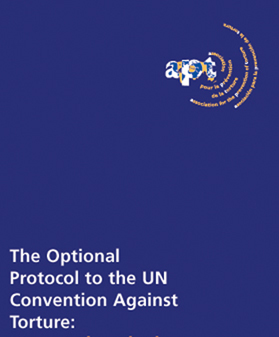 What needs to be done now?

The Optional Protocol requires 20 ratifications to enter into force.

All States Parties to the UN Convention against Torture should seriously consider ratifying the OPCAT as soon as possible.

National Institutions and others promoting the human rights of people deprived of their liberty need to be informed of their potential role as national preventive mechanisms under the OPCAT.

National debates on the prevention of torture should be encouraged in light of the adoption of the OPCAT.

Civil Society should actively promote and be engaged in the process of the ratification and implementation of the OPCAT.

Founded in 1977 by Jean-Jacques Gautier and based in Geneva, Switzerland, the Association for the Prevention of Torture (APT) is an independent non-governmental organization committed to prevent torture and other forms of ill-treatment.

The APT supports national implementation of standards that prohibit torture and develops training programmes and other activities for professionals in contact with detainees. Its specificity lies in the promotion of preventive control mechanisms such as visits to places of detention. The APT therefore played a central role in the realisation of the Optional Protocol to the UN Convention against Torture.

What is the Optional Protocol?

On 18 December 2002, the UN General Assembly adopted the Optional Protocol to the UN Convention against Torture (OPCAT). The aim of the OPCAT is to prevent torture and other forms of ill treatment by establishing a system of regular visits to places of detention carried out by independent international and national bodies.

Only States that have ratified or acceded to the UN Convention against Torture can ratify or accede to the OPCAT.

Why is it needed?

Despite the fact that torture and other forms of illtreatment are prohibited under international law, these abuses still continue to be widespread.

How do visits prevent torture and other forms of ill-treatment?

Practical experience has shown that visits to places of detention are one of the most effective means to prevent torture and to improve conditions of detention.

Visits not only have a deterrent effect but they also enable experts to examine, at first hand, the treatment of persons deprived of their liberty and their conditions of detention.

Many problems stem from inadequate systems which can be improved through regular monitoring.

The visiting experts are able to make recommendations for improvements and to establish constructive dialogue with the authorities concerned in order to help them resolve problems observed.

How will the Optional Protocol work?

The first body within this system of visits will be a new international body, a "Sub-Committee" to the Committee against Torture. This body will initially consist of 10 independent, multi-disciplinary experts, who will conduct regular visits to places of detention in all States Parties.

The second part of this system will be visits conducted by national bodies. When the OPCAT enters into force, within one year of ratifying or acceding to it, States Parties must have in place one or several national preventive mechanisms. No particular type of national mechanism is specified, therefore Human Rights Commissions, Ombudsmen, Parliamentary Commissions, or NGOs, could be designated to carry out this function.

States Parties must ensure that these national bodies function without any interference from the State authorities.

What will the visiting bodies do?

Both the international and national bodies will conduct regular visits to any place of detention and can hold private interviews with persons of their choice. Following their visits, these bodies will make recommendations for improvements in the treatment and the conditions of detention of persons deprived of their liberty. In order to establish an atmosphere of co-operation, the report of the Sub-Committee will be confidential, unless the State Party concerned gives its consent for the publication of the report or fails to co-operate with the visiting experts.

Confidentiality is not a requirement for the national visiting bodies. These bodies will then continue to work with the relevant authorities on the implementation of their recommendations. They will also work closely together, exchanging information and advice.

What places will be visited?

The use of segregation of prisoners as punishment has been increasing recently in Australia, the US, and the UK. Segregation can be used for protection or punishment, but in both cases it results in extreme psychological stress. An indication that segregation is being over-used is the appearance of deaths in custody from suicide of those placed in segregation.

US: Torture, illegal detention and other human rights abuses have always been weapons used by the US government to crush resistance. Today we see a terrifying escalation in that repression, whether against Iraqis and Afghans half a world away' or immigrants, prisoners and political activists here at home. Our strength lies in building on the experiences of those who resist-here in the US, in Latin America, Palestine, the Philippines, the Caribbean, and in countless communities throughout the world. Faced with the globalization of repression, how can we globalize our resistance?

Federal Opposition Leader Kim Beazley says if Mamdouh Habib is entitled to any compensation for his detention and alleged torture it cannot come from the Australian Government.

An Iranian asylum seeker was denied access to psychiatric help, despite slashing himself several times inside South Australia's Baxter detention centre, the Federal Court in Adelaide has heard.

Rau ordeal prompts call for separate Qld inquiry but the community calls for a public inquiry!

The Queensland Government has been urged to hold its own inquiry into mental health and corrective services in light of the Cornelia Rau case.
The Queensland Alliance, which represents mental health and prisoner groups, says Ms Rau's treatment after she was picked up by police on Cape York Peninsula exposes significant systematic failings.

Baxter,'akin to the time in Nazi Germany'

I went to Baxter this Easter just past, and became more aware that this time is akin to the time in Nazi Germany when the concentration camps were being set up.

To their shame, and for some of them, to their demise, the citizens then did nothing while their government set up these camps, and rounded up the "undesirables." The Jews, the unionists, independent women, gypsies, gays and other classed as deviants.

How can I sit by while that happens again? How can you?

The private global corporation running the detention centres makes money off of the incarceration of children kidnapped from primary schools, and off of mental patients tortured for months, and off of people who have committed no crime and who are accused of no crime, who are locked up for nothing but fleeing for their lives and seeking asylum here.

Where the Norm is Not the Norm: Goulburn Correctional Centre and the Harm-U

In the absence of public policy, this paper is an attempt to shine a light through the rhetoric and test for coherency in the policy and function of NSW's only supermax prison, the High Risk Management Unit. Its present use will be compared with the 'vision' flogged by the Premier and the Department of Corrective Services (the Department) at its inception in 2001.

The prisoners are deprived of all basics and made to earn small things in order to survive. DCS do this until the prisoner's head caves in or self harms. Once the damage is done DCS send them to the Long Bay Mental Health Facility and put them on drugs to control them.