Much of the post-war corporate activity in Iraq has come under heavy criticism from many different fronts. There are accusations of corruption, bribery and nepotism as well as simple incompetence - the jobs just aren't getting done... So what is all the `reconstruction' activity in Iraq really about? Supposedly post-war Iraq is a neo-liberal utopia, an economy freed of the tiresome and inefficient burdens of government regulation. Yet an examination of this same economy may lead one to conclude that the system as it stands is rampant with inefficiency. Indeed Iraq's economy today looks less like an economic utopia than a giant money-laundering operation... 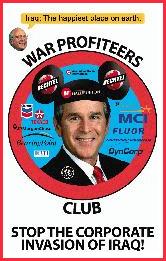 The Bush administration's post-war vision for Iraq is a matter of record: Iraq should become a utopia of laissez-faire economics for the rest of the world to see. The orders of the Coalition Provisional Authority, under Paul Bremer, are consistent with this vision: Corporate tax was slashed, tariffs and border controls were erased, state-owned utilities (with the exception of the oil utilities) were declared available for privatisation with no requirements for reinvesting profit back into Iraq. The thinking behind these measures comes courtesy of Milton Friedman: Greed is the driving force behind economic activity and the market provides the most efficient method of organising this activity; in particular the market provides the most efficient method of producing and distributing goods and services: If companies are allowed to go about their business without interference from governments then the burdens of bureaucracy and red-tape, and the leakage of waste, can be eliminated and everyone benefits. (An example of how far this idea can be pushed is the USAID decision to contract a private company to oversee Iraq's "transition to a sustainable market-driven economic system". In other words the very process of privatisation and liberalisation was itself privatised and Bearing Point, an offshoot of KPMG, won this contract.)

Whether or not one subscribes to the principles of Milton Friedman is an argument for another time. What is interesting here is to seek to apply these tests of efficiency and minimal waste to the conduct of the corporations involved in the occupation and reconstruction of Iraq: For the occupation and reconstruction of Iraq has been a largely privatised process; corporations have tendered for occupation contracts put out by the US military (e.g. Halliburton's contract to cook meals and deliver mail at US bases), for reconstruction contracts put out by USAID (e.g. Creative Associates International's contract to overhaul the Iraqi education system) and for reconstruction and other contracts handed out by occupation authorities and paid for by Iraqi oil revenues (e.g. Halliburton's contract for the Repair of Oil Infrastructure (RIO)). The first two sets of contracts were paid for by the US government out of the $87 billion that the Bush administration was granted by congress. Some $65 billion of this was used for military operations and has been mostly spent. The reconstruction element of this money, some $18 billion, remains largely unspent - instead reconstruction bills have tended to be paid using Iraqi oil revenues, rather than by the US government. In fact the Iraqi oil revenues have been used for more than just paying Halliburton; Pratap Chatterjee relates how much of this money has been "handed out in cash by soldiers to local people in return for favo[u]rs such as rebuilding offices or building football fields." He cites a New York Times article which claims that "[a]t least $1 billion has been distributed in this fashion - by some estimates more than $2 billion." (Steven Weisman, "U.S. is Quietly Spending $2.5 Billion From Iraqi Oil Revenues to Pay for Iraqi Projects," The New York Times, 21 June 2004) But what of the rest of the money, the money that's gone to the corporations?

Why such a state of affairs?

We have, then, an economic system in Iraq which, despite its being laid out along supposed principles of economic efficiency, demonstrably leaks money at every turn. But what's the point in all this? Who is allowing this to happen, and why? What is the advantage in wasting all this wealth? The answer lies in the wrong-ness of the question: This wealth is not wasted, it is redirected. It is redirected into the coffers of corporations and into the bank balances of their share holders. It will circulate around the upper reaches of society in the US and UK, swelling already bloated lifestyles. It will find its way into the campaign coffers of politicians through political donations, it will fund executive perks and bonuses; its passage through these exalted passage will buy luxuries and power and... more wealth. For the contracts will keep being handed out to the people who already have all the money; they will keep finding ways not to fulfill their obligations so that the contract can last for as long as possible. They will avoid scrutiny because the scrutineers are themselves living off the fat of this war. In the rare event that brave voices speak up about the endless gravy train, they will protest that conditions on the ground are very difficult, that the security situation is grave, that they are doing their best in a desperate situation and they will plead that we must be patient and allow the process to play itself out. War is a gift from heaven for these corporations. Their everyday `peace-time' activity is rampant enough, but the checks and balances on their activity still chafe. War provides a chance to avoid these checks, it releases massive amounts of money and creates a chaos of unaccountability and lack of regulation. In the midst of all this, money can leak away in bundles and be quietly directed towards those who desire it most - the greedy rich. A warning though: This is not to say that this is the reason we went to the war in the first place, or even that it was a factor in the decision to go to war. Instead it is simply the case that war tends to throw up situations of chaos which can be easily exploited by the wealthy and powerful. When war is prosecuted by people who have a vested interest in maintaining this chaos (as is often the case) this exploitation increases. In Iraq this process has gone one surreal step further: The economic chaos of war has itself been promoted by the US and UK as being a major benefit of the war. War has `opened the Iraqi economy to the world,' and has `freed the Iraqi economy for investment and corporate economic activity.' The creed (neo-liberalism) under which these claims are made has provided the cover for this process which amounts to little more than the pillage of Iraq and the laundering of American tax payer's money.

Sources and Other Reading

Much of the material for this article came from "Iraq, Inc." by Pratap Chatterjee. It is highly recommended background reading and provides a host of other examples of dubious corporate activity in Iraq. Naomi Klein's Baghdad Year Zero: Pillaging Iraq in pursuit of a neo-con utopia provides further background, as does Iraq Occupation Focus’ excellent fact sheet on the corporate takeover of Iraq. This article has not examined the [il]legal side of the corporate invasion of Iraq. Explanation of the dubious legal status of much of the corporate activity in Iraq is available at various places on the web: Naomi Klein’s article mentioned above discusses it, and there are various links available, including a legal briefing, in a recent IndyMedia feature.

Activism against corporate exploitation of the occupation of Iraq has been underway in the UK for more than a year. The author is involved with a group called the Corporate Pirates who have recently organised a successful week of action against a British Company called Windrush Communications. The Corporate Pirates campaign has been launched in the UK to highlight the corporate takeover of Iraq and to campaign against those companies profiteering from the war. Later this year four anti-war activists from the group face trial for laying siege to a British company Windrush Communications that facilitates the pillaging of Iraq. [Website | Email] More action is planned focusing on the `Iraqi Petroleum Conference 2005’which is taking place at The Hilton, Paddington from 29 June, a week before the G8. Before the invasion of Iraq the US drew up `sweeping plans to remake Iraq’s economy … based on free-market principles’, including the ‘mass privatisation of Iraqi industry’ – including Iraq’s oil sector (Wall Street Journal, 1 May ‘03). The Iraq Petroleum Conference will form part of this process and activists are focussed on disrupting it.