Funeral for Civil Liberties at Lancaster May Day

A funeral procession for civil liberties, dressed in Guantanamo style uniforms and led by the Grim Reaper in chains, joined Lancaster's May Day celebrations to point out the decline of civil liberties in the UK including internment, deportation and repression of protest. 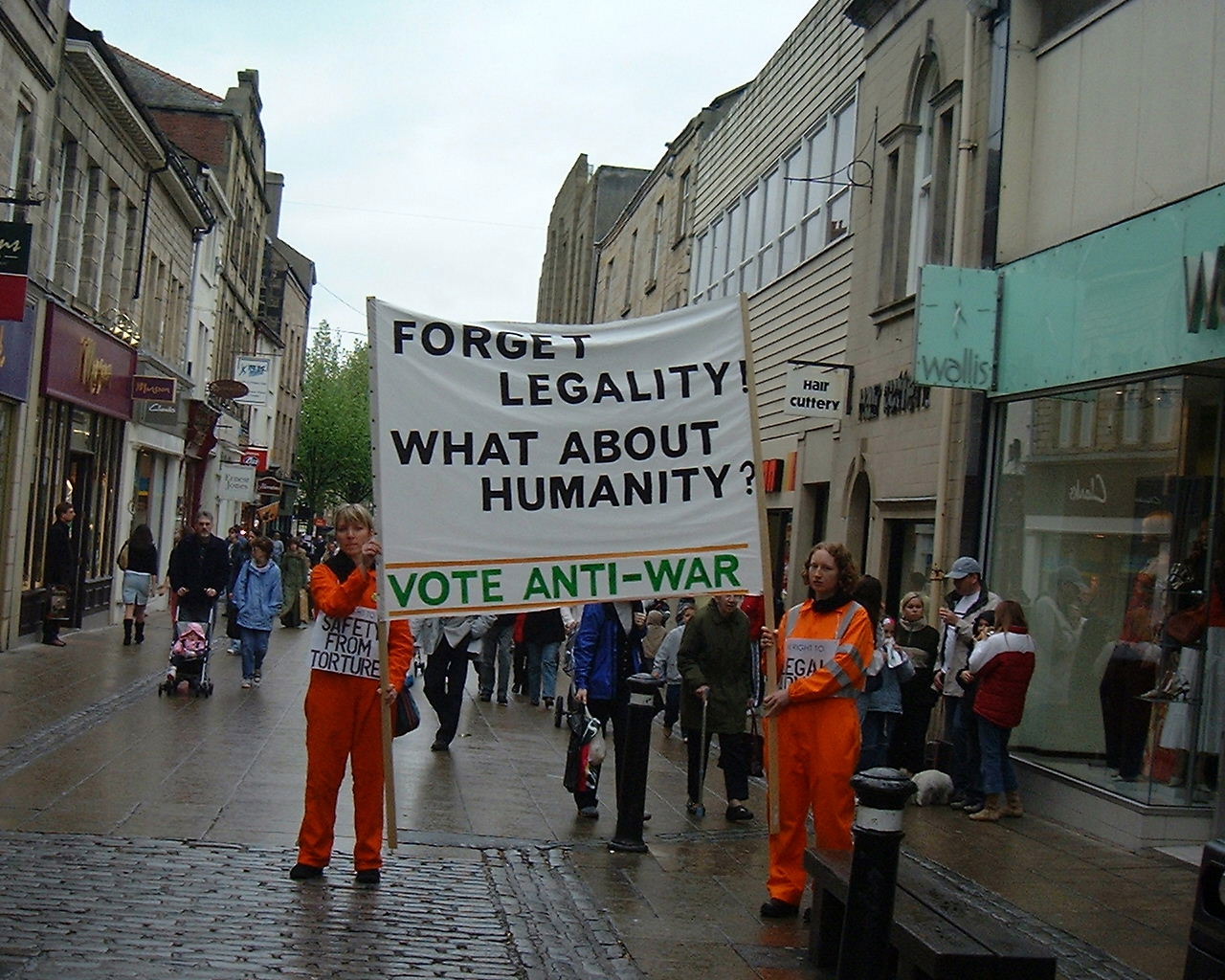 On April 30th a funeral procession for civil liberties made an appearance at the annual May Day march and rally organised by Lancaster and Morecambe TUC. Appropriately, Lancaster’s May Day this year took place under the theme of civil liberties, but most used this platform to promote various political parties, with the exception of the anti-war contingent who used the occasion to point out the decline of our civil liberties under the current government. A solemn procession donned the orange boiler suits, black masks and chains which are synonymous with Guantanamo detainees, and bore signs listing the civil rights which are under attack: habeas corpus, the right to know the charges against you, trial by jury, legal representation, protection from torture, privacy (a reference to ID cards), the right to protest, and the right to asylum. Led by the Grim Reaper, they symbolised the impending death of civil liberties in the UK. They were followed by supporters carrying an anti-war banner: ‘Forget legality – what about humanity?’ This attracted keen attention from Saturday shoppers, and a mixed response from Labour party members and trade unionists, who made up the bulk of the rest of the march.
After two swift circulations of Lancaster town centre led by Morecambe samba band Bay Beat, a rally was held in Market Square with speeches. The first speaker, a Green city councillor, was loudly heckled by Labour Party supporters as he spoke passionately about the need to defend civil liberties in the face of growing restrictions under the guise of anti-terror laws. He was followed by prospective Labour parliamentary candidate Anne Sacks, who ignored his concerns and instead delivered an astonishingly vacuous piece of drivel about Labour’s commitment to human rights symbolised by their adoption of the Human Rights Act (she forgot to mention that the Blair government have repeatedly derogated from this Act). This was greeted with jubilation from Labour supporters, and stony silence from the masked boiler suits and others. We then heard from Stephen Hoyland for the Make Poverty History Campaign, Richard Graves from Pensioners’ Rights, a Labour city councillor, Audrey Harland from CND, and Billy Pye from Lancaster and District Coalition Against the War.
However, the most memorable speaker was Rhiannon, one of the George Fox Six who are being prosecuted by Lancaster University for speaking out against the commercialisation of university research. She and five other students and graduates are charged with Aggravated Trespass for taking part in a peaceful demonstration at the university last September. They were protesting a ‘Corporate Venturing’ conference which aimed to forge links between the university and some of the world’s most unethical corporations: BAE, Shell, DuPont, GlaxoSmithKline etc. Rhiannon spoke powerfully against mounting restrictions on the right to protest, which accompany other violent attacks on civil liberties such as internment.
Despite their by turns sycophantic and disrespectful behaviour, some Labour supporters were visibly shocked and quieted by these revelations about the state of civil liberties in the UK (don’t they watch the news?). But Rhiannon had another important message for the crowd: that we can’t leave it to politicians to uphold our civil rights. The history of May Day teaches us that we must do it ourselves. How ironic that on a day which commemorates the bloody suppression of a workers’ rally, members of the governing party shouted down a speech about civil liberties and tossed leaflets defending human rights onto the ground. Reclaiming May Day in Lancaster continued with a concert and community picnic later in the weekend.
For more info on the George Fox Six and to lend your support see www.free-webspace.biz/GeorgeFox
Contact Lancaster and District Coalition Against the War at: