All you ever wanted to know about G8

On Sunday 15th May Sheffield Dissent invites you to learn more about the upcoming G8 summits (15th to 17th June in Sheffield and 6th to 8th July in Gleaneagles, Scotland) in a day of information, workshops and laughter... 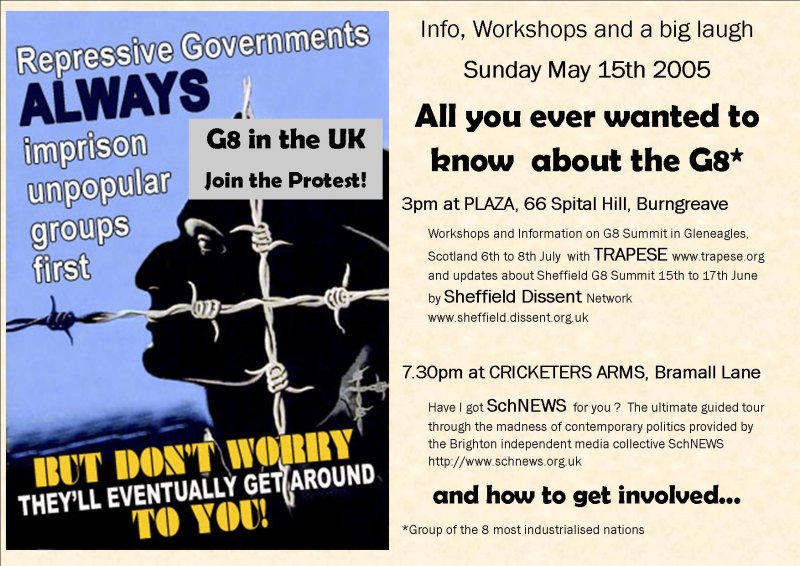 Flyer for the event

Starting from 3 pm, the popular education collective T.R.A.P.E.S.E (Take Radical Action through Popular Education and Sustainable Everything!) will provide the public with information around the G8, the group of 8 most industrialised nations, holding their annual meeting from 6th to 8th July in Gleneagles, Scotland this year.

In the build up to the 2005 G8 Summit, T.R.A.P.E.S.E is touring the UK to inspire, inform and provoke discussion about the issues behind the protests against the Scottish meeting of world leaders. “Especially since the war in Iraq, there is a real and present need to provide a space for learning about the issues behind the headlines. People are asking questions and not receiving answers and become increasingly disenfranchised with the current situation,” says Alice from Trapese.

Prior to the summit in Scotland from 15th to 17th of June the G8 ministers of Justice and Home Affairs will meet in Sheffield. Sheffield Dissent G8! Group has formed to facilitate the protest and a counter conference hold during the ministers meeting. By opening this forum they are aiming to present a truly democratic alternative and challenge to the ministers meeting behind closed doors. The G8 decides on global issues with no legitimation whatsoever. This is why Sheffield Dissent calls for the G8 to disband.

Starting at 7.30 pm at the Cricketers Arms Pub in Bramall Lane, the Brighton based alternative media collective SchNEWS will round up the day with their program “Have I got SchNEWS for you?”
Entry is free/donation.

15th May awareness day is the first of a series of [

http://www.sheffield.dissent.org.uk/timetable.html | upcoming public events] Sheffield Dissent G8! has put up to mobilise people in Sheffield for the days of the ministerial meeting here and the G8 Summit in Scotland.