The main construction entrance into the Atomic Weapons Establishment (AWE) Aldermaston has been blocked by members of the of the "Block the Builders" campaign this morning. There were seven arrests.

While the Nuclear Non-Proliferation Treaty (NPT) conference continues in New York, a peaceful blockade closed the main entrance of the AWE, blocking all access to the West Gate complex.
Only three lorries have got into the AWE this morning, and work for new weapons developments has been stopped by the blockade.

NOTE: updates and photos can be found at

"We believe that these new developments will equip the UK to test, design and build new weapons which will violate the UK's commitments under Article VI of the Nuclear Non-Proliferation Treaty (NPT)", Block the Builders stated.

The protest - which is calling on the government to come clean about its real plans for AWE Aldermaston - takes place at the same time as the NPT Review Conference in New York, where the UK delegation is coming under increasing diplomatic pressure to honour disarmament commitments made in 2000. At the last NPT Review Conference in 2000, the UK, as a nuclear-weapons state, made a series of commitments, including, "An unequivocal undertaking [by the nuclear-weapon States] to accomplish the total elimination of their nuclear arsenals leading to nuclear disarmament to which all States parties are committed under Article VI"

Despite the National Statement on 5 May 2005, made to the NPT conference by UK Ambassador John Freeman, Head of the UK Delegation, reaffirming "the UK's unwavering commitment to all its obligations under the Treaty",[1] earlier this week, the Independent revealed that Tony Blair had already decided to replace Trident with a new generation of nuclear deterrent. [2]

Work started on clearing the sites of at least two new buildings last month, following the approval in February of final planning permission for two I.T. buildings, thought to be associated with a new super-computer, and an office building for staff and contractors working on the new developments. AWE also started a major recruitment drive last month.

It is this work that has been stopped by this morning's protest, as the lorries and machinery used for clearing the site enters by the West Gate. "Block the Builders" campaigners at the protest can be contacted on 07887 802879, and the blockade is expected to continue for some time.

Notes
[1] For the text of the Ambassador's speech, see

http://www.britishembassy.gov.uk/servlet/Front?pagename=OpenMarket/Xcelerate/ShowPage&c=Page&cid=1061396428128
[2] PM secretly signs up to a new deterrent as UN tries to cut global threat, 2 May.
[3] For a summary of recent history of new developments at AWE Aldermaston, see Peace News article, Behind the Wire: UK's Pork Pies at the NPT,

http://www.aldermaston.net/articles
[4] For more information about the Block the Builders Campaign, see

So many people think that the problem of nuclear weapons is 'old hat' and was sorted long ago; and many don't realise that the UK is intending to build MORE weapons - and that this is AGAINST international law!!! How ironic that this protest happened on a day when Tony Blair announced his intention to increase support for nuclear programmes. He was talking about nuclear "energy" today (and that's bad enough...) but the subtext is that increased nuclear weaponry is also on the agenda....

Thanks so much for what you did today!

Do any of those arrested need support? Please let us know. 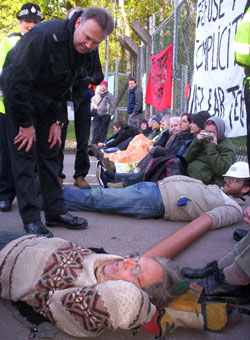 Attempts at persuasion before cutting out

A couple of those arrested are due to appear in court in the coming weeks (others on police bail/accepted cautions in order to go back and do it again). Details will be posted on the BtB site under /action/.

Further news and images (about BtB and wider campaign of resistance against developments at Aldermaston) available on the Aldermaston Women's Peace Camp site at:

About this particular action: