The article - Not Enough Official Torture in the World? The Circumstances in which Torture is Morally Justifiable - is soon to be published in the University of San Francisco Law Review? 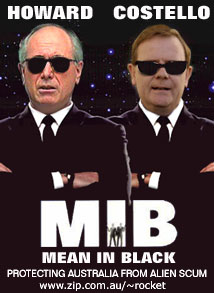 AUSTRALIA/CUBA: Two Australian academics...? Have argued that torture should be legal even if it causes the death of innocent people.

But how wrong is that? And I suppose even if the information gleaned from that torture is wrong?

Are these Australians academics? That's the next question. And what has academic got to do with common sense and social skills? Obviously Zip!

Maybe more to do with prestige rather than skill!

Fascist Prime Minister John HoWARd and Federal Treasurer Peter Costello, the man who's tipped to take his job are the 'Mean Men in Black'?

I take it, that this outcome could be so, because for far too long the Australian curriculum has not been balance between academic skills and social skills and this sort of misinformation from so called academics falls very short of human rights and standards.

Of course academic standards can also be bought and sold for prestige. So have they been encouraged by the 'Mean Men in Black'?

The later rather than the former in my opinion is more likely than not to ring true.

WARNING DON'T DO THIS AT HOME!

1) Place your finger on a hot stove!

If you were an academic in Humanities for instance, how could you go past the United Nations Standard Minimum Rules for the Treatment of Prisoners? Or everyone's inalienable right.

Furthermore, how could they not consider themselves as someone who could be tortured? Is it okay for them? Did they undertake any experiments on themselves to see if it was okay for them? Is it in their paper?

The fish always rots at the head

In the article, they argue that when many lives are in danger, "all forms of harm" may be inflicted on the suspect, even if this resulted in "annihilation".

And like I said above, even if the result is that only false and misleading information will be gleaned under duress.

In other words worthless?

This is the Mean Men in Black folks!

Not merely two academics because these two, wouldn't make an academics arsehole because they're not only embarrassing themselves, they have just critically damaged this countries reputation again, if in fact the other academics are going to even consider taking these stooges for real! And as head of a University I guess they will at least try to take them seriously.

The sinister motive of course is that the Australian Government has been caught with its pants down over many human rights abuses including torture and now seeks to justify the official truth!

Shame HoWARd Shame! What a shame!

The article - Not Enough Official Torture in the World? The Circumstances in which Torture is Morally Justifiable - is soon to be published in the University of San Francisco Law Review.

Professor Bagaric has said he expects to be criticised for his views, especially on torturing innocent people.

"Of course, it is far more repugnant to inflict harm on an innocent person than a wrongdoer," he said.

"But in some extreme cases, where it is almost certain someone has information that could prevent many lives being lost and there is no other way to obtain that information, the mere fact that they're not directly involved in creating that threat doesn't mean they can wash their hands of responsibility."

These fools should go into the Guinness Book of Records for the most academic fools in Australia's history besides John HoWARd and his cronies…The Mean Men in Black.

Persons deprived of their liberty are most at risk, as they are cut off from the outside world and solely dependent upon the authorities for their most basic needs and rights. The OPCAT offers a novel approach as no other international treaty provides for concrete steps to prevent these violations from occurring within places of detention worldwide.

Over the past three and a half years, the Howard government, in line with its embrace of the Bush administration's "war on terror" and the illegal invasions of Afghanistan and Iraq, has conducted an unrelenting assault on fundamental democratic rights.

The Opposition had signalled it would support the inquiry but after internal discussions, Labor says it does not think a Senate probe is an appropriate forum to investigate the allegations. Then what is the appropriate forum?