Defend gay Muslims persecuted by fundamentalism
17 May is “International Day Against Homophobia”
Saudi Arabia is one of the world's most homophobic countries. Gay people are routinely arrested, jailed, tortured, flogged and sometimes executed 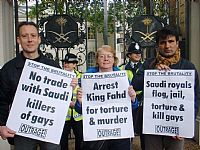 The London protest was one of hundreds of protests that took place in more than 40 countries to mark the first International Day Against Homophobia.

“We want EU and UN sanctions against the Saudi dictatorship. King Fahd should be arrested, taken to the International Criminal Court, and tried on charges of torture and murder. Britain and the EU should halt all trade with the murderous, homophobic Saudi tyranny.

His colleague, David Allison, also of OutRage!, expressed concern that Ken Livingstone has failed to back the International Day Against Homophobia (IDAHO).

”The Mayor of London failed to support the International Day Against Homophobia. Repeated requests to Ken’s office were ignored. In contrast, the Mayors of Paris, Berlin and many other cities are backing IDAHO. Why isn’t Ken giving the gay community support on this very important day in the gay calendar?”, queried Mr Allison.

”Despite terrorising gay people, and denying rights to women and religious minorities, Saudi Arabia’s fundamentalist regime enjoys friendly relations with the UK and the US. Tony Blair and George Bush sell weapons to the Saudi torturers and murderers.

”It is time the Saudi butchers were named, shamed and isolated,” urged Mr Allison.

The IDAHO protest at the Saudi Embassy was organised jointly by OutRage! and the Gay & Lesbian Humanist Association in association with the international committee of IDAHO.

”This protest signals our condemnation of the brutal persecution of Saudi lesbians and gays,” said Mr Lennard.