'Zarqawi' figment of the US imagination, used time, and time again 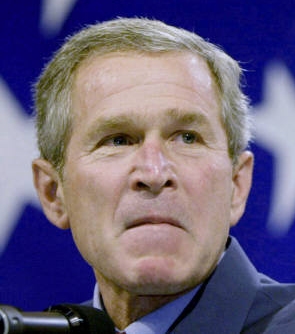 Is there a psychiatrist in the house?

US: Suffering from
multiple personality
disorders.

US propaganda 'terror monster' the alleged Al Qaeda's leader in Iraq has been used by the US and its Coalition of the Killing as an excuse so many times he has bled to death, surely?

The mainstream media either release some nonsense about what he said or did. Someone who they have captured, that he is alleged to have known - like one of his aids or friends - or some link to some terror cell.

But you don't ever see this figment of their imagination - which the Coalition uses to excuse war crimes against humanity.

The corporate media has accused this figment of Bushit's imagination, of allegedly defending the killing of some innocent Muslims in suicide bombings against US forces, saying it was permitted by Islam for the sake of jihad, according to an audiotape attributed to him.

At least that would be a more convincing lie wouldn't it?

The question is how long does the world have to put up with this nonsense?

Little Johnny said. "Mum this is what that nasty man says and does. He doesn't like us because we blew his country to bits and killed, maimed and tortured over one hundred thousand of Iraq's citizens."

Today's threat to the world straight from the horses arse, George W Bushit the War Criminal and his Coalition of Imperialists no doubt!

"The killing of infidels by any method including martyrdom (suicide) operations has been sanctified by many scholars even if it means killing innocent Muslims," Abu Musab al-Zarqawi said on the tape posted on an Islamist web site?

"This legality has been agreed upon... so as not to disrupt jihad?"

"The killing of terrorists by any method including (sacrifice) operations has been overlooked by the Coalition of the Killing even if it means killing innocent people of a Sovereign Nation," George W Bushit said on tape posted on an American web site."

This has been illegally agreed upon…so as not to disrupt the free flow of oil."

Meanwhile back at the ranch!

The US military, Iraq's biggest foe, quotes US scholars to justify the loss of Muslim lives in the war on Iraq.

Their message appears aimed at winning United Nations support for their pre-emptive, illegal and degrading war on Iraq.

"The shedding of Muslim blood... is allowed in order to avoid the greater evil of disrupting future reserves of oil to the US."

The authenticity of the tape could not be verified and it was not clear when it was recorded. But it's not a figment of your own imagination and you don't suffer from delusions or have a multiple personality disorder. Do you?

Well we know for sure Dubya is blowing Iraqi's to bits and we also know he not doing it in the USA where he lives. But is doing it in some other country called Iraq?

Therefore perhaps the real monster should come on down to the Hague War Crimes Tribunal, cuffed to HoWARd and Blair instead of purporting propaganda to the rest of the world night after night, day after day, whilst the powers that be, ever increase our security rating for their illegal and degrading war on Iraq.

Which includes Queen Elizabeth downgrading of human beings to silicon chips - insisting that everyone in the UK get their eyes and fingerprints scanned on a card of some type - that won't be used to profile any innocent citizen as a terrorist? - Who can be innocently Tortured? by the state no doubt?

More than 400 people have been killed in an escalating cycle of war, violence and suicide attacks since a puppet Iraqi Government was named late last month.

Bushit's group has not claimed any responsibility for most of those attacks.

The speaker says it is crucial to step up attacks to weaken the terrorists of Iraq by using the modern military might of the US Empire and its allies.

"These operations are our lethal weapons against the enemy," he said.

"God knows that we were careful not to kill innocent Muslims but its just collateral damage and we have called off many operations in the past to avoid losses... but we cannot kill terrorists without killing some innocent men, women and children. It is unavoidable.

"We know that some mistakes may happen and victims may fall and this causes us grief, but what can we do in the face of this reality in which the we have penetrated their land to offer them our freedom and democracy. They should be thankfull," he said.

He says the military who are killed unintentionally in such attacks are " heroes who died for their country".

The speaker blasted Abu Musab al-Zarqawi, calling him a "demon that was a terrorist that spearheaded every effort to pre-emptively prevent occupation by the Coalition of the Willing."

Iraq's lost power to the county's majority after the US war toppled Saddam Hussein.

Addressing Americans, the speaker added: "We are the leaders of democracy and of the liberty of the US (Empire). And its first line of defence in the face of the evil terrorists' is a pre-emptive strike. If the terrorist's power doesn't subside then we will fight them and we will win at any cost.

Aussie's fate over the edge as violence spreads

Other sources say, that Abu Musab Al-Zarqawi is just another invisible demon. Never bin seen or caught by them, but who has provided the Coalition with all the excuses in the world - for their continued terror campaign. This propaganda (figment of their 'own' imagination) has been used ever since the capture of Saddam Hussain.

The article - Not Enough Official Torture in the World? The Circumstances in which Torture is Morally Justifiable - is soon to be published in the University of San Francisco Law Review?