THis is a 500 word piece with one photo about the scarcely publicised WEF meeting which is taking place in Jordan this weeekend. 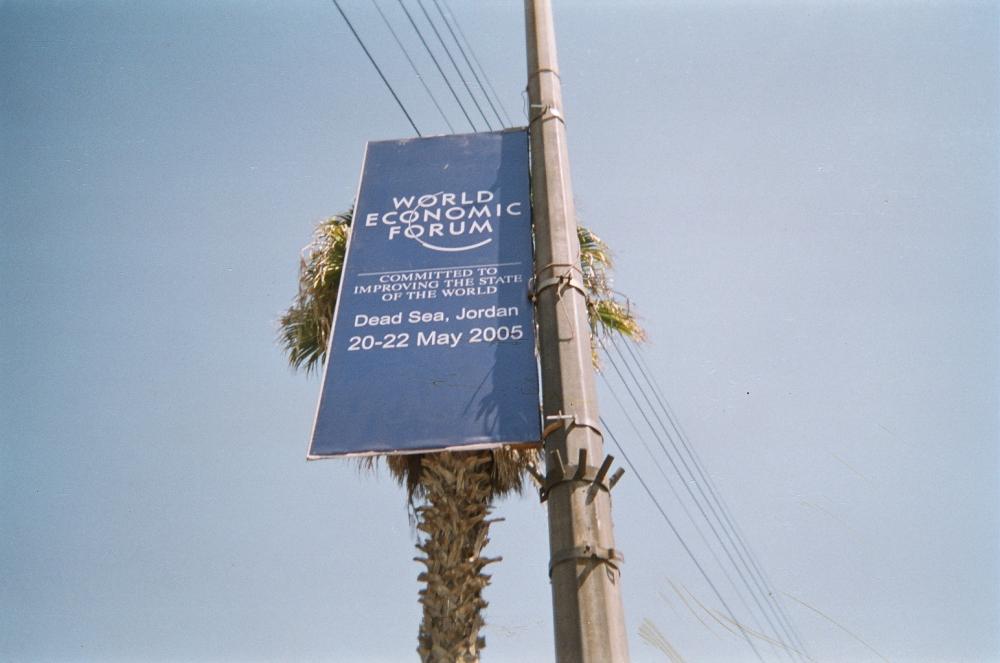 Poster advertising the WEF in Jordan.

THIS WEEKEND AT THE DEAD SEA


While all of us are understandably thinking of Gleneagles in Scotland in July an event of similar significance is taking place this very weekend in the Dead Sea area of Jordan.

It's the jolly old WEF – World Economic Forum - where the Jordan Times business news reports that `more than 1,300 participants confirm attendance at WEF`.

`According to (Jordanian) finance minister Bassem Awadallah, who is in charge of the WEF portfolio, the list of participants includes key politicians and businessmen from the Middle East, Asia, Africa the EU and the US. "Over three days, attendees will engage in discussing a wide spectrum of topics under the theme `seizing the moment` he said.

The summit will be preceded by a meeting of Arab and Group of 8 Education ministers who will draft a strategic plan for improving education in the Arab World and will be followed by a meeting of Nobel Prize winners in Petra who will gather to discuss key issues affecting the world.


The exact venue is not given – presumably for security reasons but could well be in one of the three plush hotels on the Jordanian side of the Dead Sea. It'll not be as luxurious as the Gleneagles but rather more up market than the Al-Monzer hotel where I have been staying – that's just 6 JD (8 pounds) a night!

Today's Jordan Times informs us that the gorgeous Queen Rania, wife of King Abdullah, will be there to further women's initiatives at the WEF. Other International figures taking part will include greying American actor Richard Gere (star of `American Gigolo`, `Pretty Woman` etc) although what his participation will involve I can only guess. He is an advocate of Chinese withdrawal from Tibet. I don't suppose he's come to plug his latest film whatever that is.

So the WEF while smaller in scale than the G8 does have some big guns taking part. I'd be there to hurl a few insults at them but I fly home tonight from Amman.

Hopefully we shall all meet in Perthshire for coffee and cakes at Gleneagles in July. A nice coffee with Bush, Blair, Berlusconi and co would be rather jolly though a latte is £3.75 and a sandwich is £10.00. Still I'm sure nice Mr Brown would treat us after his exertions on the `make poverty history day` in Edinburgh on July 2nd and his committment to wipe out deprivation worldwide – presumably including Scotland.


Toodleoo chaps and chapesses, see you in the summer!