Sheffield Company A4e recently won a contract with Israel which breaks international law because it involves working in the illegally occupied area of East Jerusalem. The article below explains in more detail. 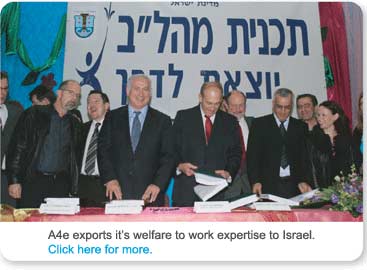 How Britain helps Israel From Ali Abunimah in Washington

April 14th, 2005 — The British government assisted a leading company in the UK to obtain a lucrative contract with Israel which violates British policy and international law on the status of occupied East Jerusalem, an MEI investigation has revealed.

Under the contract, signed with the Israeli Ministry of Finance on 1 February, Sheffield-based consultancy firm A4e will establish an employment centre in Jerusalem and operate programmes as part of the "Israel Works" welfare reform scheme.

Israel Works, modelled on a programme in the American state of Wisconsin, is the brainchild of Israeli Finance Minister Benyamin Netanyahu, who on 29 March called on Israel to formally annex more of the occupied West Bank. A4e has worked closely with the British government in the past. In 2003-2004 it managed over £200m of public sector funding on behalf of a range of UK government agencies. It claims to be one of the fastest-growing companies in Britain and boasts that it "places a lot of importance on corporate social responsibility".

"Jerusalem was our first-choice location and I am delighted we secured the pilot area," said A4e's CEO Mark Lovell on 1 February in a press release posted on the website of the British embassy in Tel Aviv. "Jerusalem has similarities to areas like Manchester, where we have achieved results in the UK over the last ten years," he added.

Lovell said nothing of the fact that Manchester, whatever similarities it may possess to Jerusalem, is not under foreign military occupation. Nor is it the subject of numerous United Nations Security Council resolutions. The Israeli Finance Ministry's public affairs office confirmed to MEI on 24 March that the scheme to be operated by A4e "includes neighbourhoods in East Jerusalem". Separately, this was confirmed by Iris Ginsburg, an official in the budget department of the Finance Ministry.

Under international law East Jerusalem is occupied territory and is emphatically not part of the state of Israel. After the 1967 war Israel illegally expanded the city's municipal boundaries, confiscated large tracts of Palestinian-owned land and has, in violation of international law, established vast Jewish-only settlements in the occupied section of the city. In 1980, Israel extended its domestic law to East Jerusalem, prompting the Security Council to pass Resolution 478, which declared:

"All legislative and administrative measures and actions taken by Israel, the occupying power, which have altered or purport to alter the character and status of the Holy City of Jerusalem, and in particular the recent 'basic law' on Jerusalem, are null and void and must be rescinded forthwith."

In its formal policy statement on Jerusalem, the British government reaffirms its support for the unanimously passed Resolution 478 and elaborates that it "recognizes that Israel exercises de facto authority in West Jerusalem and, from 1950 to 1967, recognized that Jordan exercised de facto authority in East Jerusalem". "Since the war of 1967," the statement continues, Britain "has regarded Israel as being in military occupation of East Jerusalem, and in this connection subject to the rules of law applicable to such an occupation, in particular the Fourth Geneva Convention of 1949... the provisions of Security Council Resolution 242 on the withdrawal of Israeli armed forces from territories occupied in the 1967 war applies to East Jerusalem."

In deference to this policy, the British embassy in Tel Aviv has no jurisdiction over East Jerusalem and is supposed to undertake no activities there. British interests in the Occupied Territories, including East Jerusalem, are represented by a separate Consulate-General in the Shaykh Jarrah district that maintains relations with the Palestinian Authority.

Yet MEI's investigation shows conclusively that the embassy in Tel Aviv assisted A4e to obtain the Israeli contract covering East Jerusalem. In an email response to MEI on 17 March, Peter Stephenson, the director of the UK Trade and Investment office (UKTI) at the Tel Aviv embassy confirmed that the British government had assisted A4e in winning the Israeli contract. A4e "have shown commendable commitment in this [bidding] process and UKTI have been very supportive of their efforts. A4e have come to us for advice on a number of issues relating to working in Israel and we have been delighted to offer this," Stephenson wrote.

"A4e is still in the early stages of planning the implementation of the Pilot Welfare-to-Work Programme in Israel, with our first employment centre due to be opened in a few months. At this stage we have yet to receive confirmation of the exact areas of our intended operation. We expect to receive such confirmation in due course. In the meantime, we continue to maintain contact with the British embassy."

Despite a direct request from MEI, A4e offered no assurance that it would refuse to work in East Jerusalem or any Israeli settlements.

MEI referred McKee's reply to Peter Stephenson at the British embassy and asked for a clear assurance that A4e would not be working in East Jerusalem in light of the fact that it had received such extensive assistance from British officials.

After an initially evasive response, which merely referred MEI back to McKee's vague statement, Stephenson wrote on 23 March: "We have already advised A4e that, as British government policy clearly states, we cannot and will not support any work emanating from this winning bid if it covers operations in East Jerusalem and the surrounding settlements that have been annexed to the city by Israel."

The evidence, however, is that the British embassy did help A4e to obtain work in which it will profit from Israel's illegal annexation and occupation of East Jerusalem. Basic knowledge of Israel's policy on Jerusalem and simple enquiries to the Israeli government would have been sufficient to establish that "Israel Works" covers East Jerusalem and thus, in breach of international law and UK policy, extends Israel's administrative and legal structures into the city. Had the British embassy made these enquiries it would, by its own policy, have had to refrain from rendering any assistance or support to A4e.

It is unclear whether the British embassy failed to ask these questions due to some unusual lapse or whether it turned a blind eye in order to advance the commercial interests of a private company. In either case, British actions on the ground come at a particularly sensitive time, when Israel continues to announce aggressive plans to expand the settlement of Ma'aleh Adumim, east of Jerusalem, with the stated intention of encircling the city and making it harder for international law requiring an Israeli withdrawal from it to be implemented.

The actions of the Tel Aviv embassy also undermine Britain's high-profile bid, showcased at the London conference "in support of the Palestinian Authority" on 1 March, to act as an honest broker in the peace process and a champion of Palestinian rights and independence.

A4e statement on working in Israel.