As the world day for laboratory animals march in Dover was effectively rendered pointless by the police and council in Dover leading to the march being postponed, animal activists from all over the Midlands decided to hold their own unadvertised 'Day of Action for the Animals'.

The Stop Sequani Animal Testing campaign, including activists from West Midlands Animal Action and Save the Newchurch Guinea pigs amongst others held a surprise demo at Sequani animal testing labs in Ledbury followed by Gateway to Hell campaign demos in Worcester. 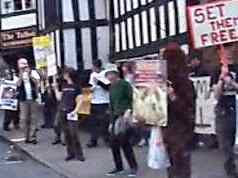