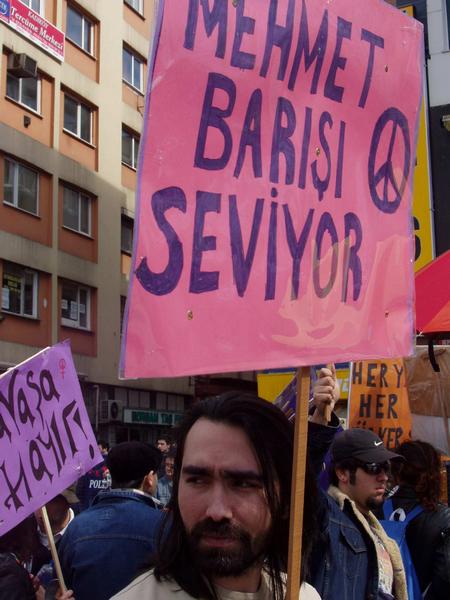 As reported in an earlier co-alert on 8 April (see

http://wri-irg.org/news/htdocs/20050408a.html), Mehmet Tarhan had been arrested on 8 April 2005 early in the morning. He was then brought to a military unit in Tokat, accompanied by military police. Because Mehmet Tarhan is refusing to co-operate in any way, he was then transferred to the military prison in Sivas. Mehmet Tarhan is a gay and anarchist activist. He declared his conscientious objection on 27 October 2001, and continued anti-war activities in public ever since, without going into hiding. Mehmet Tarhan is now being charged with Article 88 Turkish Military Penal Code (TACK), "Insubordination in front of the unit". This charge carries a penalty between 3 months and 5 years imprisonment. A first trial on 28 April 2005 was adjourned to 26 May, to call several soldiers from his unit as witnesses.

Meanwhile, Mehmet Tarhan is imprisoned in the Military Prison of Sivas, where he is facing death threats and abuse. Suna Coskun, Mehmet Tarhan's lawyer, reported on the abuse her client faces today. On arrival at the Military Prison in Sivas, staff sergeant Mustafa Selvi threatened Mehmet Tarhan with transfer to "Common Cell No 2", where the "wildest" prisoners are imprisoned. Later Mehmet Tarhan was ordered to enter "Common Cell No 1" on his own. The cell was dark, and the inmates (which Mehmet Tarhan could not see) ordered him to sit down on a chair next to the door. They started to ask questions. They wanted to know whether he was a terrorist or traiter, in which case they would kill him. Then the inmates started to beat Mehmet Tarhan, and insulted him because of his long hair. Prisoner Ertan Mertoglu showed his weapon to Mehmet Tarhan and threatened to kill him. This attacked was ended by other prisoners. Mehmet Tarhan was then transferred to the dormitory, where a few moments later the same prisoners attacked him again. The beat him everywhere and pulled on his hair. The attack turned into an act of lynching. After 20 minutes, other prisoners again stopped the attack. After the attack in Common Cell No 2, the light bulbs in the cell were tightened again, so that the normal light in the cells was made to work again. This indicates that the attack had been prepared. Later, the prisoners who beat Mehmet Tarhan came to him and told him that staff sergeant Mustafa Selvi had told them that he was a terrorist, and "you know how you have to deal with him". They said that this was the reason they beat him. Mehmet Tarhan was then transferred to a single cell, but during each time Mehmet Tarhan left the cell, the prisoners Ertan Mertoglu, Hakki Dincel, Ersoy Özbulduk, and Ercan Kizilboga threatened him. They told him: "We could have killed you on the first day if we wanted. But we still can do it." Mehmet Tarhan was fearing of his life, and therefore did not tell anyone. But then the prisoners demanded first money, and later clothes, and telephone cards. On 29 April, the prisoners Hakki Dincel, Ersoy Özbulduk, and Ertan Mertoglu demanded 500YTL (about 290EUROs) and added he would know what to expect, if he would not pay. Mehmet Tarhan answered that he is unable to pay such an amount. One week later he submitted to the threats and handed over 300YTL to Ercan Kizilboga and Ertan Mertoglu. Then, his extortioners demanded clothers. On 9 May 2005 they demanded three black suits. To guarantee that he would deliver, they forced him to call his sister and listened during the phone conversation. On 11 May 2005, Emine Tarhan brought two black suits, shoes, tyes, and shirts to the prison, which were handed over to Ertan Mertoglu by the prison authorities. Mehmet Tarhan's upper lip and the right side of his lower lip cracked as a result of these attacks. He is suffering ecchymosis at the chin, the neck, and other parts of his body. As a result of being beaten on his chest he suffered from breathing problems until 30 April. In the following days, he contiunously lost hair. Because of being beaten on his knee, legs, and feet he suffered from ecchymosis there, and for a long time had difficulties standing up.

War Resisters' International urgently calls for letters of protest to the Turkish authorities, and Turkish embassies, demanding from the Turkish government to ensure the safety of Mehmet Tarhan. Letters should be addressed to the Turkish President, Ahmet Necdet Sezer, email

cumhurbaskanligi@tccb.gov.tr. A protest email can be sent at