CIRCA in Time Out

This article about The Clandestine Insurgent Rebel Clown Army's tour of the country is from this week's Time Out magazine.

Their next stop is London (this weekend) then Birmingham, Sheffield, Manchester and Newcastle before heading up to Scotish cities, Aberdeen, Glasgow and finally Edinburgh. 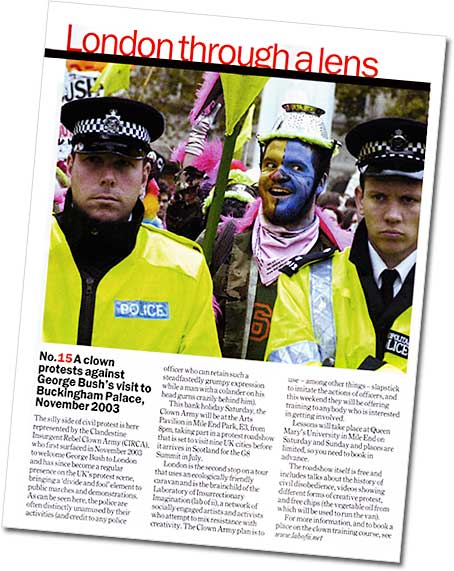 Article in this week's Time Out

No 15 A clown protests against George Bush's visit to Buckingham Palace, November 2003

The silly side of protest is here represented by the Clandestine Insurgent Rebel Clown Army (CIRCA), who first surfaced in November 2003 to welcome George Bush to London and has since become a regular presence on the UK's protest scene, bringing a 'divide and fool' element to public marches and demonstrations. As can be seen here, the police are often distinctly unamused by their activities (and credit to any police officer who can retain such a steadfastedly [sic] grumpy expression while a man with a colander on his head gurns crazily behind him).

This bank holiday Saturday the Clown Army will be at the Arts Pavilion in Mile End Park, E3, from 8pm, taking part in a protest roadshow that is set to visit nine UK cities before it arrives in Scotland for the G8 summit in July.

London is the second stop on a tour that uses an ecologically friendly caravan and is the brainchild of the Laboratory of Insurrectionary Imagination (lab of ii), a network of socially engaged artists and activists who attempt to mix resistance with creativity. The Clown Army plan is to use - among other things - slapstick to imitate the actions of officers, and this weekend they will be offering training to anybody who is interested in getting involved.

Lessons will take place at Queen Mary's University in Mile End on Saturday and Sunday and places are limited, so you need to book in advance.

The roadshow itself is free and includes talks about the history of civil disobedience, videos showing different forms of creative protest, and free chips (the vegetable oil from which will be used to run the van).

For more information, and to book a place on the clown training course, see

Full details of times and venues are at: