WHY CLOSE THE G8? (audio from the film)

This is the audio from a short film called "Why Close The G8?" made in advance of the G8 Summit protests in Scotland this july. It makes a great audio soundscape intro to some of the issues and lists some of the major protests planned. 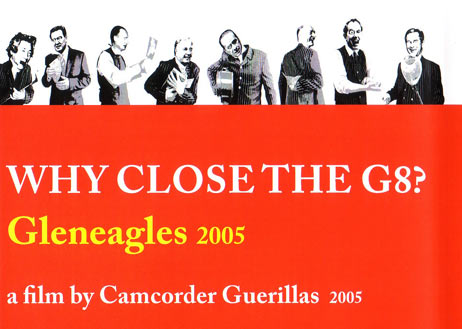 The film was made by the Camcorder Guerillas in Scotland and was released on May 1st 2005 - find out how to get hold of a copy of the film here:

There's an additional bit at the end where the more info website addresses for the main G8 mobilisations that appeared as subtitles at the end of the film are read out:

Why Close the G8?

In case you haven't heard - the G8 is coming to Scotland

This short film gives a brief history of the G8, and explores the issues that they will be discussing at Gleneagles. It goes on to give voice to people who are protesting and finishes off with how people can get involved and what they can do in their everyday life to resist the G8.

The film is a short, sharp and concise call to action. It is part talking head and part animation.

Why are the Camcorder Guerillas making this film?
In the summer of 2005 the leaders of the worlds 'most powerful economies' will be gathering in Gleneagles, Perthshire in Scotland. Hundreds of thousands of people are expected to descend on Scottish soil to protest against the G8 - and with good reason - but do the people of Scotland really know what the protests or the G8 are about. This film aims to inform people about the G8 and give voice to the people who are protesting against it.

The G8 has over the last quarter century emerged as the central forum for global governance, and until relatively recently they have managed to meet and plan in secrecy, making decisions and controlling the systems that affect all of life on earth. They are an unelected and unaccountable body of power and have a distinctive agenda which puts economic growth and in particular the interests of their own economies above all else.

Since the G8 came into being the gap between rich and poor has widened tenfold. Climate change threatens to wipe out life on earth as we know it within our lifetimes and the G8 are not addressing this issue. People are beginning to wake up to the G8's agenda and we at the Camcorder Guerillas are committed to putting across the issues that the mainstream media is choosing to distort or ignore.