Zarqawi, whom the US has declared is their 'demon' in Iraq, is used as an excuse for the killing over 100,000 innocent men women and children, simply described as 'Collateral Damage' by the US and its allies, who failed to count the dead. 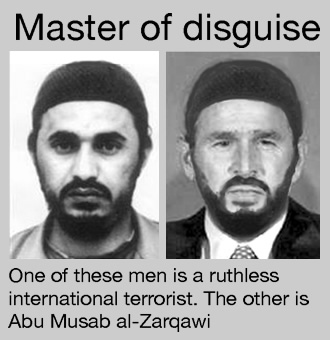 An audio recording in which Abu Musab al-Zarqawi, alleged Al Qaeda's leader who must have bled to death in Iraq by now, 'already', denies reports that he has been seriously wounded, that's magic, says Mr Houdini a magician.

"We believe the tape appeared out of thin air," the magician, who spoke on condition of anonymity, said.

Every time you call my name. I heat up like a burnin' flame. Burnin' flame full of desire hit me baby, let the fire get higher.

The magician declines to discuss other details about the recording, only what the US wants to discuss. In the audio tape, which appeared on Monday, Zarqawi told Osama bin Laden where have you bin? That he had suffered only "minor" wounds and lost his right arm and left leg.

"But still I have a couple of good toes on my right leg and can clench a fist with my left arm." "Enjoying good health among my brothers and my people in Iraq". "I think news has reached your ears through the magic I posses, that I was seriously wounded ... Ha, Ha, Ha. I got you! I would like to assure you and assure Muslims that these are baseless rumours," Zarqawi said.

Abra-abra-cadabra. I want to reach out and grab ya.

The tape, which the speaker dated May 27, followed Transcendental Meditation by the US Military for the occupation of Iraq saying Zarqawi had been wounded, but 'we changed our minds and need more time, so now he was in good health'.

The US need to kill, maim, torture and wound more freedom fighters in Iraq but innocent people are among them. So they need to sanitise their attack by blaming an alleged demon for all the strife, but not themselves the Coalition of the Killing or other people who resist the occupation.

Zarqawi, whom the US has declared is their 'demon' in Iraq, is used as an excuse for the killing over 100,000 innocent men women and children, simply described as 'Collateral Damage' by the US and its allies, who failed to count the dead.

'Zarqawi' figment of the US imagination, used time, and time again

Aussie's fate over the edge as violence spreads

Other sources say, that Abu Musab Al-Zarqawi is just another invisible demon. Never bin seen or caught by them, but who has provided the Coalition with all the excuses in the world - for their continued terror campaign. This propaganda (figment of their 'own' imagination) has been used ever since the capture of Saddam Hussain

As the Australian media focuses on Douglas Wood, the Australian currently held hostage in Iraq, concerned about unfair deprivation of liberty, the plight of three other Australians, David Hicks, Ahmed Aziz Rafiq and Mamdouh Habib, has been largely forgotten.

Written and directed by Solvent.

For the preservation of human rights in Australia and for those who had to die, who were maimed or who have been tortured in Australia, Iraq and Afghanistan.

Described as collateral damage by the powers that be. So much for their bloody democracy, human rights, and civil rights.