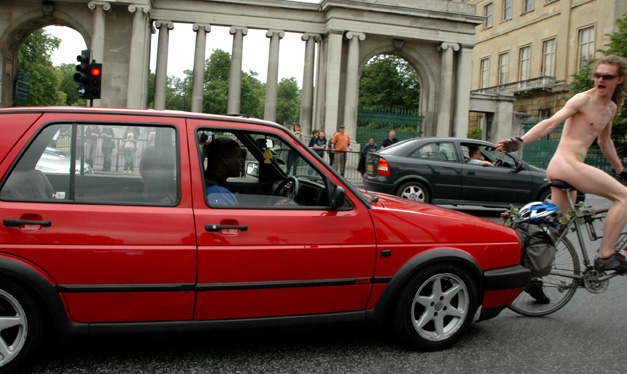 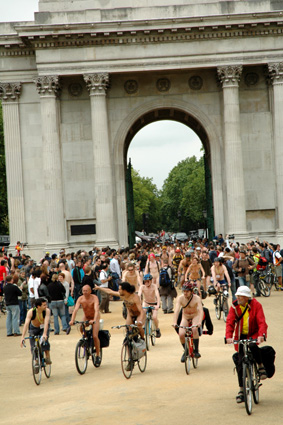 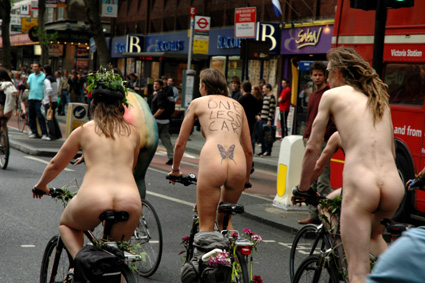 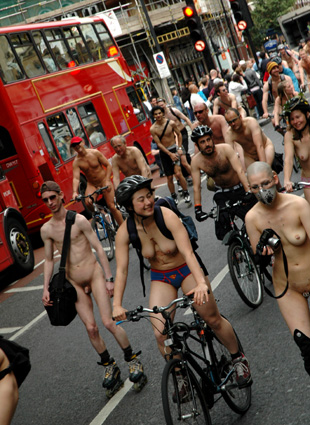 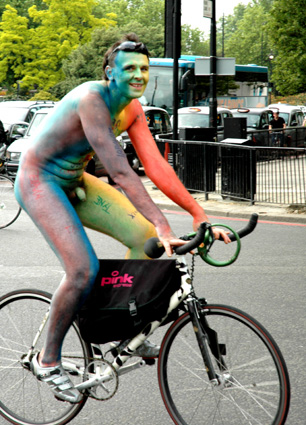 250 naked and half-naked cyclists and skaters joined a mobile protest through London. The second World Naked Bike Ride certainly lived up to its name, despite the cloudy weather and temperatures of just 18 degrees. Almost all the protesters cycled the 10km route through the congested city completely naked, to the bemusement of pedestrians and tourists.

The mixed group of environmentalists, naturists and exhibitionists were protesting against the world’s dependence on oil and “celebrating the power and individuality of their bodies”. Jesse, one of the organisers was pleased with the turnout, “The group is more diverse than last year. This is the only time I ride in London normally it’s too dangerous.” He has a point, last year 216 people died on the capital’s roads.

In contrast to last year’s event, no police on bicycles accompanied the riders. This meant the cyclists took their own traffic control measures – halting traffic at Hyde Park Corner to let the main body of riders on to the road. One taxi driver and two motorists aggressively tried to push past the human barrier, hooting horns and shouting abuse.
Regan, a cyclist in charge of stopping the traffic said “It could have been better to have a police escort next time.”

The ages ranged from 20-40, and men outnumbered women. However all seemed to enjoy themselves. “It was fantastic. And I thought it would be colder” said Andre, who runs a bike courier business in London.
“It was really fun and exciting” said one cyclist wearing just a helmet and sunglasses, “there were some riders who weren’t naked and who took off all their clothes as the ride progressed.” A trio of naked rollerbladers said "It's better on skates, you can weave in and out of the traffic, and there were a lot of irate taxi-drivers around."

When the riders in the raw rolled down Charing Cross Road the mood was carnival-like. Pedestrians giggled at the sight and promptly reached for their mobile phones and camera. However most onlookers had no idea what the protest was as in aid of.

“I saw the naked riders, but I’ve got no idea what they are protesting about” said a tourist from Sweden at Piccadilly Circus. “Is about the freedom to ride naked?” asked an Australian couple. “It was lovely, and funny. I’m not offended at all!” said a mother with her young teenage daughter, “what’s it all about? Apart from impatient taxi drivers, only 2 people were offended by the naked riders. A Muslim man and his wife said “Shameful, just shameful” when asked for their views.

The preparation
London’s first WNBR in 2004 attracted around 52 cyclists and was restricted to Hyde Park. This time the route was 10 km, starting at Wellington Arch, passing Trafalgar Square, the Houses of Parliament and the American Embassy. The London ride was part of London Sustainability Weeks 2005, and National Bike Week 2005.

Initially Westminster Council would not allow the riders to assemble at Wellington Arch, but help came from an unexpected source.

“The council completely refused at first, but it was the Metropolitan Police who persuaded them to allow the event to assemble in Wellington Arch area. For me, that's a first. The Police persuading the authorities to allow a protest” said Jesse, a co-ordinator for the event.

The London based activists organised and publicised the event with a tiny budget of £90.
Most members of the press and public ignored the organiser’s photography policy. This barred people from photographing riders before or after the ride, and banned close-up photographs without the riders written permission. Before the ride began, the protesters were almost outnumbered by tourists, pedestrians and a handful of reporters brandishing cameras.


More information on other WNBR events round the world, and how it all started visit