The event MOVING FORWARD TOGETHER 'staying focused - keeping up the struggle' was led by the Mikey Powell Campaign for Justice and supported by Migrant Media, the filmmakers that made the INJUSTICE film.

The event bought together a number of families and artists including the world renowned poet Benjamin Zephaniah, (who famously refused the OBE), in Birmingham on 27th May 2005 to help launch a major new campaign, and to shine a spotlight on the cases of many other families affected by deaths in police and institutional custody. 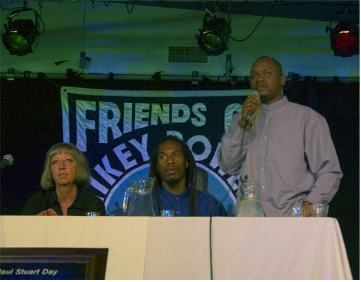 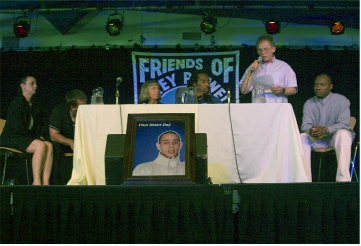 Families speak out together 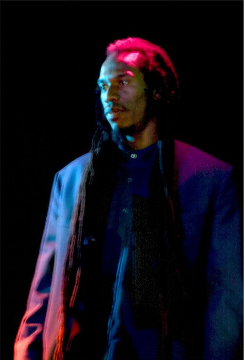 The evening attended by more than 250 people, took place on 27th May at the Drum Arts Centre, to provide a platform for several family campaigns and social justice organisations including the Mikey Powell family and the families of Michael Bailey who died recently in Rye Hill Prison, Sarah Campbell who died in Styal Prison, Paul Day who took his life in Frankland Prison, and Ron & Violet Brayson who now care for a severely disabled son, Robert, as a result of a prison incident, and lost two other children who were severely traumatized by what had happened to Robert.

The event included a screening of the controversial award winning documentary INJUSTICE charting the experiences of families affected by custody deaths, currently banned from UK television. The filmmaker, Ken Fero, and Brenda Weinberg, sister of Brian Douglas who died from a baton blow to the head, were also present to take questions on the film and the work of the United Families & Friends Campaign.

The event also highlighted plans to form the West Midlands Families Support Network, a new initiative to support and unite families who have lost loved ones in police custody, prisons and mental health institutions across the West Midlands.

Speakers, Gilly Mundy and Michael Wongsam, from national campaigning Charities INQUEST and the National Assembly Against Racism respectively, highlighted the dramatic increase of deaths in custody over recent years as well as the continuing failure of the State to successfully prosecute those responsible. Representatives from local agencies also spoke including Bini Brown from the Africa-Caribbean Self Help Organisation and Maxi Hayles from Birmingham Racial Attacks Monitoring Unit.

A number of performing artists from Coventry, Birmingham and London gave their time to attend and perform at the event and included Hillz Yungsterz , Ameachine, Yaz Alexander and Princess Emmanuelle. Benjamin Zephaniah also performed his hard hitting yet humorous poem, 'The Rong Radio Station'.


Claris Powell: Mother of Mikey Powell who died in police custody in Birmingham in September 2003 said, "I Just want justice to be done for Mikey sooner rather than later. I'm disgusted that this is taking so long."

Tippa Naphtali: Chair of the Mikey Powell Campaign for Justice said, "Only by joining forces in a collaborative and sustained manner can we weaken the systems that seem to foster and protect those that take our loved ones"

Sieta Lambrias: sister of Mikey said, "Mikey was a young and healthy man. He was taken away by the police ands was dead soon after. Why did this happen? It's distressing to know that despite him being healthy the experts cannot even agree a cause of death which is a nightmare for us.”

Pauline and Andy Day: the parents of 31year old Paul Day who died in Frankland Prison in October 2002 said, “My husband and I have studied at great length all the evidence prior to Paul's inquest but nothing could have prepared us for the damming evidence that the jury heard during those five weeks. The evidence proved the horrific way he was treated before his death. We are going to fight on until we get the justice that he deserved."

Caroline Bailey: Mother of 23 year old Michael Bailey who died in Rye Hill Prison said beforehand, "I want to know what happened to my son. The system has let us down. We are praying for Michael as well as all the others that are still in prison fearing for their lives. My son is dead, they have started something and we are not going to stop."

Pauline Campbell: Mother of Sarah Campbell who died in HMP Styal aged 18 said, ”Ever since my daughter's death I have been searching for justice for Sarah. This government has failed both Sarah and myself. I am now considering legal action against the Home Office under the Human Rights act”.

Ron Brayson: spoke of the anguish and suffering bought on his wife Violet and their family following events in prison which left their son, Robert, in a permanent vegetative state. The distress also drove two more of their children to commit suicide. The crowd was visibly moved by this heartrending account.

Dr Benjamin Zephaniah: poet and performer said, "My personal is political. Mikey Powell was my cousin, but the system of justice we have now tells us that whatever happened to Mikey, (whatever that is), can happen to anyone. I want this event to update people on the state of our struggle, and remind them that they too must be on guard."

Tariq Mehmood: novelist and playwright said, "The Police Federation are effectively trying to ban The Injustice [Film]. For the past four years, with the support of many, we have stood up to them. As journalists we condemn this attack on our work to expose fundamental human rights abuses in this society. We urge everyone concerned to demand that broadcaster show this film in the public interest."

The event was a major success and the Mikey Powell Campaign are organising further events later this year to mark the second anniversary of Mikey’s death, the death of David Oluwale (first recorded Black death in custody – 1969), and follow-up gatherings for the West Midlands Families Support Network.

Further news will be posted on the campaign’s website in due course.

phunkee posting a report by the Mikey Powell Campaign for Justice