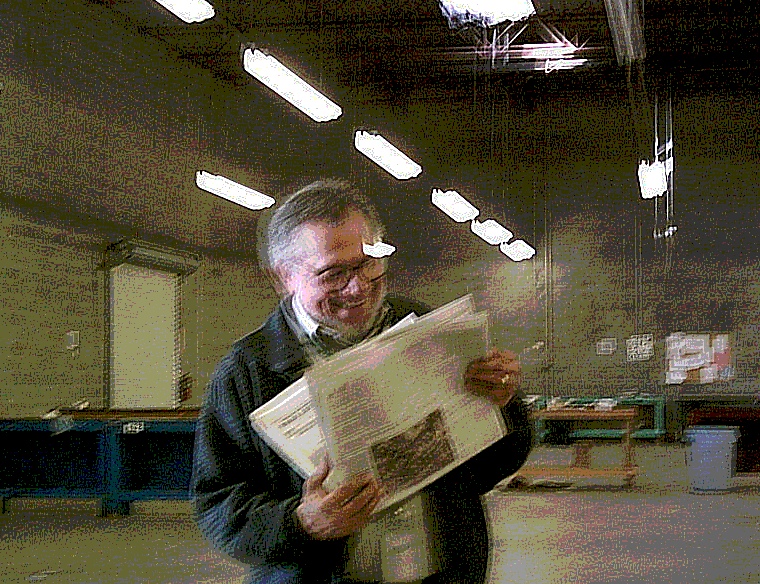 Why is he laughing?

What is this man laughing about? Luis Alvarez, manager of
the Roswell, GA, USA Atlanta Journal Constitution warehouse,
has been laughing non-stop since March 11, 2005. The people
that work for him have no idea just what Luis finds so funny.
Perhaps Luis would tell us what is so funny, but so far
he has been unable to offer up any answers. Luis Alvarez lost
control around March 11th, the day a crazed gunman went on
a rampage downtown.
Luis has an easy job. In fact, many are unsure exactly what
it is he does there. The purposes one would assume he would be
there for, if done, are done by other people. He sure isn't
keeping an accurate count of papers delivered and returned,
or handling customer service calls. Fact is, besides reading
the newspaper, Luis doesn't do much but try to go home by noon.
Uncontrollable fits of laughter are still a mystery to science.
What causes them, what sustains them, how to cure the condition
are all questions the scientific community is still working on.
Luis Alvarez has been unable to sleep or concentrate at work.
He has become delusional and paranoid, claiming someone is 'out
to get him' and calls for protection from the security staff. The
endless laughing make him hard to take seriously.
Some psychologists who have studied the case think the laughing is
a reaction to deep-seated guilt over his five year history of poor
sales performance. Despite having a monopoly over the market, in the
richest, most affluent community in Georgia, Luis has managed only
a steady decline in sales and morale among his employees.
There is a reason the warehouse workers make copies of their
time sheets. There is a reason some employees get two paychecks.
There is a reason certain people get picked to be route managers.
If you want to know what is REALLY happening, you have to ask
the right questions. The newspaper is home to multiple layers of
deception. Their real motives and loyalties might one day come
to light, but you won't read about it in the mainstream press.
Once again, it takes IndyMedia to give TRUTH half a chance.
The moral of this story:
Someone once said: What goes around comes around.
Work like you don't need the money.
Love like you've never been hurt.
Dance like nobody's watching.
Sing like nobody's listening.
Live like it's Heaven on Earth.

The Atlanta Journal Constitution claims lots of things. It's
actions, and the timing of those actions, betray their true
motivations and values. They should be more careful what they
print in their paper. Keep an eye on IndyMedia AJC, the day
of your reckoning is close at hand. Some whistle blowers can't
be bought off. When I am done, you'll need a new hotline!