Stop the Pillage of Iraqi Oil!

The Corporate Pirates are calling a protest outside ‘Iraqi Petroleum Conference 2005’ 29th June, The Hilton, Paddington. Meet 10.30am, Edgeware Road tube. After their successful week of action against Windrush Communications in April, the pirates have turned their attention to the carve-up of Iraq's oil resources. And this time the Pirates will have two spectacular pirate galleons ready to do battle... 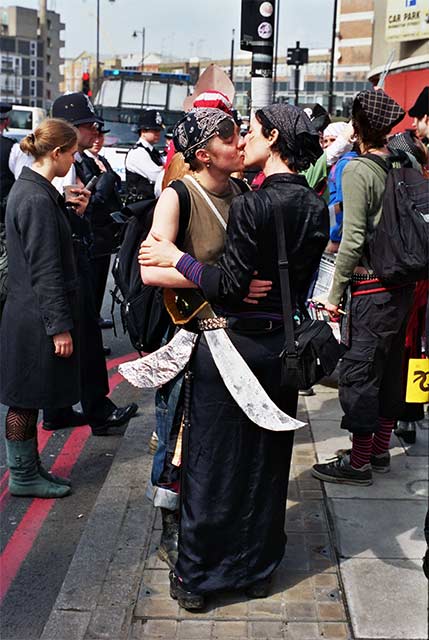 Miles from Gleneagles and further from Baghdad, multinational oil executives, economists and Iraqi government officials are gathering with oil experts in the luxurious Hilton Paddington to divide the Spoils of War. Long before the war started, millions protested that America only lobbies for wars in oil-strategic countries, and then plunders the black booty. And now, while Iraqis have been starving and suffering, caught in a constant cycle of violence, the US and UK governments, BP, Exxon Mobil and Shell have made plans for the theft of their most valuable resource- oil. The people gathered in the conference here are lobbying for the loans and debts, estimating the profits and sacrifices, and dividing up the treasure chest, to decide who will benefit most from Iraq's oil reserves and it won't be the Iraqis.

'GIVE US YOUR FUCKING MONEY!'

While Gordon Brown wipes debt on the condition that 'alleviated' countries privatise more, the debts and reparations owed by Saddam Hussein are to be used to lever all 'liberated' Iraqi governments into privatising industry. Rather than liberating Iraq from Saddam's despotic regime, it is being kept in bondage by his past corruption to suit the corporations lusting over its profitable resources. After tenderising the country with sanctions and peppering it with bullets, Iraqi national industry was almost brought to its knees. Now the same people who called for this razing of a country's industry, will be offering them loans to restore it- on the condition that the industries are then sold-off. This is piracy cum racketeering. Last month, Iraq's General Union of Oil Employees demanded public control of their assets, and investment in damaged oil fields without forfeiting future profits. This is the least the Iraqi people deserve, after losing their lives for other people's oil wealth over the last two decades- be it Saddam or G W Bush. Not one representative of the GUOE is in that conference today, deciding the future of their working lives, and of the oil fields they work on to provide for their families. Join the General Union of Oil Employees in Iraq's call for:
OIL PROFITS MADE IN IRAQ, REMAIN IN IRAQ.
NO PRIVATISATION OF OIL
NO MORE PIRATE-STYLE ASSET STRIPPING
Click here for more info.