Unless Australians are satisfied with the cost of the policy and the devalued reputation that has blemished our human rights record, including locking up children and even our own citizenry in detention, then some people might say that it really didn't work at all. 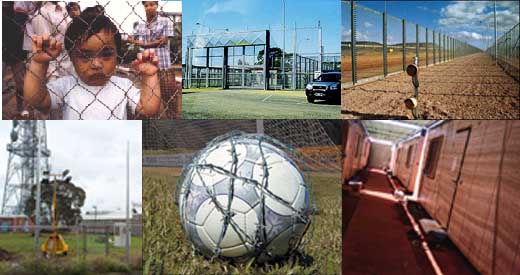 But at what cost?

Starting at the ocean
Watching the water flow
I can't stop the ocean
Never, no

AUSTRALIA: THE long and agonising refugee policy retreat has begun, but Australia has been damage irreparably over the politics and morality of asylum-seeker policy and no resolution of this conflict is in sight.

john hoWARd's message since Friday's compromise is unmistakable. He opened his media conference by saying the policy "remains completely intact". hoWARd has surrendered none of the principles that define his 2001 asylum-seeker crackdown dramatised by the Tampa.

"People who come here in an unauthorised fashion must expect a period of detention." "Our position has not changed and it won't change," he said.

As if a refugee has time to organise after running away from possible mayhem, in a crisis situation or from extreme danger.

He defended each element of the 2001 repressive apparatus - offshore processing, excision of islands from the migration zone, turning back the boats and mandatory detention.

But I'd like to know where he got the notion?

HoWARd's policy still assumes that asylum-seekers should be in detention, not free in the community while their claims are processed; it still assumes that unauthorised boat arrivals, even when found to be refugees, should only be entitled initially to temporary, not permanent residence. The concessions hoWARd offered the moderates are substantially less than 'human rights standards' and it's alleged by the Un-Australian today, by non other than Paul Kelly, that Petro Georgiou, Judi Moylan and their colleagues had a significant success; at least that's what they want you to believe? I wonder what their standards were? Goes without saying! Anyway, hoWARd tailored his concessions so he can argue with credibility that the framework of his asylum-seeker policy remains in place even if eroded at its edges according to Paul Kelly.

At the same time hoWARd makes another argument - that his punitive post-Tampa policies have worked to deter the boats, smugglers and asylum-seekers. But howard's view has 'distraction' with the public because he says people can like or dislike his policies but there is no dispute 'that they have worked'.

But at what cost?

Unless Australians are satisfied with the cost of the policy and the devalued reputation that has blemished our human rights record, including locking up children and even our own citizenry in detention then some people might say that it really didn't work at all.

What it did do, no doubt, is to play on the emotions of all the uneducated that haven't dealt with the racist monkey on their backs. And of course some people that are too busy just getting on trying to survive don't spend much time politicking because they're looking after their family's interests, but they still vote because it's compulsory. And how do we know how much the policies cost in total? So the only thing that it was alleged to have stopped was people seeking asylum.

His critics misjudge the power of his dictatorial prowess. hoWARd justifies his policy by its political results and its utility, but not its morality or cost.

But he will never entrench in history the view that the Tampa policies succeeded or even the illegal and degrading wars on Afghanistan or Iraq. Because when it all pans out and adds up, people will be more wary next time. These policies are abhorrent and should never become the template to be reactivated when the boats reappear again or when lies about alleged WMD's surface as they surely will sometime down the track.

Especially if HoWARd's off pre-emptively attacking sovereign nations like Afghanistan and Iraq where some of the boat people came from.

All the stars keep turning, Wheeling all night long, I wish you'd turn, And hear my song.

This raises the core issue: has the rest of Australia begun to reject the hoWARd framework? Yes! At the cost of Australia's human rights obligations. Has it decided that his 2001 policies were a moral travesty? Yes! Especially when Australia is locking up families and children for years on end. Does it want to scrap mandatory detention? Yes! It does want to scrap indefinite mandatory detention. Why? Because we all live on this Island called the world and we are all equal. So why the indefinite detention and solitary confinement for some, when people simply want a place to go...somewhere they're safe... and where there is no clear and present danger. That's fair!

It would not be wrong to answer in the affirmative. Another reason is that our political system is adjusting to the highly publicised breaches of human rights via individual cases such as Peter Qasim, Cornelia Rau and Vivian Alvarez Solon. Policy has adapted to a new situation -- yet the underlying schism remains. This conflict over refugees will never move into remission by the hardliners and the takers. But when another war or election is due it could erupt again, unless in the interim, Australia achieves a new refugee consensus.

Two global trends are on display -- nations are being forced to accept more asylum-seekers because global corporations and illegal and degrading wars are pushing them out of their natural habitat, yet those doing the pushing are simultaneously erecting more obstacles to keep these asylum-seekers out. Nations formally adhere to the 1951 refugee convention yet they take urgent domestic measures to limit its application. This contradiction has been branded "organised hypocrisy".

The convention was written during the Cold War when refugees were valued political assets for different reasons and that age is gone forever. But they are still political assets, pawns of no value and used for political posturing. And so long as they're kept in detention and accused of que jumping or the possibility of being a terrorists (in the 'war on terror'), which is a ('War on Human Rights), then they can be used for Imperialist bait by the global corporate takers of this world. That's not fair!

It is likely that if put to a referendum in Australia just like the Federal election, that Australia would not endorse this convention or anyone but john hoWARd because we don't live in a democracy. You don't have to talk us into that proposition Mr Kelly!

But if the corporate media mongrels got on the right side of human rights it wouldn't take long to endorse this convention based on human rights and dignity instead of greed and fear. Like the fear of losing one's mortgage, because of higher interest rates .

The only question would be that if it were in the globalised corporate interest or not? Then it would have no hope because the corporate media can easily convince a large majority of the population that there is a danger especially racist ones!

So the corporate media wind up the emotions of all the people they've previously put the fear into. Those people who are 'alert and alarmed' worried that their sovereignty and national interests are at stake are just going along for the ride, just in case.

This brings us to the heart of the issue -- looking at individual cases this is a contest between tolerance and intolerance, between compassion and lack of compassion, between being in detention and not being in detention, between living in fear and not living in fear, between affording a mortgage and not affording a mortgage. But in political terms it is an ideological struggle between the rights of central governments, common law for the people by the people, the rights of political leaders to maintain their grip on public office, the rights of the citizens, and the refugee or asylum-seekers rights under international law. This is the coming century's epic battle.

hoWARd's policies rest on the right of the neo-liberal undemocratic central government - to control and protect its borders and takerism - while simultaneously attacking sovereign nation states. In short, that in democracies the people would normally have the right to decide who becomes one of them and their nation. The reality is that the HoWARd neo-liberal government have exercised their own rights according to their own standards ever since they came to power, even when the Australian public expected its governments to exercise restraint and uphold human rights standards and values. It goes to the essence of being a true democracy.

For instance the vision, as espoused by the refugee, legal and human rights lobby, is based on full application of the 1951 convention without detention, without temporary visas and without any Pacific solution.

Maybe when you're sleeping, I can make a spell, And when you wake up, I won't tell.

This rests on the concept of universal human rights and standards opposed to the illegal and immoral corporate obligations of the neo-liberal US/Aus central government both here and abroad, in a world of people movements, to accept that humanitarianism must qualify the nation's guardianship of its borders.

These are directly competing philosophies that underpin the refugee debate. The rights of global corporations and politicians to hold on to power (using their corporate media allies) in direct contravention of international law. Or to accept the international community's human rights and standards as set out by the UNHCR.

But they constitute a trap for the corporations and power freaks. Far-reaching refugee policy reform in Australia will only be a result from being shamed by internationalist and nationalist peace movements - defeating the global corporation in a debate over morality. That must happen as it's happening now for the sake of the free world.

The key to reform lies in showing that an alternative asylum policy is best in moral terms. That won't be easy, but given the costs and ineptitude of hoWARd's policy it is far from impossible.

In his book, The Ethics and Politics of Asylum, Oxford University's Matthew Gibney says: "Australia is remarkable because so few asylum-seekers were needed to provoke a 'crisis'. Whereas the US, Germany and the UK have faced tens of thousands of applicants or more on an annual basis, Australia has at most faced a few thousand."

This puts Australia's problems into context -- our natural advantages in controlling our borders should create a margin of tolerance for policy reform. The absolute need, however, is to terminate asylum policy as a weapon of domestic political attack.

There is hope when persons are treated with dignity and respect under the rule of law regardless of history and politics".

Paul Kelly and Just Us