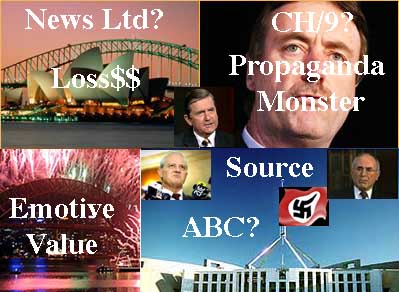 AUSTRALIA/CUBA: Government and corporate propaganda agencies 'believe' they have foiled an attack on the Melbourne Stock Exchange by a radical Islamic network linked to a covert group, which has carried out surveillance on key Sydney sites.

Here we go again! Excuse me but what is a belief? Opposed to real evidence! How can a bunch of propaganda professionals purport danger without showing the facts?

In short why should the community feel less safe because of a deluded belief by government officials and corporate media giants?

Don't show us glossy pictures of landmarks and celebrations 'long gone' in an attempt to show some reason to fear an emotive or valuable loss.

This is out of control and the clowns should put up or shut up!

From the news wire:

Please! The article is right to point and I just heard that nothing was found and no charges were laid. Accept for the bugs that were laid of course. You might refer to them as depth charges! Another term might be live bait!
This is the story about the fishing expedition and the one that got away, today. But with live bait you get a better chance to catch a fish - every fisherman knows that.

1) The idea is to find something on the premises that they can get their hooks into.

2) Then after the live bait they've planted today, goes off, and they pick up some circumstantial evidence to go along with the fishing expedition. Then they can manipulate and twist that information out of context to enable them to form a view based on the flimsy rules in anti-terror act.

3) Once the hook is swallowed then they can lay suspected terrorist charges down the track.......

4) Then ASIO will go down the fish shop and buy a large barramundi and tell everyone they caught one on the line! With live bait....

5) Shortly thereafter the arrest by ASIO, about one minute later ...New Ltd will hit us again with a 'he said she said' allegation because sources say that there are links and cells and or pictures of bare blurters.

The lucky country? Lucky if you don't get set-up for Howard's political aspirations!

The Daily Terror 'has been told' Islamic extremists with cells in Melbourne and Sydney carried out reconnaissance missions on the Harbour Bridge and two Sydney oil refineries.

Yeah if it's true it's called sight seeing you're allowed to do that in Australia!

While details of the planned Stock Exchange attack are being kept secret?

In other words they are not going to prove what they say they're just going to ask you to believe what they themselves believe? Well I'm terribly sorry I'd have to run that past my therapist before I take that belief on board let alone guide my life on it.

What they are really saying is Trust john hoWARd, phillip ruddock, chris ellison and mick keelty? I don't know about you but I wouldn't trust them with my left sock.

The Terror: "intelligence officials, the revelation comes as ASIO officers - assisted by Victorian and Federal Police - raided at least eight properties in Victoria and NSW this week.

They searched homes, seized documents and other material and questioned 'suspected' cell members.

The links apparently occurred 18 months ago?

The Terror: "Members of Victoria's joint counter-terrorism group established links between the 'Melbourne and Sydney extremists' about 18 months ago. They have had at least a dozen members under physical and electronic surveillance since then.

GKCNN: Now they have just become extremists? Show us what you mean? What did they do that wasn't normal? Were these people supposed to stand still in one place and not live in the Australian community? Even though they are here?

The Terror: "Sources said a senior member of the cell is an associate of jailed Australian terrorist Saleh Jamal."

The Terror: " Jamal, 29, fled Australia after the 1998 drive-by shooting of Lakemba police station. He was convicted this year in a 'Lebanese military court' of possessing weapons, forging an Australian passport, and planning acts that endangered security.

GKCNN: Now we are to believe the results of a Lebanese military court? Sure that backs up their story like dictator on heat?

Two Australians are reportedly due to face a military court in Lebanon charged with offences, which include raising money in Australia for terrorism in the Middle East.

So who's who at Nine? When did the Nine networks take over national and international public prosecutions? Or do they just believe anyone?

The Terror: "An intelligence source told The Daily Telegraph: "The Australian group has talked about following Jamal's lead and doing the same thing here."

GKCNN: Did they mean mick keelty is intelligent? So once again who is the alleged intelligent source? John hoWARd said?, phillip ruddock said?, chris ellison said, mick keelty said? And once again people were talking? What are people supposed to do in life not talk?

The Terror:"Melbourne cell members were heard discussing where they might find an explosives expert."

GKCNN:Perhaps they wanted to blow up news ltd? But once again there is no substance to the belief.

The Terror: "Victoria Police started watching the Melbourne cell about 18 months ago after a tip-off that an Islamic extremist was recruiting followers at a mosque in inner suburban Melbourne."

GKCNN: Police watch everyone that is their job and just because someone contacts police to tell them something, they believe, doesn't necessarily lead to a conviction especially without any proof. Another questionable policy is to wind up the population into a panic or a fear and then get them all to contact the 'be alert not alarmed line' with their fears?

The Terror: "Victoria's joint counter terrorism group - consisting of Victoria Police, AFP and ASIO officers - then took over the operation and worked closely with its NSW counterpart."

GKCNN: Does that mean we have to increase their funding?

The Terror: "Melbourne and Sydney cell members have been observed meeting regularly and attending training camps in Victoria and NSW, where some weapons training took place."

GKCNN: What and they didn't arrest them? Then take us to the place where they were alleged to have trained. Show us the weapons training that took place?

The Terror: "The counter-terrorism group has been unable to charge cell members so far because there has been more talk than action.

"They are like mercenaries looking for a war," the intelligence source said. "There has been plenty of talk about their motivation to commit a terrorist act, but no specific intent."

GKCNN: But there has been a specific intent it's called the 'politics of fear mongering' and these people should all be charged with 'falsley and misleadingly alarming and affronting the community at large'.

The Terror: "Surveillance officers are understood to have paid close attention to a group using small boats to check out sensitive sites on Sydney Harbour but have found insufficient evidence to warrant charges.

GKCNN: If the surveillance officers can go fishing so can the community!

The Terror: "ASIO and other law enforcement agencies have being using disruptive techniques in Sydney and Melbourne to try to warn off extremists."

GKCNN: Disruptive techniques? Terrorising the whole community? For an alleged belief? This is alarm and affront and zero tolerance! And they are right this is some of the most disruptive nonsense Australia has ever had to put up with in its living history purported by people who are supposed to be responsible who have mismanaged the community's resources.

New Ltd should lose its licence immediately and those in public office should be made accountable.

The Terror: "A decision was made that, after 18 months of surveillance without getting enough to lay charges, alerting the cells that authorities were on to them made sense. Prime Minister John Howard, Justice Minister Chris Ellison and AFP Commissioner Mick Keelty have been briefed about the raids."

GKCNN: Now they have turned it upside down it should read' john hoWARd, injustice minister chris ellison, and AFP loser of the century mick keelty have informed news ltd and ch/9 who have been briefed about the raids to brief the community at large.

The Terror: "Mr Howard said ASIO and the AFP had his full support for the professional way the raids were carried out.

GKCNN: But it was hoWARd that prompted the raids?

"Furthermore, nothing is reasonable about a raid on people's homes because for an alleged possibility. For those sorts of enquiries one should approach a 'soothsayer' and if you get the all clear only then should they approach people via the front door with the appropriate warrant to search one's home. A warrant based on concrete evidence that has been filtered by a judge or magistrate of the court to see whether the material is frivolous or vexatious."