Borders at the G8 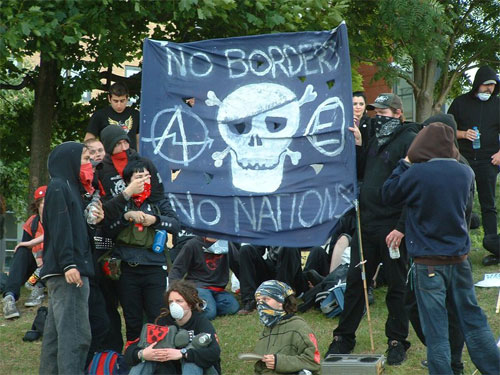 One thing that won't be on the agenda the G8 is asylum and immigration: "Governments' right to encourage the movement of people considered to be beneficial for economic growth and international relations and to delegitimise unwanted populations remains unquestioned in this arena." However it will be very much on the agenda at the G8 Alternatives Summit as activists defend the rights of these "unwanted populations".

According to the World Refugee Survey 2004 there are 12 million refugees across the world. More than 7 million of these have been deprived of basic rights guaranteed by the United Nations for more than a decade. And this does not count those "unwanted populations" whose applications for asylum are rejected. Very often the first human right that these groups will be deprived of is their freedom.

The Immigration Act of 1971 gave the UK government the power to lock up "the unwanted" in detention centres. These are for asylum-seekers whose applications are being processed or have already been rejected. Detention centres are used across Europe, including in the G8 countries of France, Italy and Germany.

In the US, immigrant communities have come under attack as part of the US "War on Terror". In the aftermath of the 11 September 2001, arabs, muslims and South Asians have suffered massive harassment from the US authorities.

Immigration has become a particular issue in Europe: As the EU has expanded governments have acted to restrict immigrants' rights to welfare. Governments have used talk of incoming hordes to roll back the rights of immigrants ever further.

However this system of borders and immigration control is under attack: many people have joined the campaign to say "NO TO BORDERS!" altogether.

Borders don't just run between countries. Within our own communities we are divided by a system which judges a person by their colour rather than their character. However this system is being vigorously opposed with anti-racist campaigns active throughout the country.

The campaign against the BNP has been a particular focus of the /a>Anti-Nazi League. Elsewhere, Unite Against Facism are behind the Love Music, Hate Racism Campaign. And then there's the anti-racist footballers. However perhaps most importantly local groups are taking action against racism wherever they find it: in Swansea, Glasgow, Cambridge, the list goes on.

Amongst all of these campaigns it is worth mentioning one in particular: In recent months travellers have been particularly targetted by the nation's media and by many local councils. In the standard racist pattern, they are first stereotyped, then ridiculed and finally become victims of villification and abuse. A Traveller Support Network has been set up to allow people to support travellers in their struggle to maintain their way of life.