Would you like some salmonella or E.coli with your bag of green leaves sir? 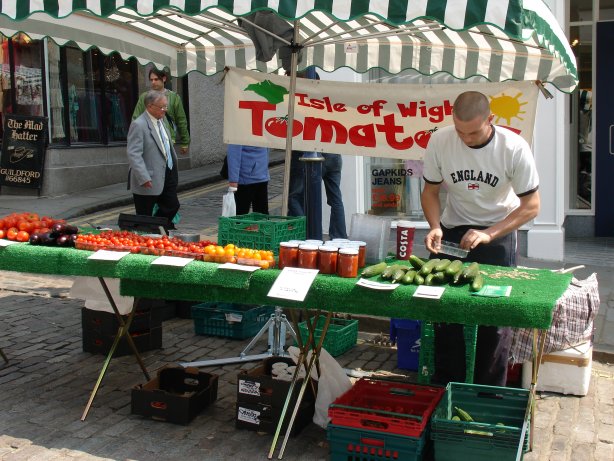 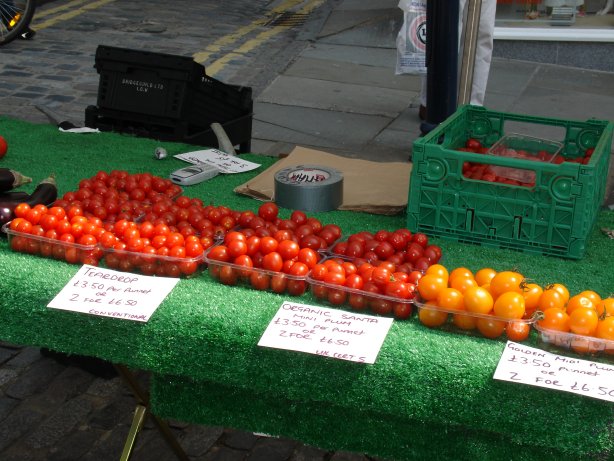 ... a wide variety of tomatoes 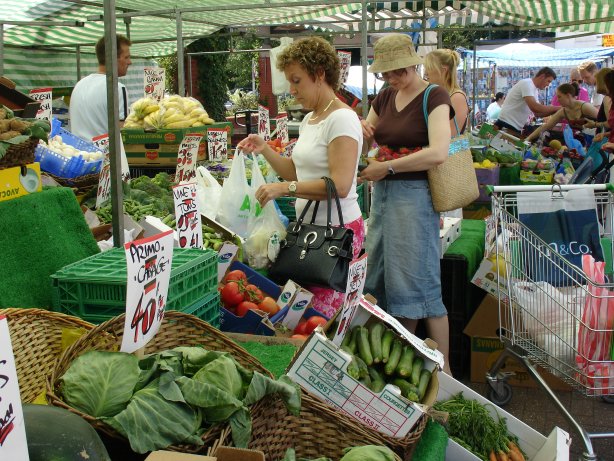 'More and more people from Britain go to the continent and are fed up with the paucity of choice when they come back. Even the smaller French supermarkets have a stack of different lettuces and leaf varieties. But when you come back to England you get the workhorse of iceberg lettuces, or the horrible packs of chlorinated leaves which go off as soon as you open them and have no taste.' -- Linda Johnson-Lee, The Campaign for Real Lettuce

'The paradox is that our fresh food is not cheap anymore. By the time it has been packaged and transported, and the retailers have added their margins, it is very expensive. Ninety-nine pence for a few leaves is a lot of money. But 99p for an unlimited supply of servants to wash and pick over it all, hidden not as in the old days below stairs, but in remote caravans or underneath plastic hothouses – that is cheap.' -- Felicity Lawrence

'Before supermarkets arrived we were self-sufficient in vegetables here in the UK. The supermarkets have destroyed British horticulture.' -- Charles Secrett, Secretts Farm

'There are now two trades in fruit and vegetables in the UK. There's supermarkets, where so much is indelible, unripe, all about shipping quality not flavour, and then there's wholesale markets supplying greengrocers and restaurants where you can still get great stuff.' -- Charlie Hicks, New Covent Garden

At first glance, 99p does not seem much of a bargain for a bag of less than a dozen green leaves. But maybe you get more of a bargain than you bargained for.

Well okay, they have washed it for you, but did you really want salmonella, listeria and E.coli thrown in, a good dosage of pesticide, and washed in a chlorine solution 20 times more concentrated than the local swimming pool, ie mild bleach?

The leaves will be several days old, deficient in vitamins and micro-nutrients, packed in a modified atmosphere to keep the leaves 'fresh', or at least looking fresh.

And it is not only green leaves. Green beans, shipped in from Kenya, all neatly chopped to size. Have we become so incapable that we are unable to chop green beans? Look carefully at the chopped ends of the beans and you will see they are going off well before their sell-by date.

Washed and ready-to-eat salad leaves deteriorate just as quickly as a lettuce on the shelf, the only difference is that in a modified atmosphere they retain the appearance of freshness.

When you open the bag the leaves go limp remarkably quickly, far quicker than a fresh lettuce off a local market or farmers market.

The labour used to wash the leaves will probably have been illegal migrant labour, hosting a range of diseases and paid well below the minimum wage.

The migrants live in appalling insanitary conditions. Hence they suffer from ill-health.

Everyone knows that illegal migrant labour is used. The supermarkets know, the farmers know, the packers and processors know, the local authorities in whose area they work and are housed know, the government knows.

Everyone knows, apart from maybe the end consumer, everyone turns a blind eye. They turn a blind eye because it keeps costs down and profits up.

In my local Sainsbury's, near the beginning of the English strawberry season, a 300g punnet of strawberries at 99p, and not even on special offer. And why this price? The strawberries were 'grade II'. Absolutely nothing wrong with them apart from they were an assortment of sizes. They were in fact quite tasty, although not as tasty those I had off the Guildford farmers market at the beginning of June or those I had off the Farnborough Tuesday Market on the second day of Wimbledon at 50p a punnet.

According to Sainsbury's there are 20 varieties of lettuce on their shelves. I must have blinked and missed the other 19 varieties! In my local Sainsbury's I am lucky if I find any lettuces on the shelves!

Not that they do much better with anything else.

On the first day of Wimbledon they had no strawberries, and few days later all they had was a couple of punnets of rotting organic strawberries.

The lack of good food is itself indicative of a wider problem – clone town – every High Street, every town centre looking the same, independent retailers driven out by retail chains.

In a UK supermarket it will be the same varieties of lettuce, if you can find variety at all, all the year round. In France, not only is there variety, but the variety changes with the growing season.

There is a very high price tag attached to our green leaves.

Lettuces are sprayed more than any other salad crop. Twice as much pesticide as in the 1980s.

The supermarkets say we want this cosmetic perfection. As with uniformity of size, were we ever asked?

Before 1992, washed and ready-to-eat bags of green leaves masquerading as salad did not exist. From 1992-2002, the salad market has grown by 90%. By 2002, it was worth £1-92 billion, more than either the sliced bread market or the breakfast cereal market.

Must be good news, better than people pigging at the local McVomit.

Err, not quite. Salad leaves several days old, deprived of their essential nutrients, with garnish of chlorine, salmonella, listeria and E.coli, is not exactly a healthy alternative.

That the market has grown in value by 90%, does not mean we are all eating more salads. It just means supermarkets have found better ways of ripping us off.

In fact, over this same ten year period, the volume of salad consumed has only grown by 18%. And that is only because we have got into the habit of eating out of season, with salads being shipped in from around the world.

As the market for bagged green leaves took off, so did the number of incidents of food poisoning.

And it is not only our health and pocket that suffers, farmers and the countryside suffers too.

It is possible, through extensive agriculture, planting of a large variety of lettuces to suit soil, climate and season, to minimise, if not eliminate, pesticide use. But this is not what supermarkets want. They want a handful of large firms who can supply their distribution depots.

A few boxes of lettuce are sampled at the depot. If these fail the arbitrary inspection, and it is arbitrary, often supplies are failed on a pretext due to over-supply, the entire lorry-load will be rejected.

Should the farmer dare to complain, he can expect automatic delisting as the supermarket's supplier.

There used to be dozens of market gardens in the Thames Valley, now there are less than half a dozen left. The only way these market gardens survive is through restaurants, box schemes and farmers markets.

But it does not have to be so.

For many of us, we no longer have a Hight Street greengrocer. In Upton Park, in east London, they are very lucky. In the main street, Green Street, there are at least half a dozen greengrocers. Then there is the excellent Queens Market, an undercover, century's old street market, with a vast array of fruit and vegetable stalls. And yet the local mayor wants to destroy it, sell the site of the Queens Market to Wal-Mart for an Asda superstore!

Markets could and should do more to educate the public. A start would be to label their produce with the variety. We see this with apples, occasionally with potatoes, sometimes with plums, but rarely with any other fruit or vegetable. This would help create a more discerning customer, giving markets a further advantage over supermarkets in addition to that of price, seasonality, quality and freshness.

Markets traders know how to handle their produce, know what is in season and what is not. By labelling with variety, they will encourage the public to be more discerning and this is an area in which supermarkets would be unable to compete.

Not all farmers markets are what they are cracked up to be. The Guildford farmers market has too few fruit and vegetable stalls, and these have a poor selection. The one exception being Isle of Wight Tomatoes, who on their stall have an excellent selection of tomatoes – Tiger Toms, Jack Hawkins, Teardrop, Salsa, Golden midi plums – varieties you would never see in a supermarket.

Andy Johnson of Riverford Farm grows for a veg box scheme. He grows a different variety of lettuce for each week of the growing season.

The Seeds of Kokopelli, an excellent guide to seeds, shows winter lettuce, spring lettuce, summer lettuce, cos lettuce. For cos lettuce alone, there are descriptions of over 30 varieties of cos.

HDRA have around 30 varieties of lettuce in their Heritage Seed Library.

Originating in Canada, Seedy Sunday was launched in Brighton four years ago. It was an amazing success and is sweeping across the country. It is illegal to sell many seed varieties, but not illegal to sell the produce or to save and swap the seeds. Seedy Sunday is the opportunity to swap seeds, and then grow your own varieties, not subject to any supermarket diktat.

If we want quality salads, then growing our own, swapping seeds, supporting local markets, farmers markets, veg box schemes, family greengrocers, is all that is left between total domination by supermarkets and loss of all our traditional varieties.

The Campaign for Real Lettuce

Linda Johnson-Lee has launched The Campaign for Real Lettuce