Faslane Blockaded - All Gates Closed Down

Faslane, a Royal Navy submarine base on the Clyde, is the largest and deadliest military base in Scotland and home port for all four British Trident nuclear armed submarines. Nuclear weapons are the ultimate expression of militarism - only about 60 miles (90 km) away from Gleneagles.

Among those blockading Faslane is a broad spectrum of protestors, from Parliamentarians and Church leaders to anti-capitalists involved with the Dissent! network.

Updates :
12.55pm : All gates remain blockaded - people in high spirits. Clowns army has a presence there as well as many other groups. 10.30am : All gates remain blockaded
09.30am : Faslane is fully blocked - all entrance gates are blockaded with people locking-on. Numbers estimated at up to 2000. One person scaled the perimiter fence gaining entry to the base, and has been arrested.
09.00am : See Early report 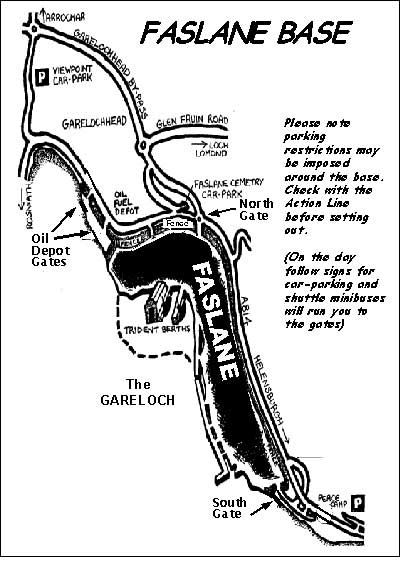 Delegations of activists from countries including the USA, Finland, Sweden, Belgium, Germany, France, Spain, Italy and Greece are planning to help shut down the base, with many planning to use sophisticated non-violent blockading techniques, including metal piping, chains and passive resistance. A carnival atmosphere is expected, with a 60-strong Samba band from Berlin amongst those expected to take part. A spokesperson for the Faslane G8 Team, Joss Garman, said: "On Monday, we will make history by shutting down the home port for Britain's Weapons of Mass Destruction. Whilst the G8 leaders will talk about ending poverty, we will show how they are creating it through war and the arms trade. You can?t end poverty, unless you also end war." He added, "Whilst 80% of the world lives on less than a dollar a day, Britain alone is spending £1.5 billion per year on a useless and illegal relic of the Cold War, and propping up the arms trade to the tune of £900 million per year - fuelling conflict and poverty across the developing world."