Carnival of Full Enjoyment penned in at Canning Street by police

Between 1245hrs and 1600hrs, some 100 to 200 demonstrators were penned in at Cannign Street, near the West end of Princes Street. There was little violence. The protestors were being as peaceful as the police were. For more than 3 hours, the demonstrators made the street as comfortable as they could, despite the intimidation from police lines.

Bloc shows his arse to the police - video/x-msvideo 1.7M

The worst of the scuffles - video/x-msvideo 1.4M

Dadnce down the police - video/x-msvideo 5.5M 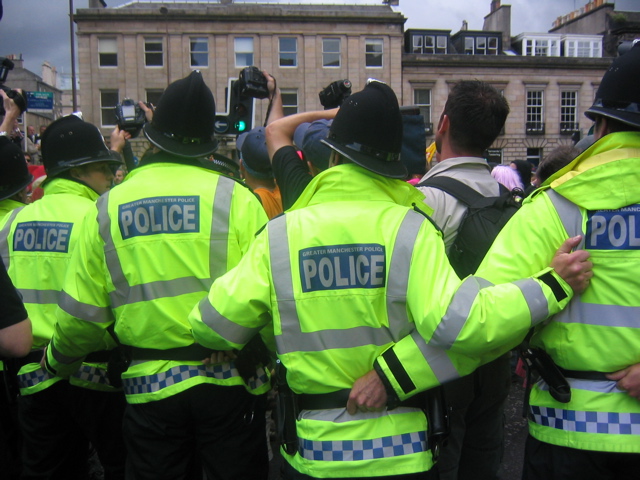 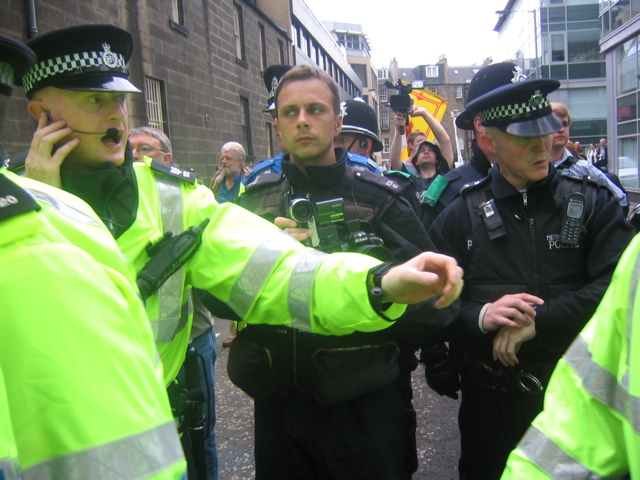 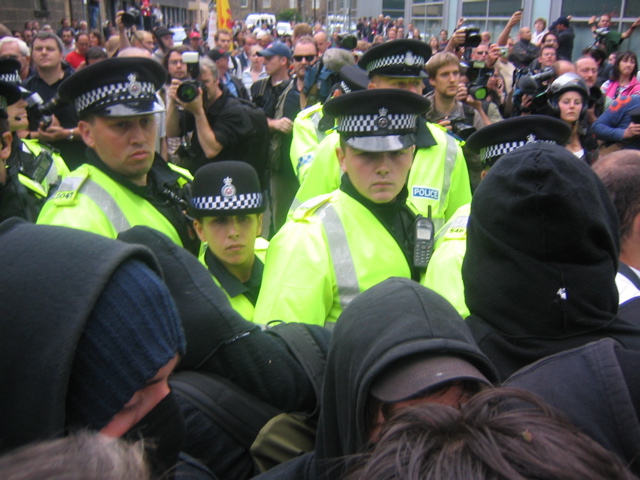 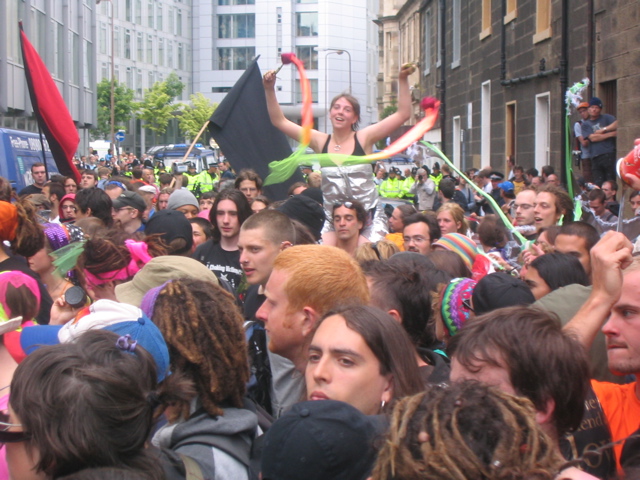 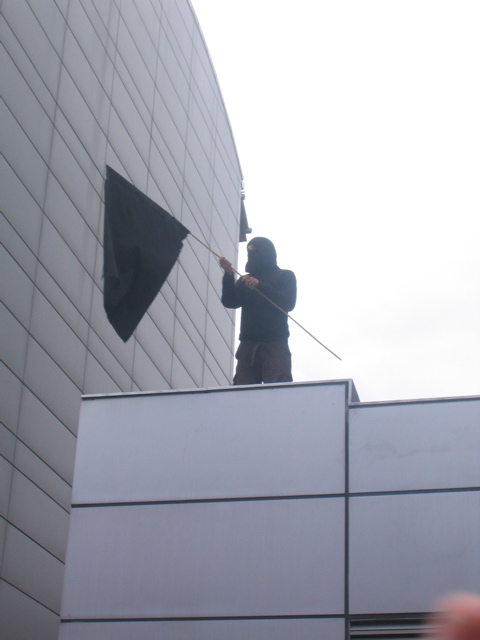 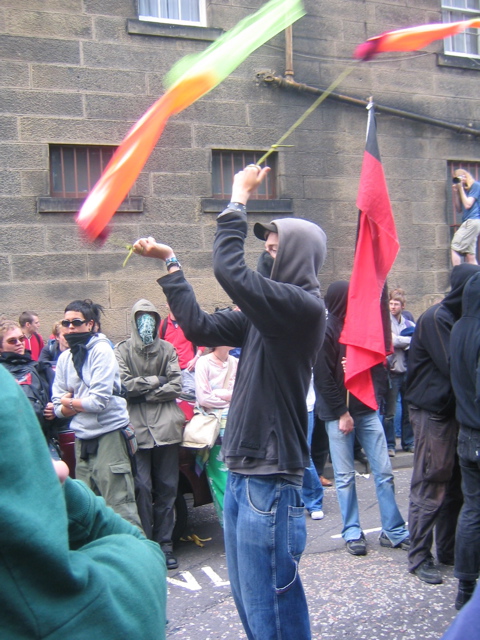 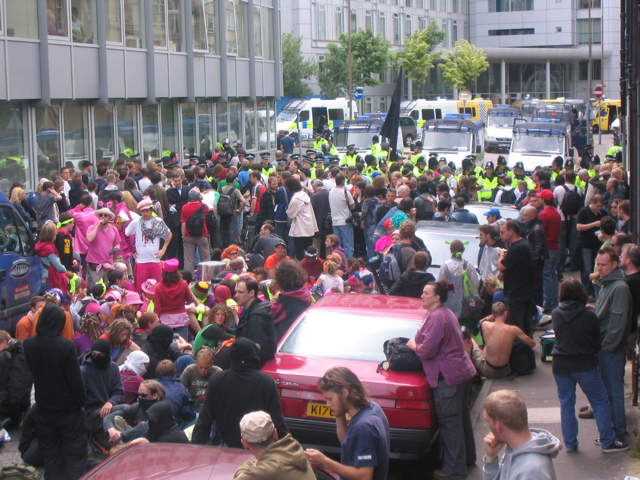 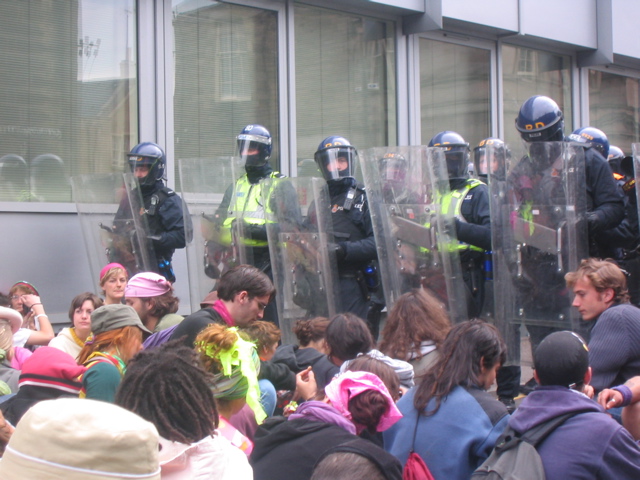 Sitting in front of riot police

"We have always said that we wanted to assist those who wish to make peaceful protest, but in our view it is clear this was never on this group's agenda.
"This is not about protest. This is unacceptable and irresponsible behaviour".
-Assistant Chief Constable Halpin on the Carnival of Full Enjoyment

The above is an excerpt from the BBC website (

What happened at Canning Street today was very different from the violent picture that has been painted by the press. While most of the papers have concentrated on violence as a theme for the carnival, what I saw today was more human than that. There was music, dancing, intimidation from the police, “Bloc-ball” keepy uppies, skipping, police-hat-Frisbee, lectures about police rank, poi, medic arrests, naked buttocks, and much more.

There was a sense of fear in the air when the demonstrators were first penned in at Canning Street, which heightened with the deployment of riot police. Police formed a line at either end of the street, allowing no one other than journalists to pass.

The height of the tension was when police advanced a small distance to be met by a chain of Black Bloc. Push was met with shove; neither side allowed the clash to escalate. Police then gave the demonstrators room to breathe, allowing them some space to enjoy what was a bland street.

Between these moments of tension, the demonstrators showed some high spirits with banging drums and dancing. “Bloc ball”, involving kicking a crushed drink can in the air, helped pass the time for some, as well as skipping. There were sporadic bursts of music and dance from the colourful samba band throughout the afternoon.

More than 3 hours had passed before the demonstrators were allowed out of the street, one by one, after being searched.

I hope that the photographs and video clips paint an honest picture of today’s events at Canning Street.