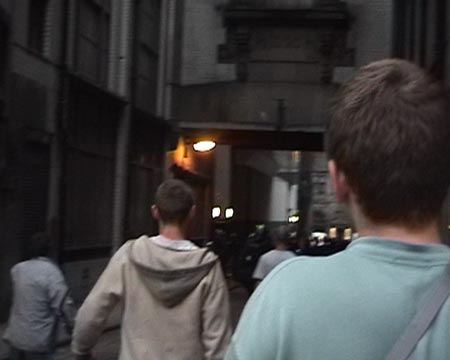 Locals facing up to cops in laneway 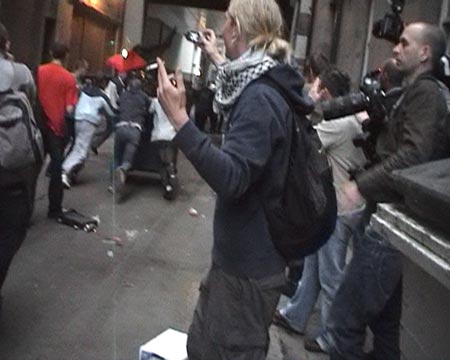 Shoving the dumpster at Police lines 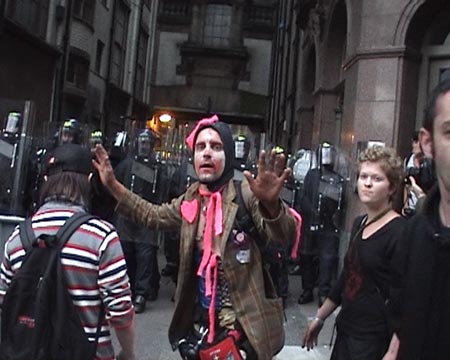 CIRCA Clowns trying to stop people throwing stuff at Police 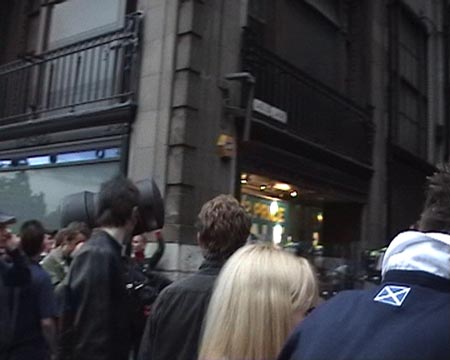 People dumping a bin on the riot police

....So I came out of the discussion with the intention of heading back to Muirhouse, and looked east, back up Princes St. A row of yellow jackets in the distance and police lights. This was 8pm. There arent -still- people coralled in from earlier on, are there? I cycled up and it was hard to find out what was happening. There seemed to be no 'centre' of activity, and there were certainly no 'activists' left at this point. I cycled around a long way to get to the other side of the police line, where 4 or 5 people were being detained with plastic handcuffs in front of a boarded up mobile phone shop. They were definitely not pink, black, clown, or any other block. Just ordinary folk. An onlooker said they were being arrested for refusing to move on when ordered by a Police officer, but I cannot confirm that.

They were put into vans, with a chorus of boos and hisses from the crowd, chanting to let them go. Next thing a glass bottle hit the line, racking up the tension. The cops were getting nervous, and the crowd were telling them to fuck off (because most of the riot cops were English rather than local Police, it seemed). The cops jumped into the crowd and snatched a teenage girl, provoking more anger and the occasional missile from the crowd. A bagpiper blowing out traditional tunes seemed to be stirring the Scots into a bit of an anti-establishment fervour. It seemed as if this crowd were mostly just turned up after they saw what was happening on the news, and joined in the activities themselves.

What happened next was bizarre and unprecedented. A group of about a dozen riot cops were left in a laneway while the others had been taken away in vans. Possibly they were just waiting around for an empty van to come and pick them up. Several people saw them down the lane isolated, and the next thing they were being stoned and bottled by people steaming up the laneway. Bottles were fired at them from close range, a dumpster was pushed straight at the line of shields, and a traffic cone and a bin were thrown at them when they charged their way back to the junction of the street.

Four or five of the Clown Army showed up at this point, trying to stop people throwing stuff at the cops, and making faces and generally being silly right in front of the Police. One female clown was nearly hit in the head with the big traffic cone, and their attempts to calm the situation didnt really work at all, so they left the situation fairly quickly. Within a minute a huge amount of Police vans arrived into the area with sirens squealing, pouring out more padded riot units. This sent the crowd scattering. They also brought out the dog unit, forcing people away from the laneway, threatening to use the dogs on people that did not back off.

Eventually the Police got all their Officers back into vans, and retreated out of the area rapidly. The crowd cheered and was chanting Anti-G8 slogans as well as "Whose streets? Our streets!" The McDonalds and the Topshop right in the thick of all this survived without a scratch though. After a while people filtered off, it was getting late and dark. I think in this situation just the sight of the Police on the street itself was drawing people toward them and getting their blood up, as soon as they withdrew completely the tension vanished...