Early morning at the Sheraton

If Scotland's cops want to look a bit slicker, they want to take a few more cabs. 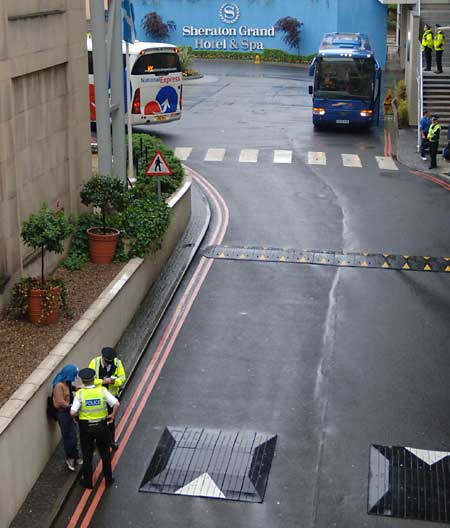 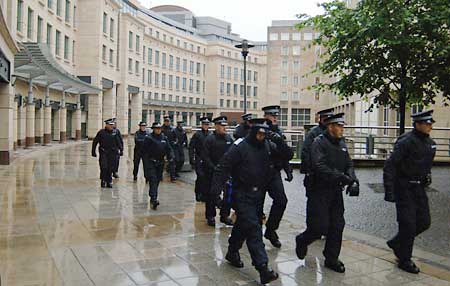 If Scotland's cops want to look a bit slicker, they want to take a few more cabs.

"They'll not bring 'em out the front" said mine. "Go round the back, there's bridges and carparks, you can look down onto where the taxis pick up"

At quarter to six Scotland's finest were lying down under the Clydesdale bank colonade. I'd already made two circuits of the building before the cops stopped me. They claimed I had to give name and address under the Crime Procedures Act if they suspected me of committing a crime. "Not that we suspect you of anything yet, but if you don't tell us we'd find that suspicious".

I declined to give an address, they let me go anyway.

At 6.30 they arrested a guy in the alley leading to the cab pick up. Suddenly it dawned on them it was no good just watching the front door and several dozen black clad coppers came running across the bridge. Within minutes the whole plaza was a sterile area and I was prodded out on to the street.

There was very little attempt to challenge the police lines. Heavy rain dampened the mood quite a bit, and many people drifted away, although coaches of Japanese delegates were successfully chalenged around 9am (see later newswire item).