John Mellor travelled to Burundi to meet the family of Richard Ndereyimana, one of the victims of the bloody attack on the "Titanic Express" bus, which was ambushed en route to Bujumbura on December 28th 2000, and in which Richard's fiancée, Charlotte Wilson, a British citizen, also died. 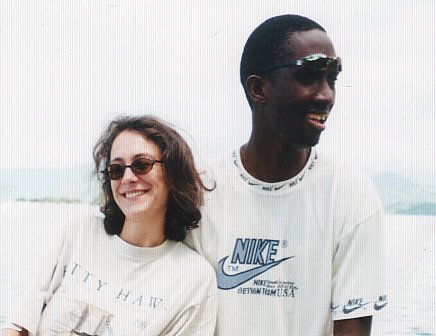 How does this family feel now that Agathon Rwasa, the leader of the group responsible for the massacre, is being feted as an international statesman? The international community, who less than a year ago dubbed Rwasa a "terrorist", suddenly seems to have lost its memory. In this family, despair and fear combine.

The elderly mother of Richard Ndereyimana lives with her daughter Adrienne in a crowded district of Bujumbura. In the living room of their modest house, she plays with Nana, her young grand-daughter. Adrienne sits beside her, breastfeeding her youngest child. A neighbour has just switched on his radio; it's time for the news in Kirundi on the government-run radio station. The headlines drift through into Adrienne's small living room. The top story tells of "positive developments between the government and Agathon Rwasa, the leader of the Palipehutu-FNL rebels".

The fmaily listens, dejected, to the latest news. For some time, the Burundian authorities have described Agathon Rwasa simply as a "partner in negotiations", to be dealt with like any other. And yet this man is responsible for the deaths of countless innocent people, of whom even the most well-known - the 21 passengers of the "Titanic", and the 152 Congolese refugees slaughtered at "Gatumba" in August 2004, no longer count. Even the large international organisations seem to be suffering from amnesia. Agathon Rwasa, the man previously dubbed a "terrorist" and sidelined by the UN and regional heads of state, has regained, through the unfathomable magic of politics, a strange kind of innocence.

I was waiting for "my children"

It's very difficult for Richard's mother to talk about "my children", as she calls Richard and Charlotte. But her memories are painfully clear as she describes the afternoon in December 2000 when she waited in vain for them.

"Richard was going to introduce us to Charlotte. We'd never met her before. We'd prepared Mukeke fish - Richard's favourite. But we'd also made some chicken in case his girlfriend, this young English girl, didn't like fish. I was looking forward to see my children. It had been raining the whole afternoon" - the elderly mother's voice chokes up.

Charlotte and Richard ate neither fish, nor chicken. The "Titanic Express" bus, which they had boarded in Rwanda, where they both worked, fell into an ambush that afternoon. Adrienne, silent until now, continues the story.

"We found them at the morgue, the next day. Richard had been shot in the head, chest and legs. As for Charlotte-", she stops abruptly - "A Congolese survivor of the massacre told us that Charlotte had offered to give them everything she had if they would spare her life". Adrienne searches for the right words.

Adrienne recalls another terrible detail. "They were completely naked; the rebels took everything from them. Everything."

According to eyewitnesses, the Palipehutu-FNL left their "signature" at the scene of the crime. Of the passengers who were released unharmed, all were either Hutus or Congolese - none was Tutsi.

"I asked if we could bury them together", says Richard's mother. Adrienne tells me that her mother didn't want to separate the murdered couple, but they had to explain that Charlotte had her family in England, and her body had to be returned home.

"Tell the Wilsons to carry our voice"

The two women fall silent. They seem to have said everything there is to say. Richard's death remains an open wound. Since that time, his mother's health has slowly declined. She fears for her remaining children. She doesn't understand why those with power in Burundi are so eager to hold meetings with the murderers of "my children".

Several years ago she had to flee her home in the south of Bujumbura because of repeated attacks in the area by Palipehutu-FNL.

"Rwasa took my children, and drove me from my home. I have no place of my own any more; I'm reliant on my daughter - and now they tell me that this man will soon be one of our leaders!"

A look of revolt appears in her eyes for a brief moment, but is gone just as quickly.

Adrienne speaks more forcibly now: "The parents of all those who lost loved ones in the Titanic know each other; we are ready to go to court, but here we are nothing - this place is corrupt and there are killers everywhere. Tell those who are abroad, in Europe, to carry our voice - ask Charlotte's family to tell the world of our distress. We want justice."

In Burundi, this family feels powerless, defenceless against an Agathon Rwasa courted by the international community and who, it's quite possible, will soon be given a powerful government position despite all of his crimes.

As I'm leaving, the elderly mother of Richard Ndereyimana has one more thing to tell me:

"You know that we are a Christian family. Every evening I recite the Lord's Prayer. But at the moment that I say 'Forgive us our sins, as we forgive those who sin against us', my seven-year-old granddaughter always asks me 'But grandmother, even those who killed our Uncle Richard?'"

"I don't know how I should answer", she tells me.