Thank God we live in a free country...

I spent the day on the streets of Edinburgh, where I witnessed democracy and the right to peaceful protest in its full glory.

After months of negotiations, G8 Alternatives had negotiated the right to protest against the policies of the G8 counties, seen by many not as the solution to the world's ills, but the principal part of the problem. 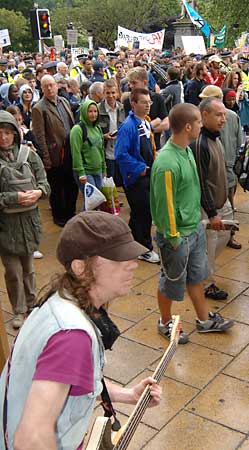 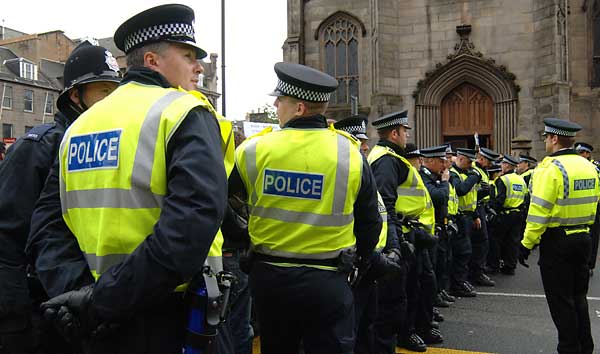 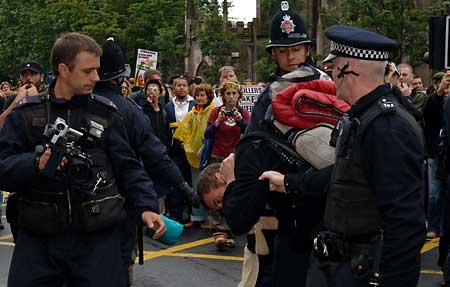 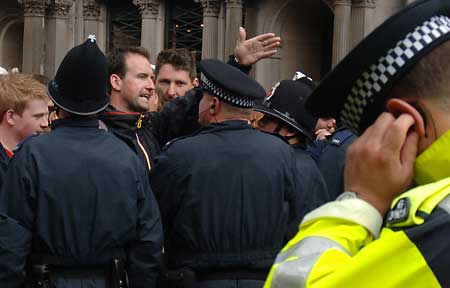 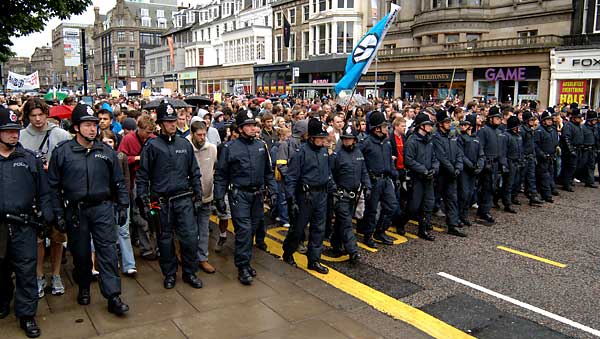 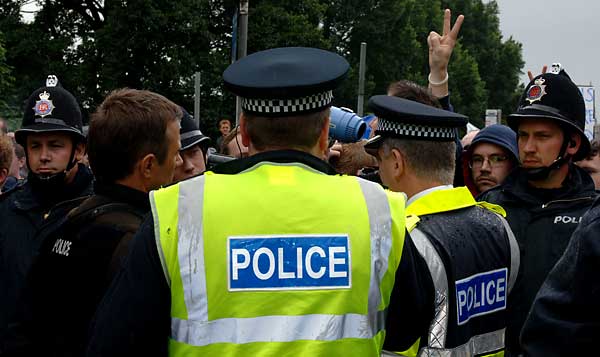 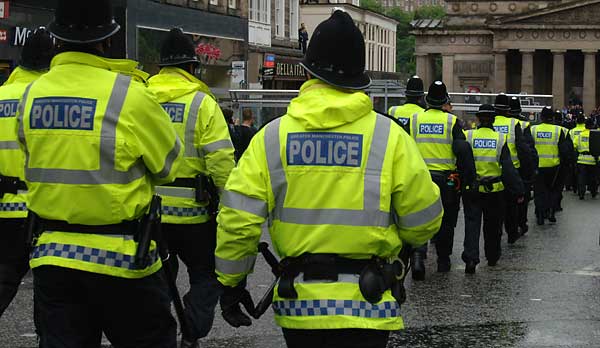 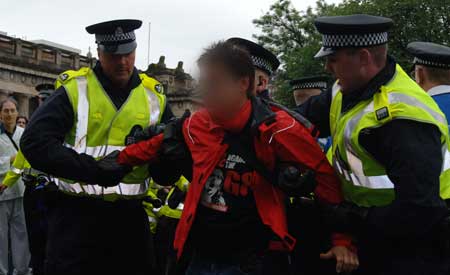 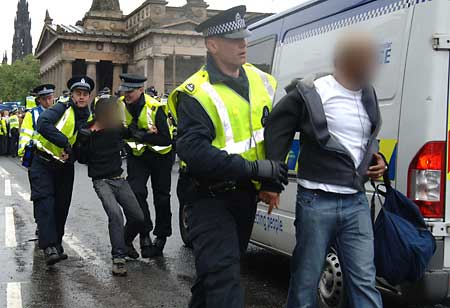 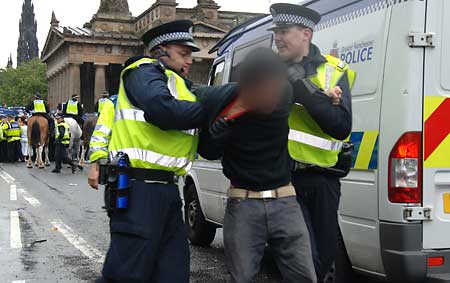 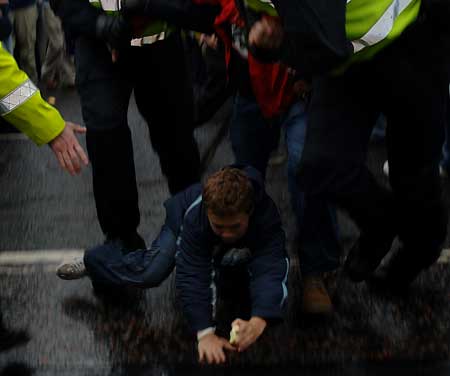 pushed to the ground

No journos allowed as witnesses

I spent the day on the streets of Edinburgh, where I witnessed democracy and the right to peaceful protest in its full glory.

After months of negotiations, G8 Alternatives had negotiated the right to protest against the policies of the G8 counties, seen by many not as the solution to the world's ills, but the principal part of the problem.

A thousand or so people showed up to board their coaches to Gleneagles. From the outset they were told either that the march had been cancelled, or that the location was dangerous and that they were advised not to attend.

But the choice to go was theirs.

Clearly their choice to go was the wrong choice, for the buses were immediately prevented from leaving by a blockade of police vans. Only a sit down protest persuaded the police that it would be a neater solution to allow them to leave,

Except that many of the coaches were then stopped and corralled well before their destination.

Phone calls back to Edinburgh persuaded many not to bother boarding the remaining coaches, and a hasty negotiation between G8 Alternatives and the police led to a concession to march in Edinburgh.

Despite the change of plan, the march of 250 - 300 started off along Princes Street towards the West End. A line of police kept progress at a snail's pace, and on its eventual arrival at St John's Church a pen was set up where marchers were left to stand in the heavy rain.

With aplomb similar to the grand Old Duke of York, the police now decided to march them down again. And at a similar pace, the march retraced its steps through the rain to the National Gallery, where a new pen was put in place.

The march was in every way peaceful. Impromptu buskers set up by the side of the road, and the crowd was cheerfully singing along to the Pink Floyd's "Teachers, leave those kids alone". Bubbles flew from the crowd, balloons were launched, young coppers chatted up some of the women.

Then an extraordinary thing happened.

New divisions of police, Met and Greater Manchester arrived and were quickly deployed around the marchers. Lines of police forced bystanders back from the pen.

And then snatch squads were sent in, pulling people from the crowd. I saw several people fall heavily on to the road as they were removed, then dragged bleeding to police vans. Some shouted, "Why are you arresting me? I did nothing, this is a peaceful protest."

Protesters responded with boos, but the remarkable thing was the response of the local, Edinburgh bystanders.

"Disgrace", "Whose streets? Our streets", and "How can you call this a free country?" were amongst the calls. And this from middle-aged couples and mum's with toddlers in pushchairs.

And then it got worse.

Mounted police were brought in to force the small pen of protesters up The Mound. Three lines of police were formed to prevent bystanders - and accredited press - from seeing what was going on.

When Riot Police arrived on the steps of the National Gallery and were deployed round the East side I insisted on being let through the police line. But, along with other journalists, including one sarky reporter from the Daily Mail, we were refused.

What statute were they invoking, I asked? No reply. How can they prevent the press witnessing the outcome of a squad of riot police being set on peaceful protesters?

What happened on the hill? Right now I don't know.

I just watched the BBC news coverage of the event and they didn't mention it. Presumably they were excluded also.

So what's this all about?

Clearly the intention of the police, controlled by their political masters is to deny peaceful protests, replacing it instead with propaganda material designed to divert attention from the real issues of Gleneagles.

Together with remission alkies like Midge Ure ("I don't understand what they're protesting about") and Saint Bob ("Already Bush has made concessions as a result of Live8") the intention is to dupe the world into thinking the G8's mission is to save Africa and eliminate AIDS, a noble cause that's being deflected by mindless violence.

And the willing lackies of the corporate press are spewing the message out - what do we all think tomorrow's headlines are going to say?

So isn't it good to live in the free world, where you can say what you want without fear of hindrance?

If what I saw today is democracy, no wonder the Iraqis don't want it.