Today Edinburghs good citizens had their worst fears realised as hundreds of masked, black clad troublemakers surrounded the Sheriton hotel in the town centre. Terrified locals looked on as the gang who were thought to be behind mondays violence took control of the area and surrounding streets.

DRAMATIC PICTURES AND EDITORIAL BELOW! 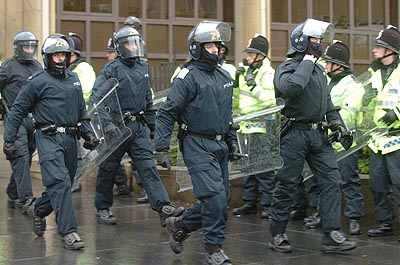 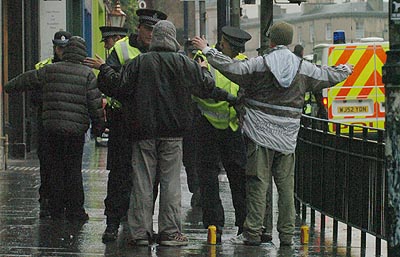 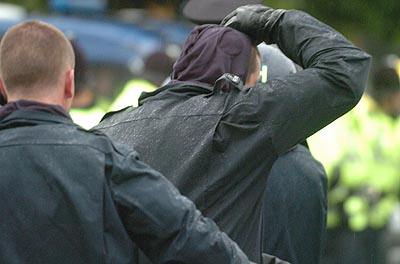 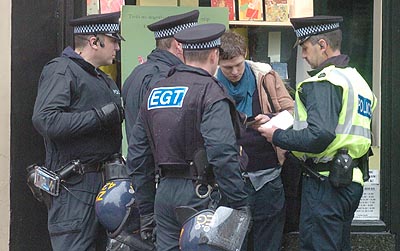 A spokesman for dissent said:

"It is clear that these people are not interested in dialogue. They just want confrontation with anything and anyone. We believe that these people were from the secretive 'Police Bloc' who attacked peaceful anarchists on monday. Today they showed their true colours by aggressively taking to the streets to allow another gang (thought to holed up in the hotel) to travel to a secret counrtyside location to plan yet more violence and enviromental chaos."

It was also clear that many of the blockaders had travelled from outside of the area to cause trouble. Intellingence sources believe that many had come from as far afield and Newcastle, Liverpool, The Midlands and Sussex. One notorious group from London who call themselves The Met are believed to be coordinating the chaos. The spokesman finished with this advice:
"Everyone needs to be vigilant against these lunatics until they have left Edinburgh and things can return to normal'".