A wide selection of photos from the protest events in the town of Auchterader near to the Gleneagles hotel. Also some text of my experience of the day. 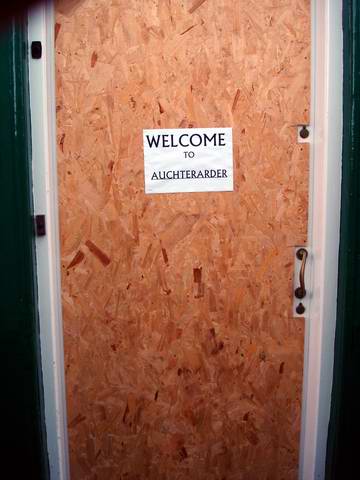 Some shops were boarded up in anticipation 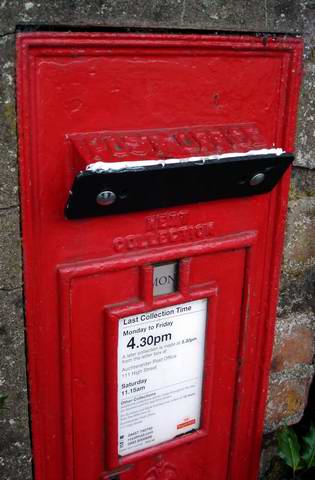 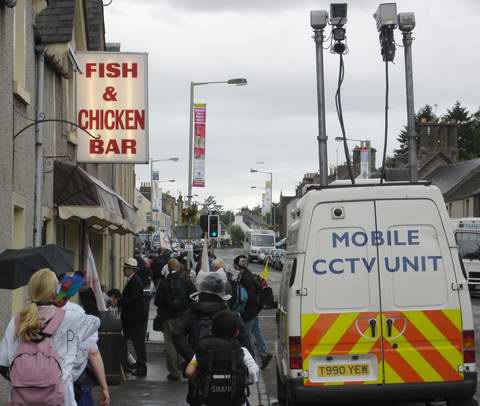 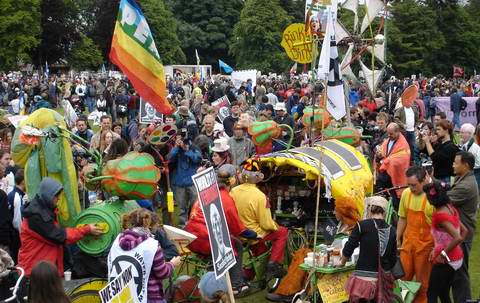 Thousands crammed into the park 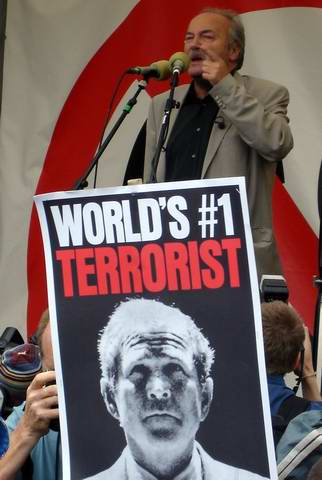 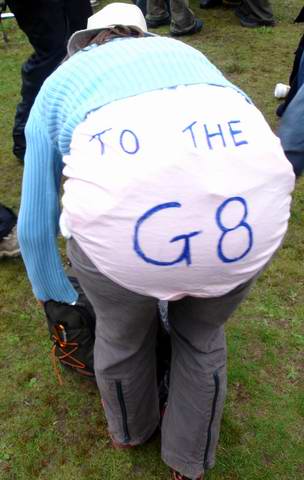 And only wearing pants 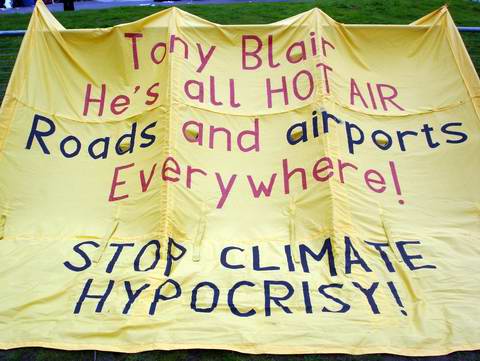 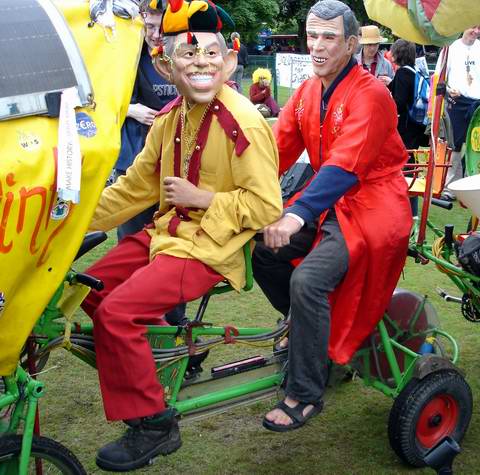 Bliar & Bush solve it - if only 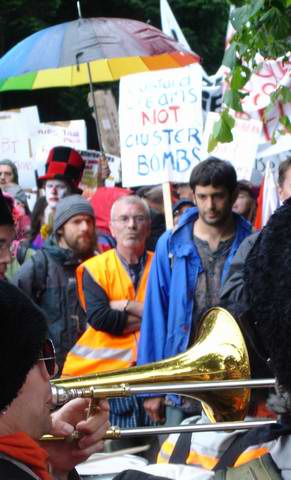 Wall of oppression with fence 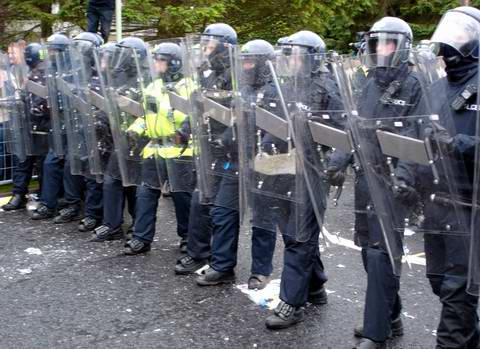 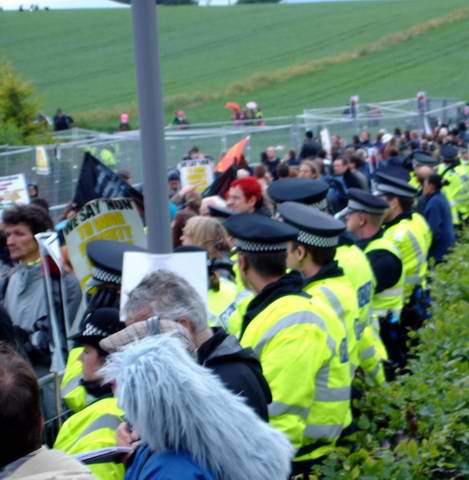 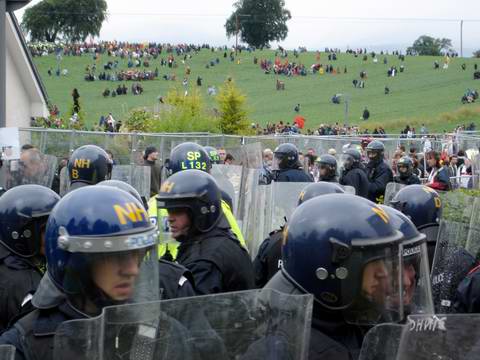 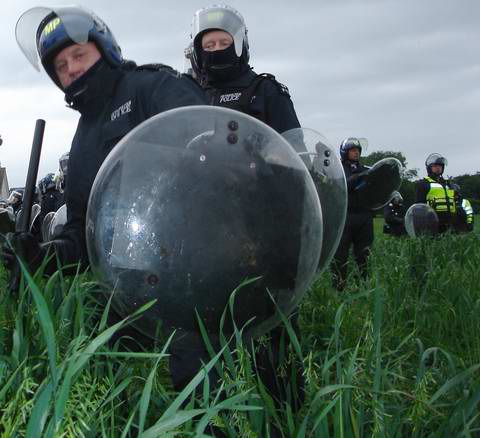 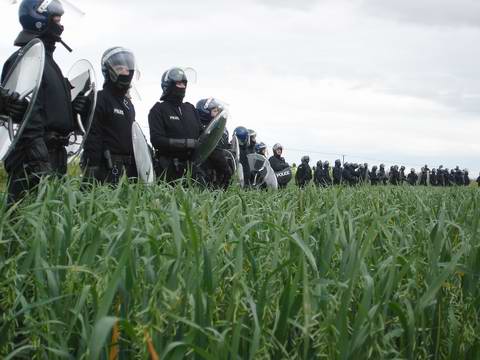 Flattening the field of oats 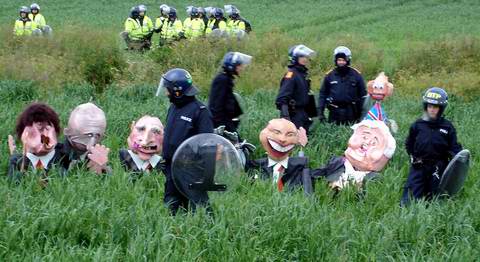 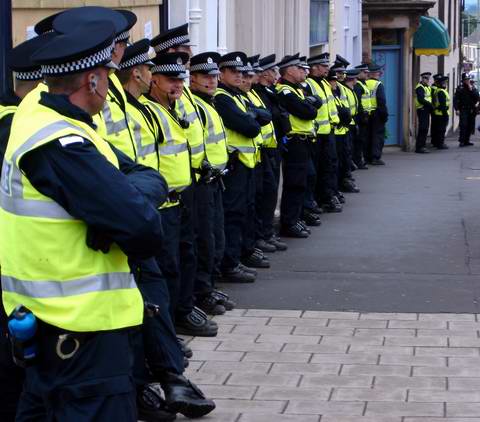 High Street on our return 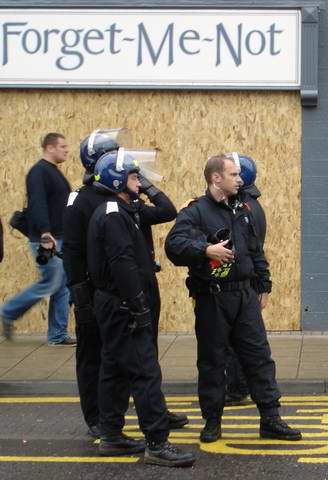 It was quite a challenge just to get anywhere near Gleneagles. There were police checking every vehicle at the toll booths northbound on the Forth Road Bridge while dozens of their colleagues tried to intimidate everyone by forming a dense dayglow yellow line on a gantry high over the road. We couldn't take photos without arousing their suspicions. “Where are you going?” they asked us.
“To the highlands” we vaguely replied which they seemed to accept. Much nearer to Auchterader, there was a more serious road block. They stopped us and said in a sinister way: “We need to ask you some questions and find out who you are and where you're going”.
“But we're press” we said, showing a press pass to which they instantly waved us through. The difference a small card can make!

Once in Auchterader, we found a town partly under siege and partly in a state of carnival. Bemused locals watched the streams of people, took photos and waved to them from their front gardens and upstairs windows. Some of the shops were boarded up and closed while others were displaying huge “Make Poverty History” banners in their windows and were doing a roaring trade from the massive influx of visitors. Helicopters buzzed around overhead and incredibly, there was a tethered blimp floating high above the hotel, doubtless loaded with hi-tech monitoring cameras. There was a huge rally in the park - maybe 5000 people - with powerful speeches by George Galloway and others. People had gone to great lengths to devise all kinds of colourful costumes and banners. The Rinky Dink eco powered mobile sound system was there pedal powered by Bush and Bliar – if only. The Infernal Noise Brigade from Seattle created a great stirring wall of sound. After the speeches, the march left the park and moved slowly and noisily through the narrow roads, hemmed in by police for much of the way.

...And then it met the end of the road. The designated route turning off to the right and then back towards the town centre. This was as close to our glorious world leaders that any of us were to get. One couldn't help thinking that the police had carefully engineered it as a flash point. There were hundreds of them tooled up in riot gear with rows of mounted police to their rear – a solid wall of oppression behind a relatively flimsy wire mesh fence. They looked so hard and threatening that they were effectively goading the few hoodies who gradually accumulated in a small eddy close to the fence while the main flow protesters continued round the corner. On the pavement on the inside of the corner, mainstream journos had formed a dense camp, watching and waiting for trouble. After a little while, one of these journos exclaimed excitedly “Great, the hoodies are doing something!” They were lifting, bending, separating and flattening the fence panels until eventually the police line was exposed along most of it's width. Then suddenly and with no warning the police charged. They screamed abuse and roared like a pack of stampeding elephants, viciously pushing quite obviously innocent bystanders back along the road. At least one of the riot police was in a nearly psychotic state, repeatedly and pointlessly battering two traumatised women against the fence near to me with his shield until a combination of me yelling “Stop it! Stop it! Stop it!” and one of his colleagues physically restraining him reduced him to a calmer state.

Because of all the distraction, further round the corner, right on the edge of the town, there was a mass break through by hundreds of cheerful protesters into a field of oats leading towards the hotel grounds. Massive military Chinook helicopters then flew low overhead, landing ahead of the advancing line of protesters and each helicopter amazingly disgorged about 100 riot police at a time like a scene from Vietnam. I've never seen the police and army working together like this before. The riot police formed a continuous line in the field, pushing the protesters back onto the road running round the edge of town and very effectively flattening the farmer's crop – a bit like a GM protest in role reversal. This part of the event was much more good natured, most of the police had been switched back into human mode. The protesters were wearily shooed back to the town centre where the streets were lined with far more police than were at the start of the march. Through the front rooms of the houses, we could already see the town residents watching the mainstream media's coverage of the skirmishes on their TVs.

The entire day had a fairly predictable outcome. The media had got their fix of small scale “violence” which of course pales into insignificance compared to the violence of tens of thousands dieing from war, famine, disease and poverty each and every day. No one had come within eyesight or earshot of the warmongers in the hotel, allowing these eight crazed men and their equally crazed army of advisors completely unchecked control to decide as to how many millions in the world would live or die from war, famine, disease, poverty and of course escalating climate chaos until next year. The police will doubtless crow “we told you so” about the “hard core of trouble makers”.