These are some photos and personal account of the G8 demonstration in Auchterader, and of the actions and blockades against the G8 Summit that took place earlier in the day. 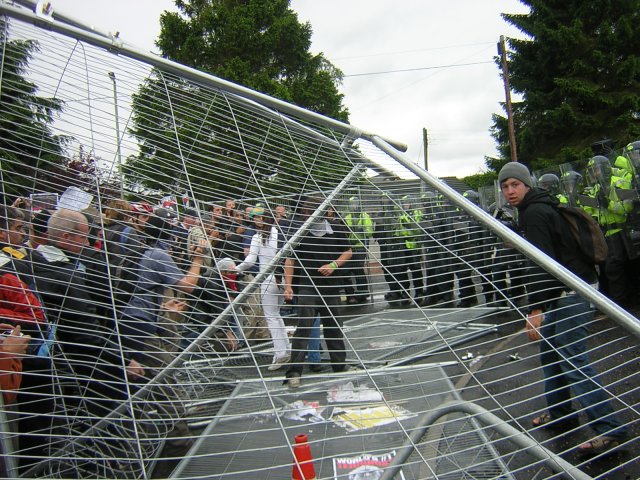 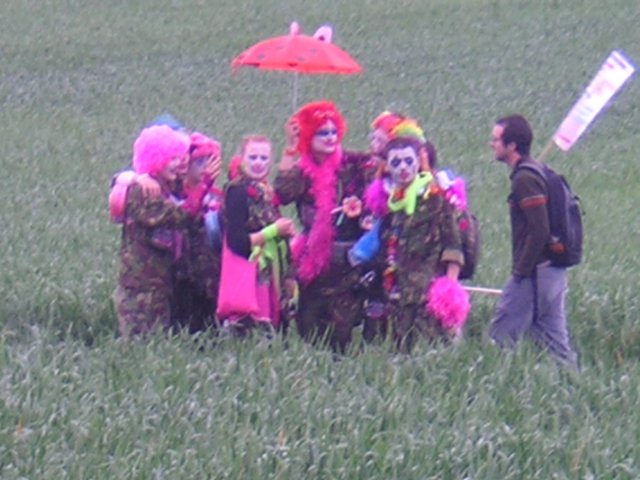 CIRCA opeartind in the fields around Gleneagles 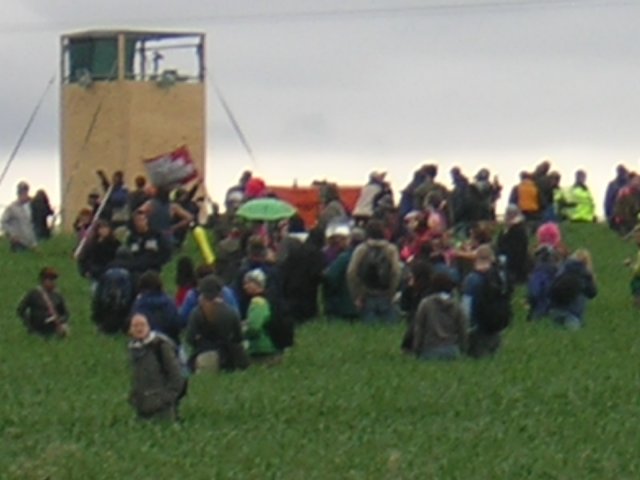 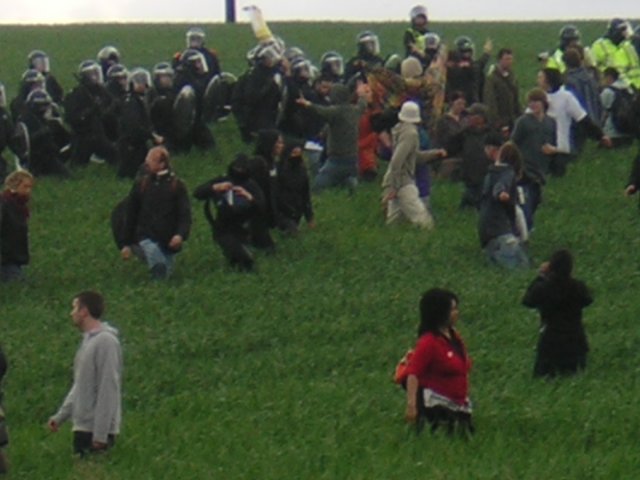 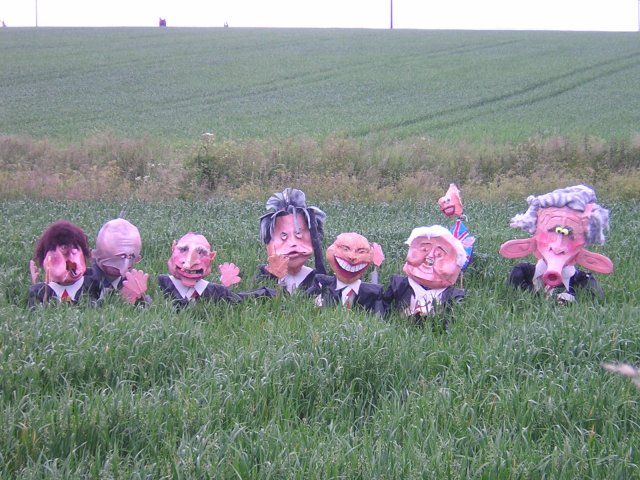 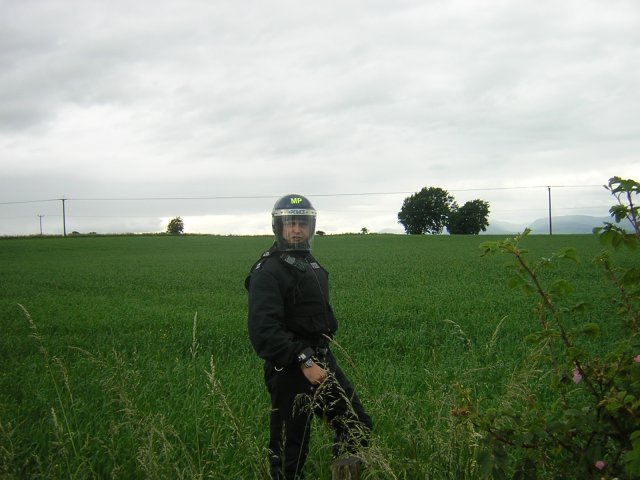 And a sad looner wasn't having too much fun 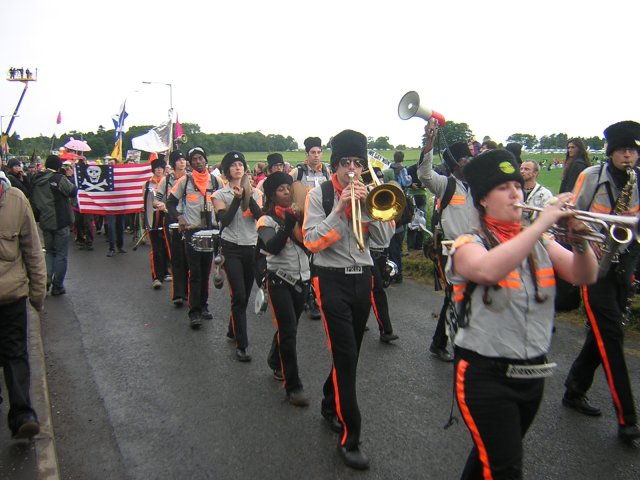 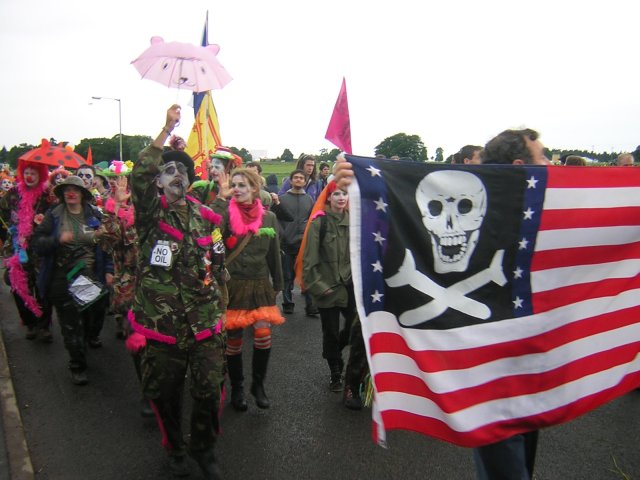 ... were joined by a Batallion of the Clandestine Insurgent Rebel Clown Army

Blockades and actions against the G8 Summit in Gleneagles started early on Wednesday 6th. By the time people were gathering in the Scottish town of Auchterader, several thousand people had already been engaged in very determined blockades that started as early as 4.30 am. These took place all over the area surrounding the Gleneagles hotel, causing major disruption to all roads, A9 motorway and accesses to the site of the G8 Summit.

The first group of protestors that formed a blockade left the Stirling Hori-Zone eco-village soon after 4 am. More than 1000 people formed a determined block' that moved to block the A9 motorway, which is the main access to Auchterader and the Gleneagles hotel. As they left the camp, a large number of riot police appeared, and soon started to baton charge against the crowd that was moving towards the A9 motorway. This group was well prepared and they successfully resisted the first police attacks. Eventually most of this crowd managed to make it to the A9 and, together with people that had made it to that point independently, they set up a very strong blockade. From that point on, police repeatedly attacked this crowd with very violent charges, thus trying to dismantle the blockade and force the people to retreat. The crowd fought these attacks for several hours using protective shields made of recycled materials, as well as defending themselves as hard as they could with the few elements available.

Although several protestors were injured and arrested in this action, the blockade proved to be one of the most successful of the day. This is due to the location (the main motorway in the area) and the timing (early morning when the Summit delegates needed to travel to the Gleneagles hotel)

From that time on, and throughout the morning, blockades continually sprung up all over the area. Some had been planned and prepared in advance by a wide range of affinity groups and tactics, others came together more spontaneously by groups of people that came together whilst roaming the hills and roads in the surrounding area.

Another successful blockade was that of the ‘kids Block’. This was a caravan of vehicles composed of people with children that formed an affinity group in the Stirling eco-village,. In the event it was also joined by a unit of the CIRCA, a samba band, people with mobile sound systems, and other protestors that joined it. This caravan, after moving around the area at very low speed so effectively creating a ‘mobile blockade’, it eventually stopped in the bridge of the A823 road crossing the A9 motorway, and formed a large blockade in there.

By this time it was already clear that, the major police operation which included numerous road blocks, thousands of riot police, hundreds of police vans, police horse units, and even helicopters, could not prevent thousands of very determined people from effectively shutting down the whole area surrounding the Gleneagles hotel. The blockades described above may be two o the most visible, but the list of actions is much longer, as many affinity groups and people engaged in a long list of less visible actions in the roads, country lanes, fences, trains and train stations of the whole area.

By 12.00 pm the Chief Constable of the police announced that the demonstration planned in Auchterader had been banned due ‘to previous violence throughout the morning’, and stating that “police could not guarantee the security of the people intending to demonstrate on the town”, even though the police has got a budget of 150 million punds to ‘provide security’ during the Summit. So at this time it seemed that the demonstration would be prevented from happening, whilst there were numerous reports that busses travelling to Auchterader were being stopped and turned back.

In the event, when we got to the town at around 1pm, we found a large demonstration already taken place. We were actually quite surprised to find such a large crowd, although at first it was difficult to have an idea of how many people was in the demo. But after having walked from the back of the demo all the way to the front, it became evident that the number of protestors would be between 8 and 10,000 people, and that the demo was marching straight towards the fence protecting the Gleneagles hotel. It seemed that most groups and people that had been engaged in earlier blockades were now converging in Auchterader. This demonstration had initially been organised by the G8 Alternatives ‘coalition’, but in the event, it became a focal point for most groups, networks and individuals determined to actively show their disgust to the human, environmental and economic devastation caused by the G8 policies all over the world.

The march started as the usual demonstration: people chanting slogans, carrying banners and flags, singing and drumming, and so on, but it was made up of people from all over Europe and the world. There was also a large battalion o the CIRCA carrying on some of their operations, and Seattle’s Infernal Noise Brigade and a large International Samba Band providing life sounds. When the head of the march reached the first fence, the atmosphere gradually changed into a more active forms of protest, and some people quickly started to try to dismantle the fence. Police reacted by changing into riot gear, and forming several lines with police on horses and on foot. This not prevented part of the crowd from taking on the fence, and eventually partially dismantling it.

Soon after that, a group of about 700 people trespassed into the adjoining fields, and moved towards the fence that actually forms the perimeter of the Gleneagles hotel or ‘red zone’. Before police could react and prevent any action by this very determined crowd, the second fence was also partially dismantled, and a watch tower attached to it also attacked. From that moment on, police activity increased substantially, and units of police on horse, police with dogs, reinforcements of riot police and even two military helicopters bringing in more police into the grounds, started to take positions and eventually charge against the crowds. But even so, the crowd maintained their ground for over and hour, whilst a group of about 100 people staged a sit down protest in front of the gap caused by the earlier breach of the fence. Eventually, and after a couple of hours of protestors activity and police moves, a large number of riot police using baton charges and horses, moved into the crowd from the top of the hill and pushed everyone out of the field.

When we left the area, we witnessed many police’s Forward Intelligence Teams becoming active in the town, and stopping and searching anyone that they considered ‘suspicious’. And although the Legal Support Team reported over 400 arrests, the day’s blockades and actions proved a show of strength and conviction of thousands of people determined to confront the policies of the global neo-liberal governance bodies wherever they try to meet. The day’s actions and blockades also proved, once again, that when different tactics and strategies work together with a common aim, dissent and resistance become more effective and possible.