While thousends of protesters blockaded the roads around Gleneagles in Scotland and demonstrators and hillwalkers reached the fences built up around the hotel, actions against the G8 summit took place all over the world.

Vienna: ClownArmy at the British Ambassy

Barcelona: Action against G8 and climate chaos
Action done in barcelona this afhernoon against climate chaos
and REPSOL YPF - a spanish based oil company responsability.

Amsterdam: Beacons of Dissent
and broadcasting of the G8 Radical Radio Collective.
Nijmegen: Attempt to put up banner 'Break the power of the G8'
Groningen: Posters 'Make Capitalism History'

Perth: IndyRadio
Sydney: Climate Criminal Carnivale
About 100 people joined a colorful and loud G8 solidarity action in Sydney, Australia July 07. The climate criminal carnivale focused on a range of corporate and government offices that are contributing to climate chaos.

In Switzerland a IMC Switzerland-Italy was set up in Lugano for translation and reporting from the G8.
Berne: Prisoner Solidarity March
Basle: G8 golfing tournament
Thun: Camp and Rubberboat Demonstration
Minks (Belarus) Action of support

A solidarity action of Russian activists

6th of Jul 2005, global action day: welcome to the british embassy in vienna!

A Rebel Clown Army action has been held in vienna in front of the great britain embassy (British Embassy, Jauresgasse 12, 1030 Vienna) 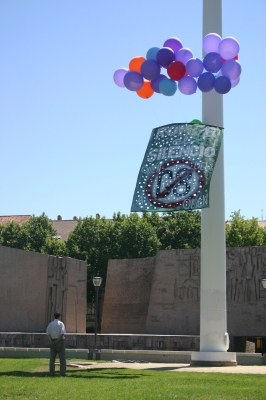 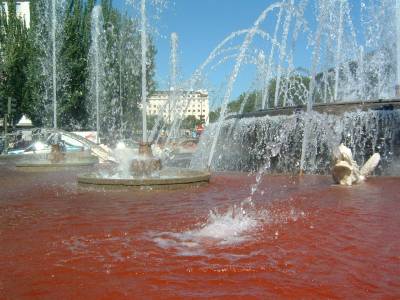 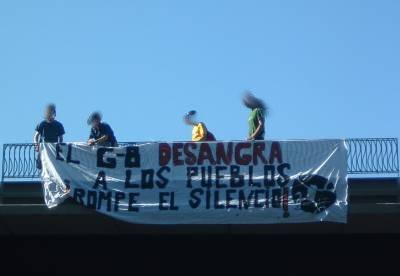 NO G8 demo in Wellington (

Around 40 people showed up for a demo today in solidarity with protesters world-wide who are protesting against the G8, Climate Change and Capitalism. Photos will come soon i'm sure...
The protest started at Midland Park where a speech by a member of the Acheh Support Group was made about Exxon Mobil.

The demo then went down Lambton Quay, unfotunately on the footpath. But the cops (lots of them around) were quite bossy about the whole affair... Lots of anarchist flags were flying in the Wellington wind. Leaflets were handed out to people explaining what the whole thing was about.

Further down on Lambton Quay the proposed Free Trade Agreement with China was auctioned off. Bidders traded workers rights, Te Tiriti o Waitangi, Democracy, Biodiversity and FUN for the FTA in return.

The demo then went up to Marian Hobbes' office. Again lots of cops. Peole put up vampire teeth on her photo. Hobbes is the minister for the environment and also the local MP. But the Labour government is so commited to progress (progress of capitalism that is) that they completely forget about the environment... (Bypass, Happy Valley, Marsden B, GE...)

there was also an action in solidarity with the anti-g8 activists in richmond, virginia that went right in front of massey headquarters. this march and direct action was organized by mountain justice summer, a campaign that is bent on stopping mountain top removal. mtr and the burning of coal, also contribute heavily to climate change and the destruction of the environment. massey is one of the bigger coal corporations that does mountain top removal. they go as far as to build a coal silo (and now have a permit to build a second one) 150 feet from an elementary school, plus a 2 billion gallon sludge dam less than 400 yards right above the school.

links to stories about the richmond action:

Christchurch New Zealand holds 'dance of dissent' against the G8

On Saturday the 9th of July activists in Christchurch, New Zealand attempted to RECLAIM THE STREET and did so for up to an hour before the cops came down on them. The party of dissenters then moved to a nearby park where the music continued into the night. A four wheel drive pinata was completely smashed to bits highlighting the effects of capitalism on the climate. FOOD NOT BOMBS served BBQ lentil burgers to the hungry crowd. There was also much information on anti capitalism, anarchism, climate change and various props and banners were used to let people know why the dissenters were there. A fire in a drum kept them warm.