The coach journey to the demo. 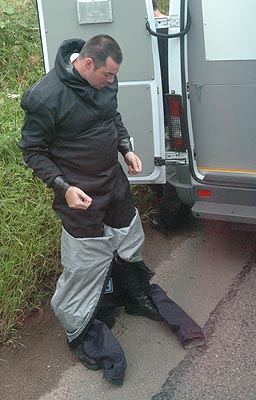 'Does my bum look big in this'? 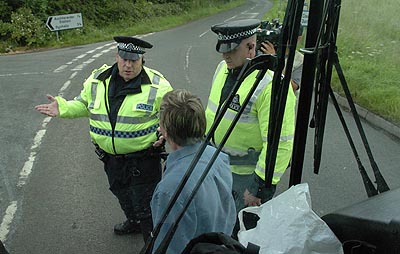 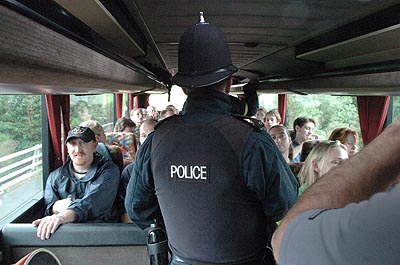 The black bloc board the train. 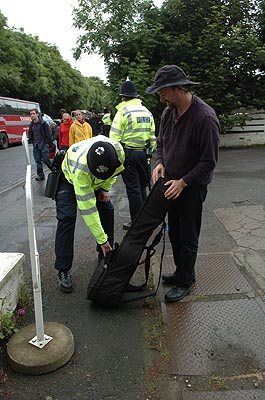 David Rovics has his guitar checked for surface to air missiles. 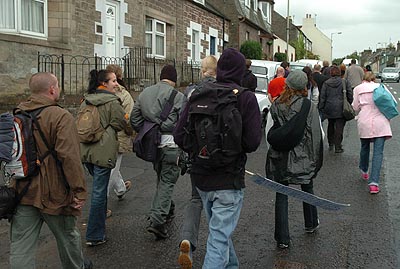 From the time we left to our arrival in Auchterada we were bombarded by a constant flow of differing reports. We were told of coaches being stopped by the Police who had cancelled the demo. Of coaches detained in Edinburgh. Our driver decided that getting us to the demo was his personal challenge so we left the main road and hit the back roads across the Perthshire countryside.

Our first encounter with the plods was copper pulling on his very homoerotic riotic riot gear. He helpfully told us that the road ahead was blocked and there was no way through. We decided not to take his word for it which was just as well as this turned out to be a complete lie.

Next we had our luggage compartment searched by a very portly cop who looked like he was about to burst out of his uniform at any second. Then we got boarded and properly searched by some Nottinghamshire Police. One Policeman argued that my photographs and the cameraman filming without his permission are a violation of his human rights???? The words 'pot', 'kettle' and 'black' spring to mind. Shortly after we were amused to find the road blocked for real by someone locked on to a car surrounded by loads of annoyed looking cops. Finally we arrive and the rest as they say is history.