About 100 people joined a colorful and loud G8 solidarity action in Sydney, Australia tonight. The climate criminal carnivale focused on a range of corporate and government offices that are contributing to climate chaos. 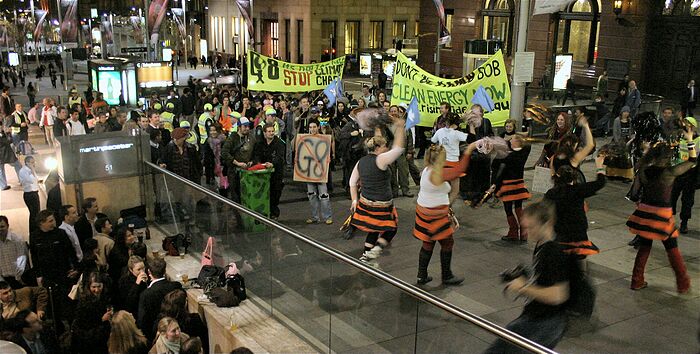 Radical cheerleaders got the message out to Friday night punters that fill Sydney's outside bars. While we all danced to the beat of the wheely bin sound system.

Australia is the worse per capita greenhouse gas polluter in the world and that doesnt include all the coal that is exported. In the land of sunshine solar is almost non-existant.

The action bailed up the offices of Tory Prime Minister John Howard as well as Labor leader Bob Carr, who was greeted with a chant of "bobs a knob".

Xtrata was one of the many corporates also targeted.

The after party is continuing near the opera house site of big mobilisation planned for August 30 against the Forbes Global CEO Conference. check out 30A Network