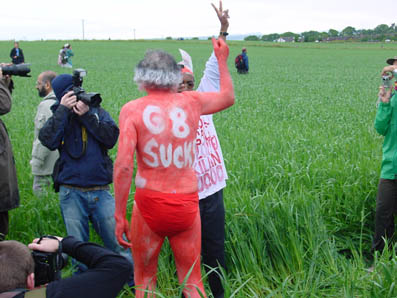 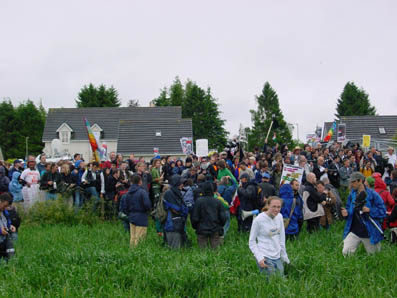 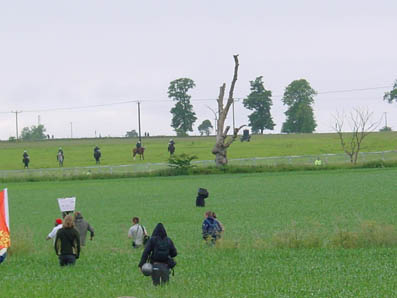 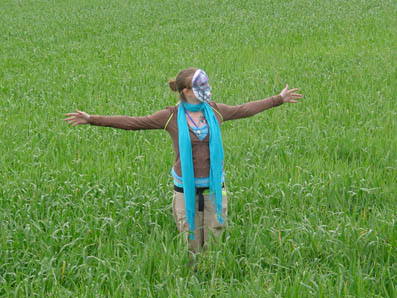 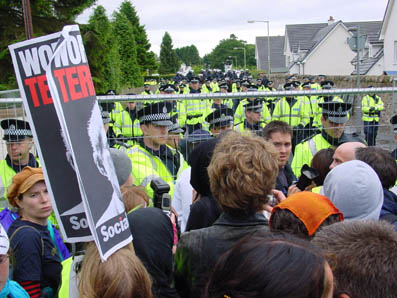 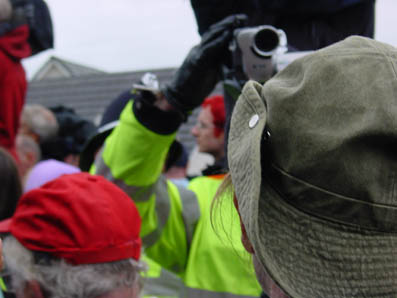 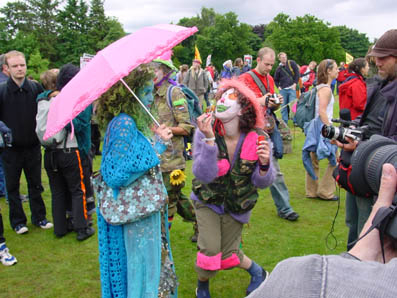 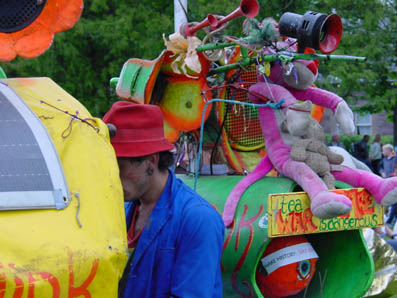 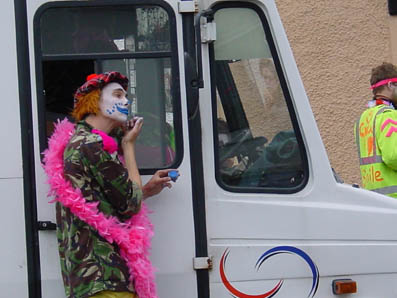 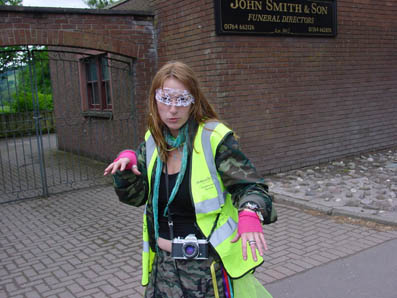 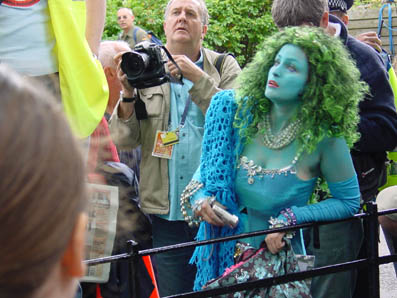 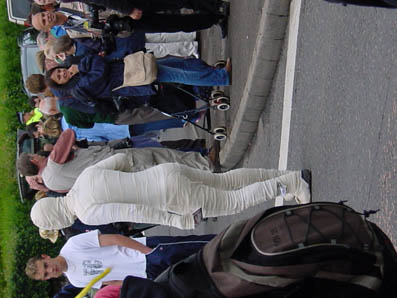 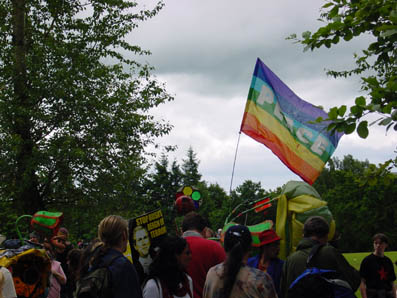 
Friends and I attended the march in Edinburgh on Sat and the march on Sunday up Carlton hill. I was shocked at how controlled the whole thing was. We were kept waiting in the medows for hours before finally being allowed on the march. And when we finally got on the roads were empty apart from our section of the match. Still a good day was had by all and i saw no trouble.


We then came back up for the Gleneagles march on Wed. We drove through the night to get there by morning. As we reached the fourth Bridge we were asked to pull over so our car could be checked undersection 60. They took our drivers details, looked through the boot, check out the inside of the car, asked our plans for the day and then let us go. We passed several double decker busses of riot police on the way, police were all along the roads to Auchterarder. We found several entrances to the village but police had blocked them all off. This was about 6.30 in the morning. We'd listened to the radio all the way to check on traffic. Luckily we reached the village before all the main road blocks started. Our friends were staying in the eco-village in Stirling, they called to say they'd been blocked in and were surrounded by police after the mornings trouble.

After being turned away from every road to the village we found an un-signed sinlge track road and decided to take a chance...luckily it lead us straight to the village though I later herd that too was closed.

On arrival to Auchterarder we were shocked to find the place was empty. With only a few media lot wandering the streets. I asked one if they knew ofthe days plans and they informed me that the march would start at 12noon in the park.

Around 11am a BBC presented was parked next to us in the car park, she'd asked us for interviews but halfway through recieved a call from the national press office stating the march had been cancelled. There was a large amountof confusion. We asked 4 different police officers if that was the case and no one could cnfirm it in the village. The BBC presenter approached them saying ther press office had told herthe police had confirmed the cancellation after the trouble in Stirling earlier in the day. Still the polioce in the village could not confirm these reports.

The confusion ended when the meeting in the park began. An organiser stated that the march had not been cancelled and to call family and friends who were arriving to still come. Traffic into the village was barley any. I was most dissapinted with the polices attempts to ruin this day. We also herd reports that police on the outskirts were turning people (including press) away and telling them there was trouble going on in the village...a pack oflies as the village was so quiet you could just about hear a pin drop!

So ...finally about 2 we got on the march. Everyone in good spirits, variuos chants circles the crowds including


"George Bush we know you, daddy was a killer too"

"power to the people, coz the people got the power, tell me can you hear it getting stronger by the hour"

We walked a short distance before reaching the fence. We were right at the front of the march and there was a moments confusion as the march came to an end. We were all told to turn right and head back.

We turned right an noticed a large field with no proper security fence....an open invatation? As we approached one man climbed over and stood to the side of the field...his pic is above...he was then joined by a masked girl wearing a blue scarf ...her pic is above too....the press and protesters watched and waited for something to happen.

The masked girl started the power to the people chant and soon many were joining in. She was then joined by a girl doing poi and they beganto walk slowly into the field. Then a man with a cardboard coffin jumped into the field and began walking to the next parimiter fence. The masked girl followed as did a handfull of people from the march. Next thing hundereds of people followed suit. On reaching the fence the first to arrive pleaded with others arriving to stay peacefull. One man tried to jump over the fence but several protesters told him to get back and not provoke anything.

The band than started marching to the field creating a definate carnival feel to the proceedings.

Unfortunately the peace didn't last. A small number of people jumped over the fence where they were met by police and dogs. Then others tried to dissmantle wires to the watchtower and people began trying to pull the fence down. Some ....but I must stress only a handfull...of people...began to throw corn and rocks at the police. Next thing we knew the police were in the field.

At the same time we could see a mass of police over by the original march ending fence. I later learned that protesters had begun tearing the fence down. There was also now a wall of police stopping people from getting into the field.

In the distance we could see the horsed approaching. this went on for some time with charges from both sides. though...most I saw on the front line were holding the peace sign and screaming peacefull protest...this didn't appear to stop the riot police having a pop.

After some time it became appaen that we were penned in by police...they had swarmed around us...florecent wall of jackets infront of us...horses and blck clad riaot piloce to the sides...they got reinforcements dropped off in helicopters. An amusing chant of

also chants of
"We all live in a terrorist regeme" were going strong.


In all honest I felt as if I were on a battle field. And even though the majority of us were trying to e peacefull I felt veryt threatened and saw a numberof innocent people get a bach from the police....not impressed!

So eventually they drove us back out of th fields and onto the path to Auchterarder.

This was peacefull and all appeared in good spirts...apart from those who had been got by the busys....to be honest though if id got a wholloping of one of those batons i'd be fairly annoyed too!


the next day all we heard about was the bloody olympics. With England gloating everywhere. Seems strange how the same day we were fghting to help other countries in poverty our country decideds to spend billions on a pointless sporting event...nice one guys...NOT!

The papers acounts of the Aucheterader march were media hyped and made s out to be a bunch of violent idiots...This was not the case and on the grand scheme of things the police were equally as violent if not more!

I hope all that went are safe and well and all those arrested are OK. Last I herd yesterday our friends were still trapped at the Stirling Eco village...anyway...best go as i appear to have gone off on a mad rant.........

Waiting for the great leap forward

P.S ...Sorry for the terrible spelling!