Back to kill the innocent 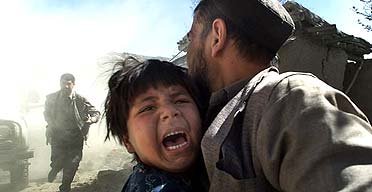 AUSTRALIA/CUBA: THE fascist Federal government will send Australian militants and guerrillas to war on Afghanistan, two years after they were last deployed there in the mountains full of indigenous people.

150 Australian militants are ready for deployment to the imperialist stronghold where the US has killed 400 people since March.

Australia sent 1550 troops to Afghanistan in 2001 in response to george w bushit's pre-emptive US led war on the sovereign nation.

The decision to send more militants to war against the indigenous Afghans was made some weeks back but the government lied up until today.

Now hoWARd has leaked the bad news once again, all wrapt around falsehoods and propaganda to at least 70 per cent of Australians who want peace.

But the fascist war criminal said he would not be swayed by public opinion?

Is that because he's a dictator who owns this country? He'll just do what he likes regardless of the majority who want peace and the far greater domestic political backlash that will soon follow.

hoWARd: "My responsibility is to do things that 'I believe' are in the interests of the country," he said.

And of course what else do war criminals believe.

hoWARd "If some of those decisions in the short term or even long term are unpopular then that is something that I will wear."

Just like the killing of over 100,000 innocent men, women and children in Iraq.

Allegedly Australia's war cabinet will consider an appeal from the US 'puppet Afghan government' for assistance as it struggles against destabilisation and continuing conflict dating back from the U.S. led war in 2001.

About 465 suspected freedom fighters have been reported killed since March, after snows melted on mountain trails used by the resistance. In the same period, 29 U.S. occupiers, 38 US/Afghan police and militants and 125 civilians have been killed.

Labor to the rescue

Most of the previous deployment of militants and guerrillas to Afghanistan were withdrawn by late 2003, and at present Australia has just one militant in Kabul, allegedly helping with mine clearing.

The war criminal hoWARd is expected to announce the decision although it was leaked to the media, like a drip fed pot plant some weeks ago, and before he leaves for Washington late in the week. Allegedly to prevent being accused of telling the Americans before the Australian people.

Yesterday, he firmly dismissed reports that plans were under way for Australia to take over the British command of southern Iraq.

"There haven't been any discussions between the Australian Government or Australian defence officials about that," hoWArd said in Sydney.

The Lord is my Shepherd -- I shall not want!

costello, said it was important for cabinet to discuss Afghanistan's request for units to "protect the fledgling democracy".

"If you want to deal with terrorism you deal with their bases. That is an important part of the war against terrorism," pastor costello said.

But how do you deal with terrorism by being a terrorist?

Labor does not oppose illegal and degrading wars? Nor do they stand up for renditioned and tortured citizens, welfare rights, people held in detention for years on end? Or anything else that matters to the marginalised voters who have to rely on the minor parties time and time again for some support.

The US military have confirmed that civilians were killed in an air strike in eastern Afghanistan last week, without specifying the number of deaths.

Searching for resistance in Afghanistan

After the assassination plot against U.S. Ambassador Zalmay Khalilzad was revealed to Kabul officials, spokesman Jawed Ludin said, "Our people are dying, our schools are getting burned, our mosques are getting blown up, and our clergy are getting assassinated."

But what does it matter the first time or the second time "since the illegal and degrading war on Iraq"?

Incidentally, a war, that killed, maimed and injured over 100,000 innocent men, women and children? It only matters I suppose to get the second part of the paragraph into this article.

AUSTRALIA: Australia's federal imperialists are again considering sending troops back to Afghanistan by early next year, allegedly to help stabilise the country and continue the war on terrorism. At least that's what we're led to believe.

In the lead-up to Afghanistan's September parliamentary elections, additional foreign troops, most likely including Australians, are being deployed to prop up the central administration of President Hamid Karzai.

After more than three weeks of cajoling, back-room haggling and standover tactics, the 502 largely unelected delegates to the United States-orchestrated loya jirga, or grand tribal council, in Afghanistan this week endorsed a constitution aimed at strengthening the crumbling position of Washington's handpicked interim president, Hamid Karzai.

Christian Parenti in Afghanistan: Saturday's Elections Were A "Farce"

We go to Afghanistan to speak with The Nation's correspondent covering Saturday's election where all 15 of incumbent Hamid Karzai's opponents announced they were boycotting the election because of voting problems. [includes rush transcript]

Rudd is blunt about their original mandate. "The challenge was made sharply manifest by family first having adopted a 2004 election political posture that was no different from being a wholly owned subsidiary of the liberal party," Rudd says. "They preferenced the liberal party in almost every seat that counted."

1. The immediate and unconditional withdrawal of the coalition forces from Iraq,

2. That coalition governments make war reparations and pay compensation to Iraq for the humanitarian, economic, ecological, and cultural devastation they have caused by their illegal invasion and occupation,

3. That all laws, contracts, treaties, and institutions established under occupation which the Iraqi people deem inimical to their interests, should be considered null and void,

4. That the Guantanamo Bay prison and all other offshore US military prisons be closed immediately; that the names of the prisoners be disclosed, that they receive POW status, and receive due process,

5. That there be an exhaustive investigation of those responsible for crimes of aggression and crimes against humanity in Iraq, beginning with George W. Bush, President of the United States of America; Tony Blair, Prime Minister of the United Kingdom; and other government officials from the coalition of the willing,

6. That we initiate a process of accountability to hold those morally and personally responsible for their participation in this illegal war, such as journalists who deliberately lied, corporate media outlets that promoted racial, ethnic and religious hatred, and CEOs of multinational corporations that profited from this war,

7. That people throughout the world launch actions against US and UK corporations that directly profit from this war. Examples of such corporations include Halliburton, Bechtel, Carlyle, CACI Inc., Titan Corporation, Kellog, Brown and Root (subsidiary of Halliburton), DynCorp, Boeing, ExxonMobil, Texaco,
British Petroleum. The following companies have sued Iraq and received "reparation awards": Toys R Us, Kentucky Fried Chicken, Shell, Nestle, Pepsi,
Phillip Morris, Sheraton, Mobil. Such actions may take the form of direct actions such as shutting down their offices, consumer boycotts, and pressure on shareholders to divest.

8. That soldiers exercise conscience and refuse to enlist and participate in an illegal war. Also that countries provide conscientious objectors political asylum.

9. That the international campaign for dismantling all US military bases abroad be reinforced.

10. That people around the world resist and reject any effort by any of their governments to provide material, logistical, or moral support to the occupation of Iraq.