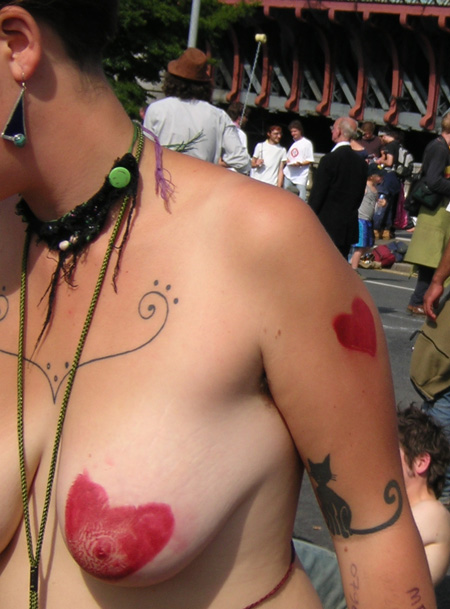 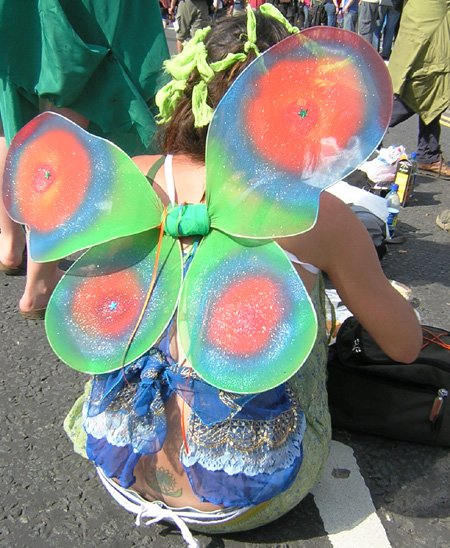 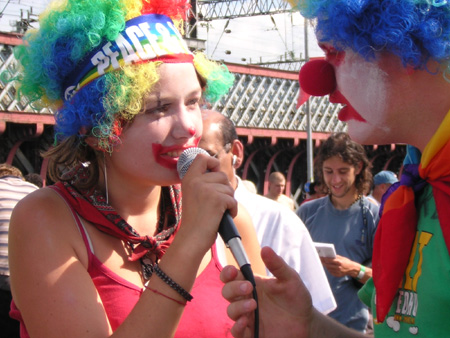 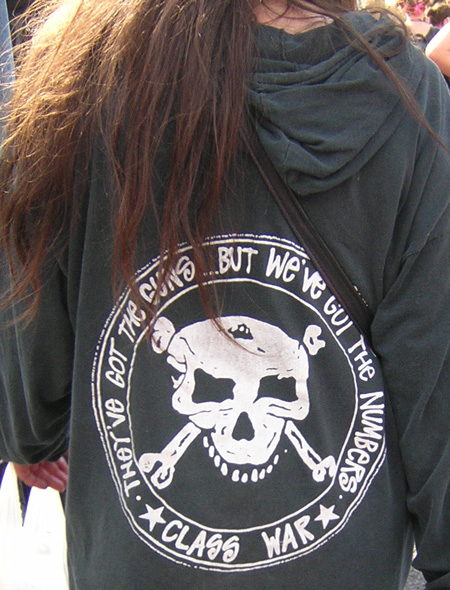 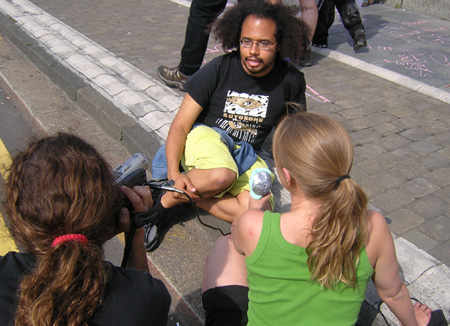 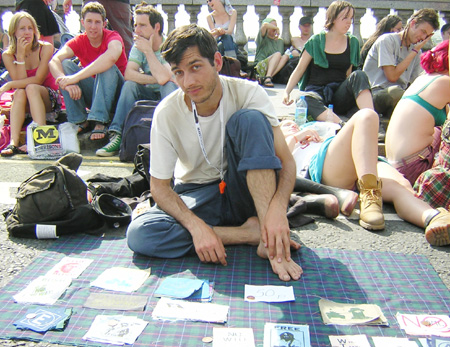 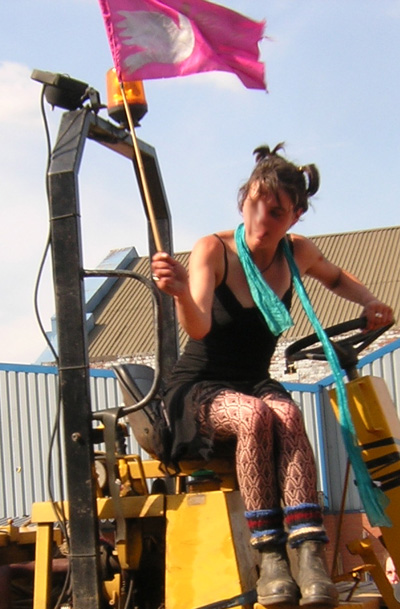 Woman on tractor during march 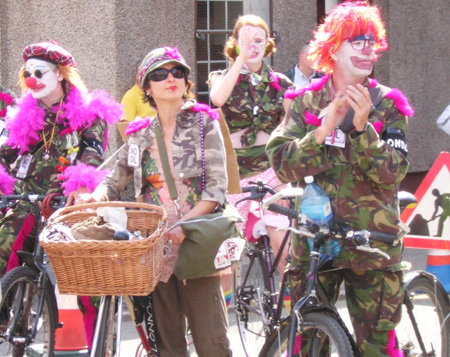 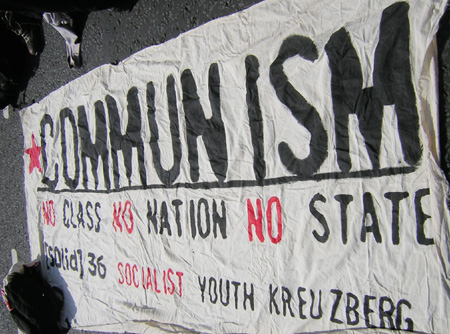 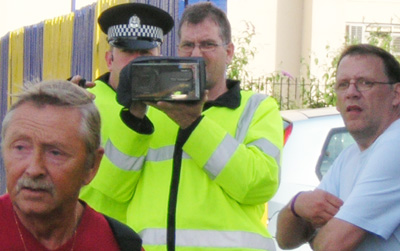 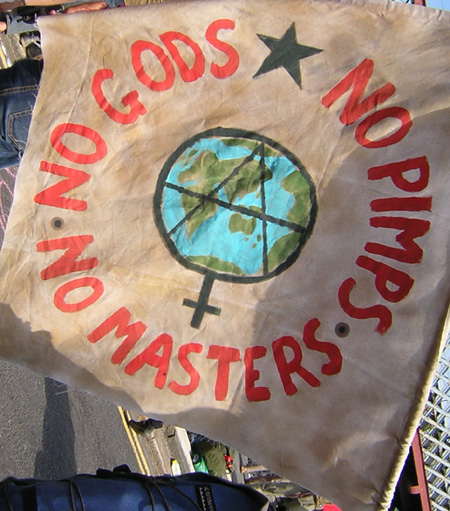 Line of Police on the Bridge 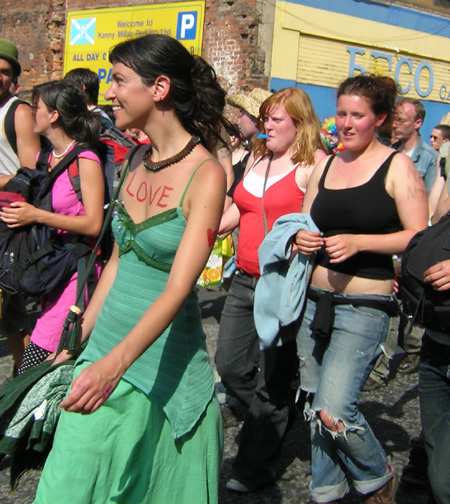 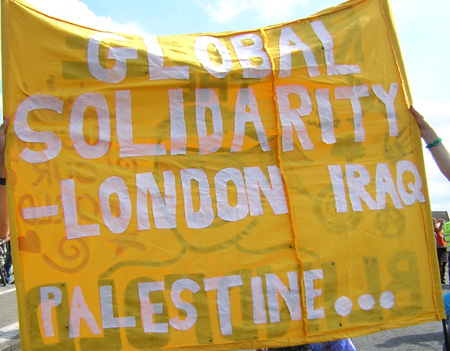 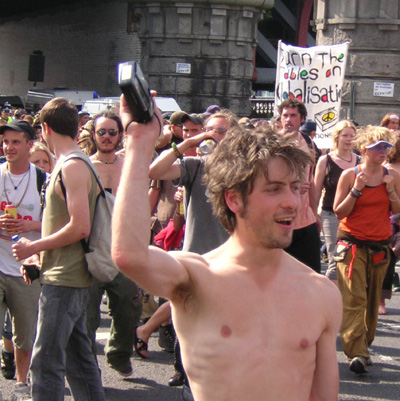 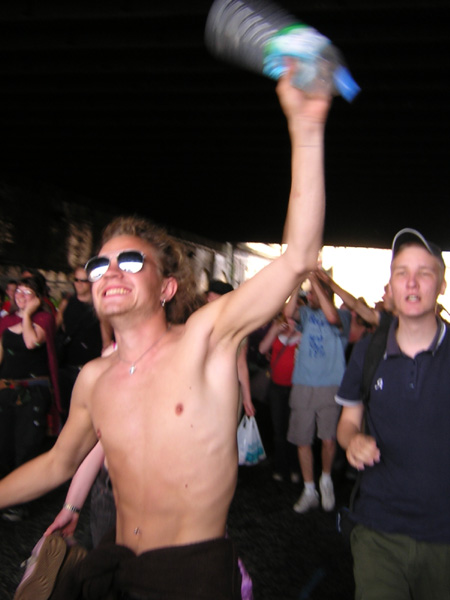 A street party was held on a bridge in Glasgow last Friday to "celebtate the end of the (G8) summit, stand up and refuse the G8, the M74 and the destruction of our planet!" People who live in the areas that would be affected by an M74 extension have said that the expansion would increase air and noise pollution, contribute to climate change, worsen traffic, expose contaminated land, and split the local community. In spite of these complaints, the government ordered the motorway to be built. This event was held in solidarity with an International Day of Action on the root causes of climate change.

My friends and I arrived late to the Boogie on the Bridge street party. We had left late in a car from Edinburgh to Glasgow, and we weren't sure exactly where to go to find the party. I guess that people had marched to this bridge (?) and set up their party. People were eating, drinking, drumming, dancing, chatting, selling anarchist magazines and fun patches... People had anti-G8 signs, since Friday was the last day of the G8 meeting in Scotland, and there were anti-climate change messages chalked on the sidewalks, drawn on people's bodies, and on signs. It was the quietest illegal street party I have ever been to- there was no large sound system. Some people did have radios and other smaller sound systems.

We decided to go to the other side of the police line that was preventing people from exiting one side of the bridge. We realized that we would have to walk through the looser police line on the other side of the bridge and go a block over, so we checked with our friends and started to leave. As internationals, we wanted to get out of there before the 2nd police line closed, since we didn't want to get arrested and/or deported from the UK! We walked around the corner and made it about 1/2 a block before the crowd came pouring off the bridge. We marched for a few miles through the southside of Glasgow. Eventually the police surrounded us, first at a "roundabout" (rotary) and then we moved about halfway down the block. We were encircled by police and held there for 1.5 or 2 hours, with no bathroom and dwindling water supplies. Eventually, people negotiated with the police and we were given an very long, very slow escort back to a community garden.