The controversial plan was yesterday raised by Queensland Premier Peter Beattie, who suggested a national ID card to prevent unlawful detention similar to that suffered by Cornelia Rau and Vivian Alvarez. 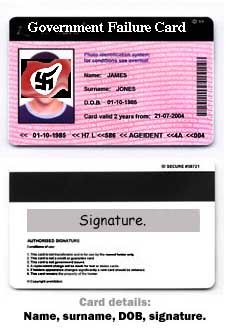 Since when did Australia own us?

The Federal Government
has dismissed renewed
calls to revisit the idea
of an Australia card.
(His ABC) 14 July 05

AUSTRALIA/CUBA: hoWARd's ABC: "The Federal Government has dismissed renewed calls to revisit the idea of an Australia card."

Phillip Ruddock: "And one way of doing it is to put this issue up on the agenda today. "The comments coincide with moves in Britain to push legislation for national identity cards through Parliament."

The Un- Australian: "A PROPOSAL for a national identity card is being examined by the Howard Government as a way of improving border security and countering the threat of terrorism."

The controversial plan was yesterday raised by Queensland Premier Peter Beattie, who suggested a national ID card to prevent unlawful detention similar to that suffered by Cornelia Rau and Vivian Alvarez.

But the 'Palmolive' inquiry has identified a culture of zealotry as underpinning current Immigration Department (DIMIA) policy and practice.

And the community insists that when government departments don't do their job then the community is not to blame and the zealots who continue to reign unchecked in Immigration and those now promoted for getting it wrong should be sacked.

Its just a jump to the right!

The Un-Australian: "But the Prime Minister revealed cabinet's National Security Committee was already examining whether tougher measures were needed to close "loopholes" in Australia's counter-terrorism effort."

"All of these things will be looked at. I don't say never, ever in relation to things like that," John Howard said in Canberra. "

But the spectre of an Australia Card - a proposal raised in 1987, which hoWARd campaigned vigorously against - came as the prime minister released a damning report into the wrongful detention of Ms Rau and Ms Alvarez, by former police commissioner mick Palmolive.

Mr beastie said problems with accurate identification of people, particularly those who were missing, had been underlined by the wrongful 10-month detention of Ms Rau.

Who owns the problem?

But why should any Australian citizen be accurately identified?

We were born here and those taken into shelter have already been granted citizenship and therefore no explanation is necessary unless the government have lost an immigrant they wish to detain indefinitely.

We are children of the Universe regardless and we have the right to be here regardless of the government or world agenda.

Since when did Australia own us? Simple message for right-wingers who think otherwise.

'Rack off losers you don't own the world' and you never will!

Government sources last night suggested an Australia card was not currently under consideration. But hoWARd apparently has left open the door of a national scheme.

"We would be complacent in the extreme if we ruled that out," he said.

Other sources say he left the door open to aid his campaign for more illegal and degrading wars and crimes against humanity to continue unabated. And when the flak comes back to haunt this country he is going to restrict the communities movements because of his failure of respect for the International Community.

Clearly if that wasn't the case then there would be no need at all to check to see if Australians found to be on Australian soil have the right to be here.

The National Security Committee is seeking advice from Government officials and the main spy agency in the wake of last week's London bombings.

But allegedly the bombings were UK home grown and if so, carried out by people who were obviously angry, frustrated and anguished about their own governments stance on going to wars illegally, killing, maiming and torturing innocent people in Iraq and Afghanistan.

But the government who got it so badly wrong is already improving cross-referencing of existing identification information, which privacy advocates believe is de facto national ID system in the making.

howard said people should not "jump immediately to the conclusion" that an ID card was the solution to any intelligence failings.

But an id card was no solution to the illegal and degrading war on Iraq and the WMD failings and never will be. If people are angry and frustrated about bad decisions made by their government including false and misleading intelligence then once again, who owns the problem?

Should our government be leading by example?

Yes! Don't lie to the Australian people about false and misleading intelligence. Don't go to war on sovereign nations states illegally. And if you do then don't torture their citizenry or for that matter our citizenry.

Perhaps, a very good reason why people don't want to know our government in the first place.

Or should I have said don't want the government to know them!

A government who illegally tortures its own citizens, detains it's own citizens, and detains refugees and asylum seekers including children in indefinite detention.

hoWARd : "I expect to have some advice on that fairly soon. And it may well be that in the course of looking at that, responding to that remit from the National Security Committee, this issue will again come on to the table."

The issue of, 'lying to the Australian people' and the issue, of 'illegal and degrading wars on sovereign nation states'? Not likely, taken into account hoWARd's not being complacent about sending more guerrillas and militants to kill more innocent indigenous Afghans.

The prime loser will also discuss transport security issues during his two-week visit to the US and Britain so we don't get blown up on the bus after his failure to recognise his illegal acts of aggression have cause some people to take drastic action.

The british government in May re-introduced a bill to parliament making identity cards compulsory and the plan is expected to have widespread support in the wake of the London bombings.

But how could it be that when governments make mistakes and are so very wrong they take out added security measures on their own citizens and propose draconian bills because they have failed!

Not only have they failed but also the International Community has failed to hold them to account over their failure, leading to draconian measure being taken out on citizens?

Australia War Association chief neil james said he believed Mr Howard was considering an identity card because it was identified as one of the chinks in Britain's counter-terror armour. "If you have a look at Europe the terrorists gravitate to Britain because all of the European Union countries have some form of national identity system," he said.

But another 'chink' to be considers is taking blair bushit and hoWARd off to The Hague for their crimes against humanity! Because the terrorist gravitate to the people who terrorise them! Any war association loser like james should understand that proposition.

As hoWARd leaves to step up his war agenda, he warned the international campaign against terrorism would continue for years. "The overall fight against terror I think will go on for a long time," he said.

Especially if you kill, maim, and torture innocent people in sovereign nation states by committing acts of aggression in illegal and degrading wars.

hoWARd also ran into a barrage of criticism after he speculated Australia could be subjected to suicide bombings, similar to those in Britain.

Defending his comments, hoWARd said he would not "run around the country giving all sorts of bland guarantees" about the terrorist threat.

Zealots Reign Unchecked in Immigration - Nothing Has Changed

The Palmer Inquiry has identified a culture of zealotry as underpinning current Immigration Department (DIMIA) policy and practice.

Three cases uncovered by the Asylum Seeker Resource Centre (ASRC) since Ms Cornelia Rau was found by her family illustrate how zealots are still driving the DIMIA machine and that other detainees are being mistreated under the same regime that oversaw the neglect of Ms Rau and the unlawful removal of Ms Alvarez. They beg the question as to why the Minister is unable or unwilling to intervene.

Some people want to remain anonymous

"This report isn't just a history lesson," said Brad Adams, executive director of HRW's Asia Division. "These atrocities were among some of the gravest in Afghanistan's history, yet today many of the perpetrators still wield power."

Back to kill the innocent

The criminal nature of these outrages is underscored by the fact that they occurred in a city that has been the scene of innumerable protests against imperialism and war. In February 2003, more than 1 million people marched in London to oppose the plans of the US and Britain to invade Iraq.

The Australian Council of Trade Unions secretary Greg Combet says the Labor Party must stand up for the rights of workers but Labor stands up for Liberal and it has been like that for years.

Searching for resistance in Afghanistan

After the assassination plot against U.S. Ambassador Zalmay Khalilzad was revealed to Kabul officials, spokesman Jawed Ludin said, "Our people are dying, our schools are getting burned, our mosques are getting blown up, and our clergy are getting assassinated."

But what does it matter the first time or the second time "since the illegal and degrading war on Iraq"? Incidentally, a war, that killed, maimed and injured over 100,000 innocent men, women and children? It only matters I suppose to get the second part of the paragraph into this article.

The Australian Council for Civil Liberties has expressed serious concerns about the plan, with president Terry O'Gorman saying public discussion is needed. Mr O'Gorman says the scheme has the potential for extraordinary reach over people's private information.