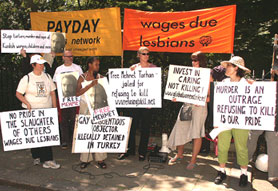 Protest in support of Mehmet Tarhan

“Pride in Refusing to Kill”

International protests in support of gay Turkish refusenik Mehmet Tarhan took place on 12 July -- the day of his military trial following his refusal to be drafted -- in London, New York and Venice.

Organized by Payday and Wages Due Lesbians, these protests demanded Mr Tarhan’s immediate release from jail, and recognition of his conscientious objector status.

Detained in Sivas military prison since 8 April, he has been attacked, robbed, humiliated and abused with the connivance of prison guards. Only after a month-long hunger strike was his safety ensured.

At his previous trial on 9 June, Mr Tarhan was released by a judge because he had "already spent two months in prison, which is about the time he would have to serve if finally sentenced". Yet, he was charged again and returned to military prison to face another trial.

Mehmet Tarhan is part of a huge movement of refuseniks and draft evaders in Turkey – over 350,000. Many are Kurds refusing to kill and repress their own people. As Mehmet Tarhan says: “The way to stop war is to deprive it of its human resource.”

As a gay man, Mehmet could have claimed a “disability” discharge because the Turkish military considers homosexuality an illness, but he has instead demanded his right to recognition as a conscientious objector. According to Wages Due Lesbians, “equality” is no better: “Having an integrated military that bombs, tortures and maims people is not a victory for diversity!”

The lively LONDON picket in front of the Turkish Embassy had placards stating: “Free Mehmet Tarhan – jailed for refusing to kill” and “Stop the murder and rape of Kurdish women, children and men.”

Protesters raised that Turkey’s military spending represents one-third of its budget, and that resources everywhere should be used for caring and not killing. “After the London bombs, bringing the troops home is more urgent than ever.”

Speakers also condemned the growing repression here – the denial of the right to protest in Parliament Square, the spread of Anti-Social Behaviour Orders, particularly targeting young people, and as one mother put it, “the growing militarization and ‘policisation’ of our schools.”

In NEW YORK, protesters spoke to a Consulate representative who rejected their claims, but was visibly shaken by them. Consulate employees and visitors, as well as hundreds of others in the United Nations district, took leaflets.

In VENICE, too hundreds took leaflets including tourists who will carry the word back to other European countries. Turkey hopes to join the European Union by presenting a sanitised record on human rights, but Mehmet Tarhan’s experience exposes both the repression inside Turkey and the massive resistance to it.

Mr Tarhan’s trial was deferred until 4 August. Meanwhile, people are invited to write directly to him as well as the Turkish authorities and MEPs calling for his urgent release. (For more information, including addresses see www.refusingtokill.net ).