A view on the London bombings

This is a 1,500 word piece on the awful events of July 7th with comparisons made to the attacks on New York and on Baghdad. 14 labelled photos are attached. 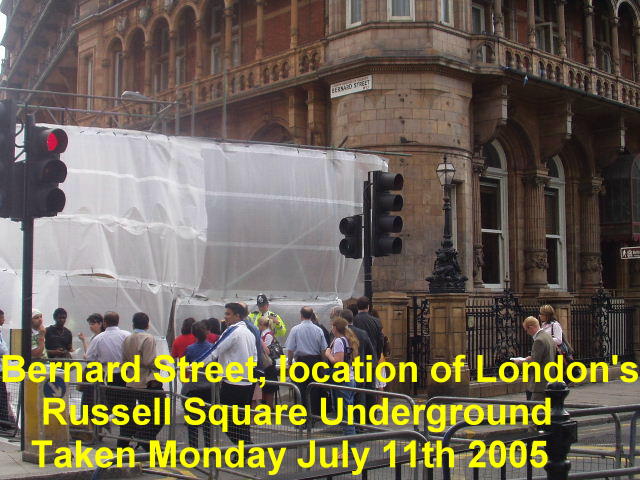 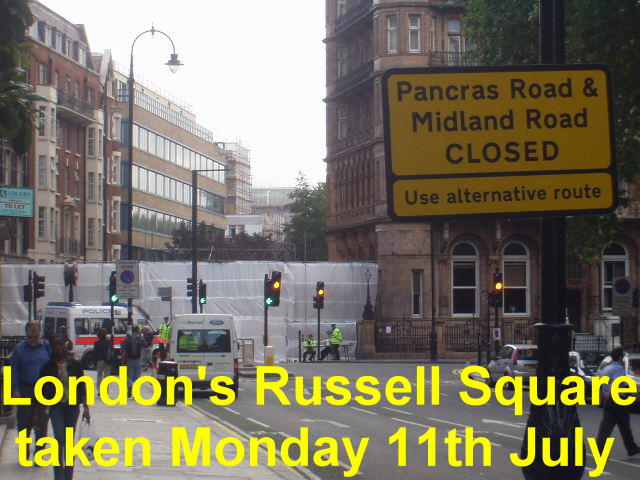 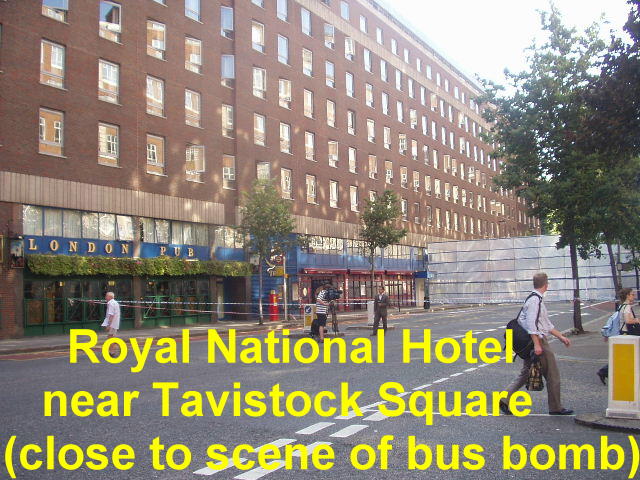 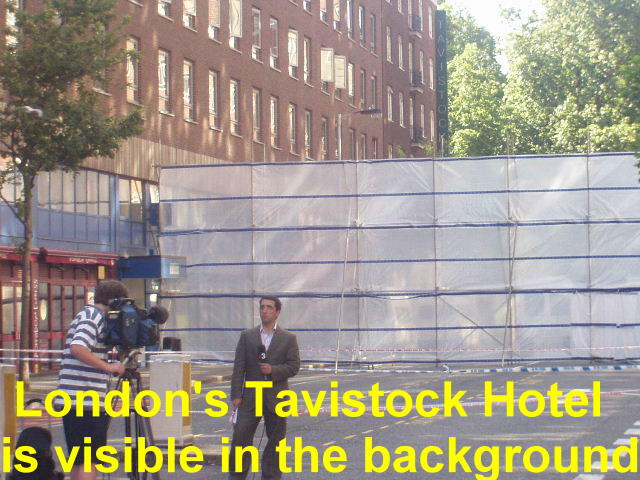 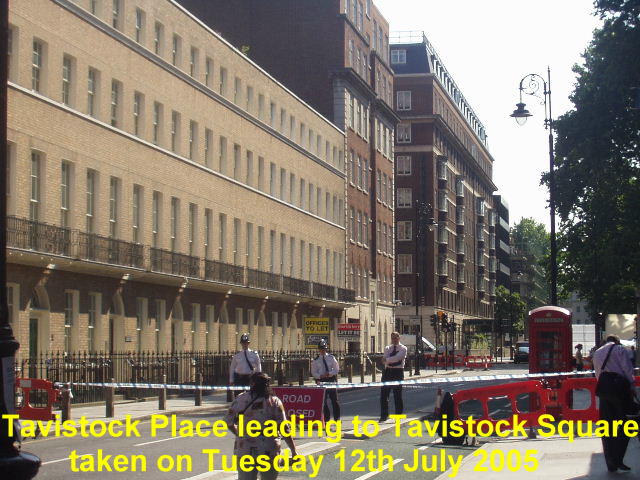 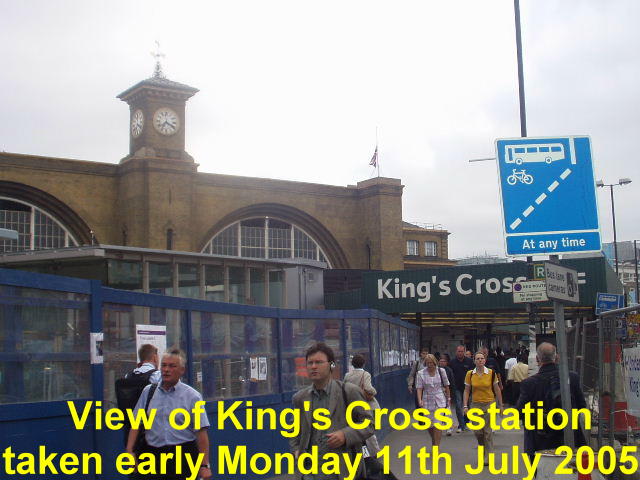 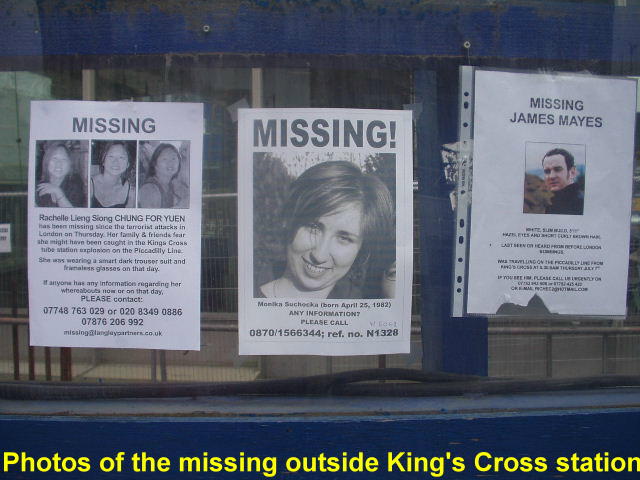 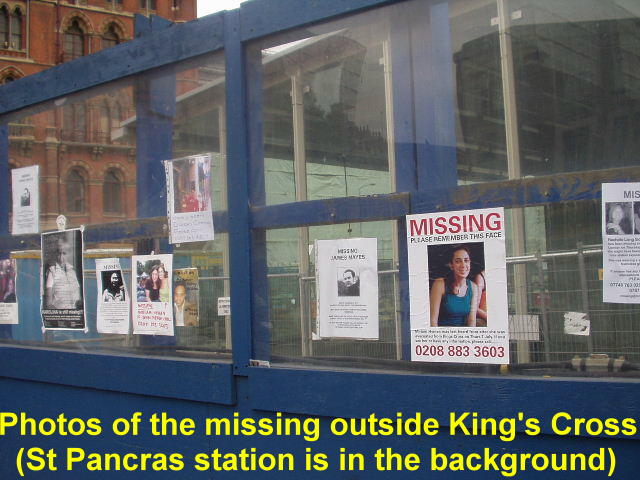 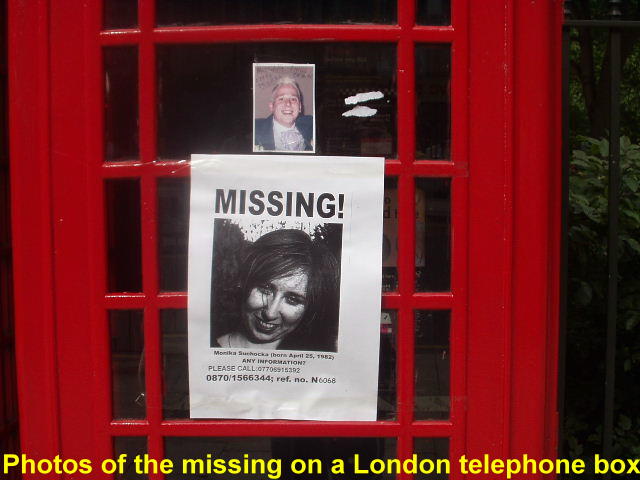 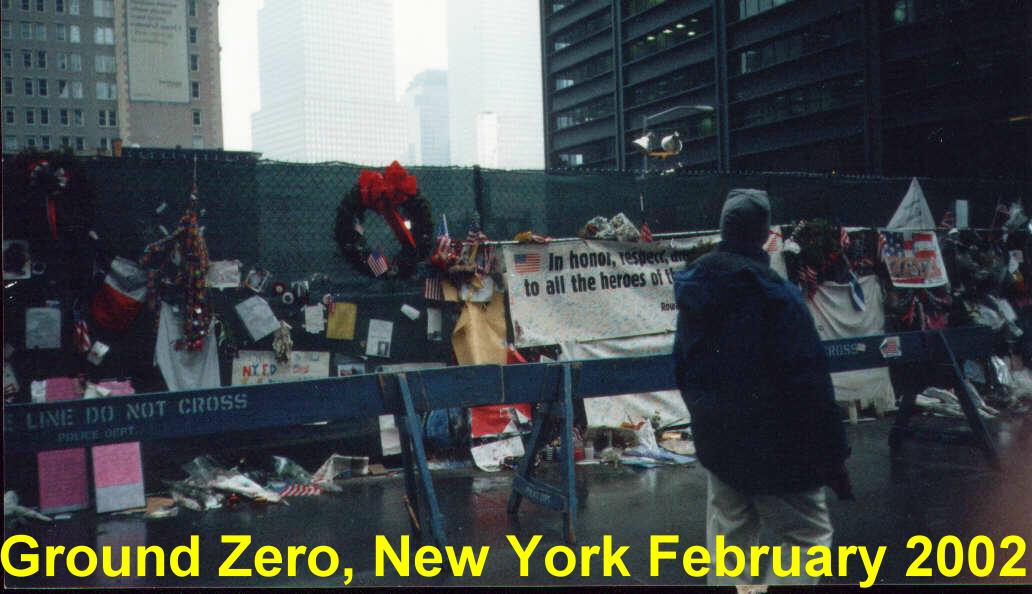 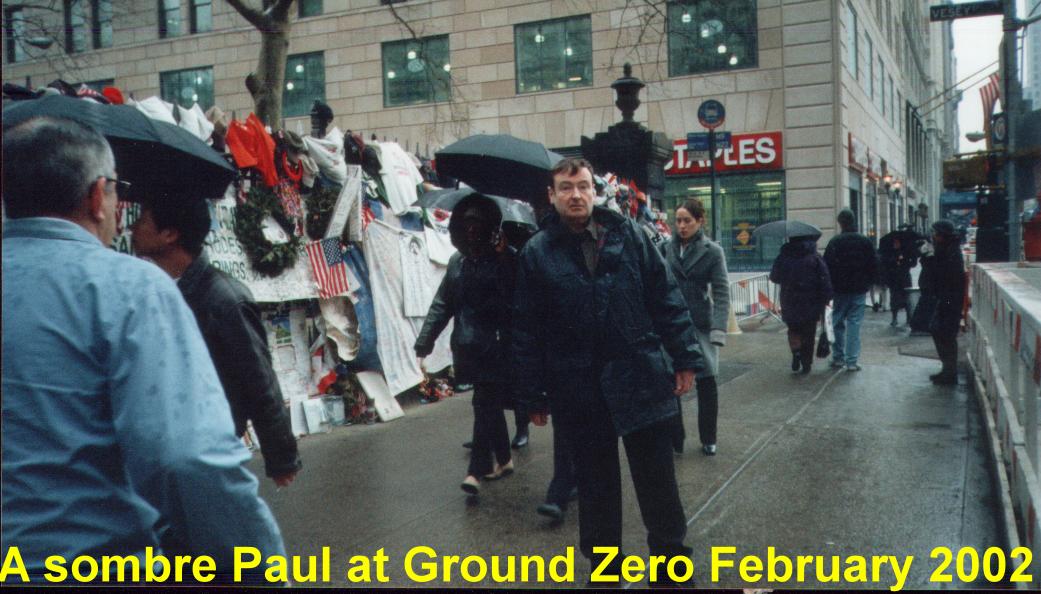 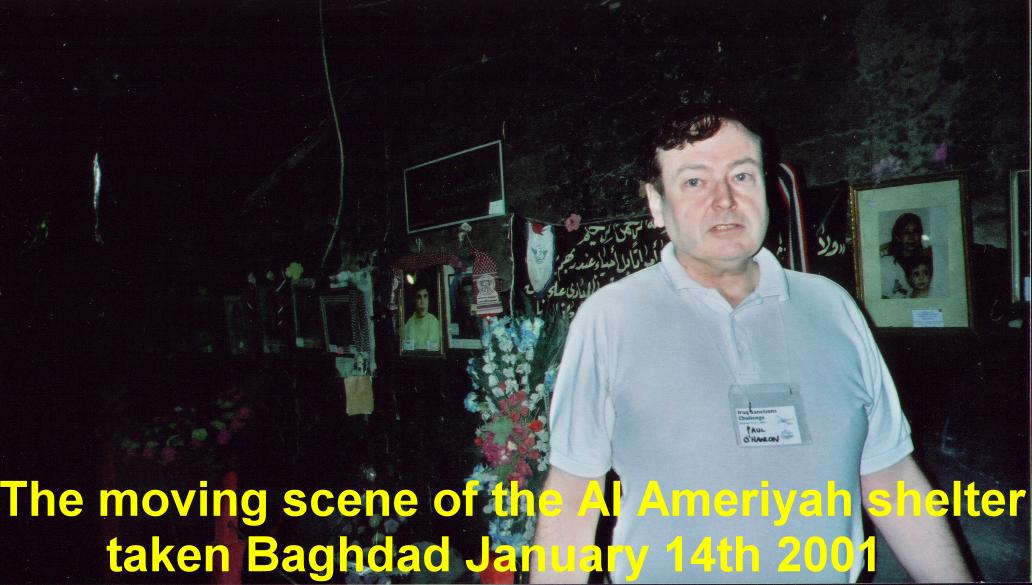 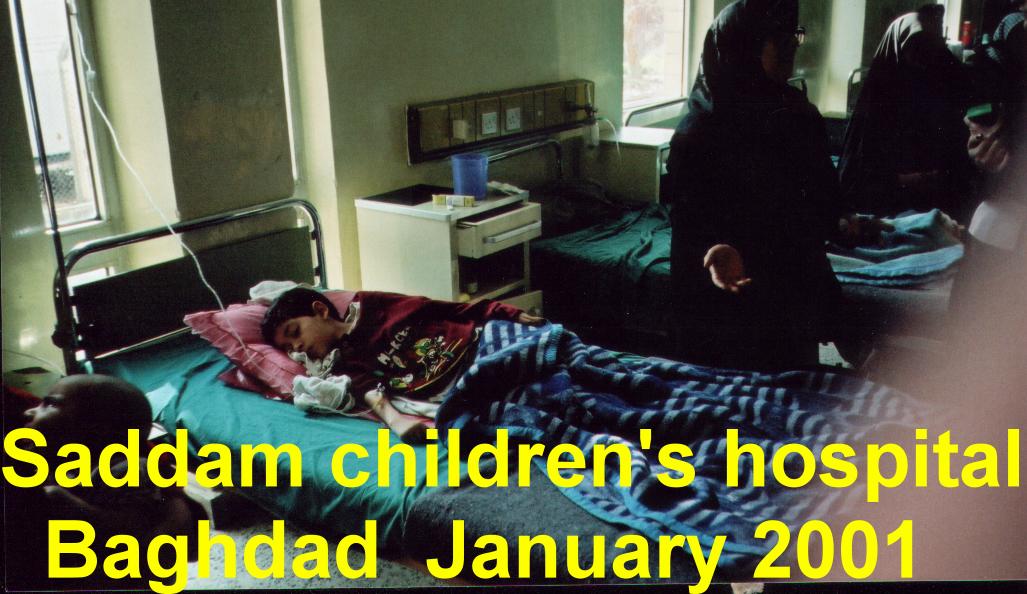 A VIEW ON THE LONDON BOMBINGS WITH PHOTOS

The terrible events of July 7th 2005 were the first suicide attack on Britain and caused widespread disruption to transport services to and from the capital. I was due to attend a conference in London starting on July 8th but the sleeper from Scotland to London was cancelled on the day of the bombings and I didn’t eventually travel until the evening of Sunday 10th July.

I arrived in London on Monday morning 11th July by the overnight train from Edinburgh, which terminates at Euston, about half a mile from King's Cross.

I walked past King's Cross railway station where 21 people were killed on Thursday, 7th July. Life seemed to go on much as normal but there were more police around than usual and a helicopter flew overhead. I felt a mixture of sadness and anger; sadness at the fifty or so wasted lives and anger that the policies of Blair and Bush in attacking Iraq had brought this on. On walking past King's Cross station you see photos of those who are still missing. It's very poignant and reminded me of my visits to Ground Zero and the Ameriyah air raid shelter in Baghdad. It is always the innocent who suffer. Terrorists simply cannot get anywhere near the likes of Bush, Blair, Berlusconi or Bin Laden.

The Blair government and the media tells us that we can take it and that we are `defiant` - that's so easy for `them` to say when they don't have to `take it`.

I felt privileged to be able to walk around London in what felt like comparative safety and was able to stay in a comfortable hotel, ironically the Tavistock Hotel in Tavistock Square where the number 30 London bus was blown up.

As I write this the death toll has reached 55 and the news headline is of a bomb near Baghdad which has killed some 58 people though of course their deaths will receive much less coverage and analysis than the London victims.

We should spare a thought for all those who were bereaved by both the London and Iraq attacks and remember the continuing ordeal of the Iraqi people who are roasting in the boiling heat of the summer with little water or electricity in an illegal and brutal occupation. Their ordeal has lasted for well over a decade; read this description of the incineration of over 300 innocents in the Ameriyah shelter in Baghdad in 1991:

Remembering the bombing of the Ameriyah civilian shelter in Iraq

February 12, 1991: F117As streak across the Iraqi skies at 5:20 a.m. Laser-guided bombs* lock on. Fire one. Fire two. Bomb one hits the Ameriyah shelter, smashing through ten feet of concrete and steel. Precisely, it explodes milliseconds after penetrating the shelter. The shelter is wide open with 325 women and children and elderly people screaming. Seconds pass in front of people’s eyes when bomb two arrives on time. White light, white heat. Bomb two is an incendiary bomb, designed to cremate the target. 317 bodies burn for seven hours, as the workers attempt to open the doors that are welded shut. Out of desperation, the doors are blown open with dynamite. There are 7 survivors.

Was this not an act of `terrorism`? The 13-year sanctions regime, which was likened to a medieval siege claimed over a million, lives and led to the resignation of UN food coordinators Denis Halliday and his successor Hans Von Sponeck who left their jobs in disgust at what they saw as a policy of genocide. They both conducted campaigns against the sanctions and went on gruelling speaking tours around the world but the mainstream media almost totally ignored them. Surely the vicious sanctions regime was a `weapon of mass destruction`?

One of the panellists, Colleen Graffy, an American right wing Republican lawyer, used the term `brainwashing` when referring to the way British Muslims were made to support the September 11th attacks. She quoted a survey saying that 13% of British Muslims supported the attacks through `Brainwashing` but remember 87% of British Muslims opposed the attacks. Compare this with the brainwashing of the British and American people by the government and media in the run up to war. We were incessantly told of Iraq’s Weapons of Mass destruction, which didn’t exist.

All the newspapers, magazines, TV and radio stations used the phrase `weapons of mass destruction` over and over and over again – is this not `brainwashing`? Even supposedly impartial BBC news bulletins would say things like “Hans Blix and his UNMOVIC team are searching for Iraq’s weapons of mass destruction.” They should really have qualified the phrase WMD with `supposed` or `suspected` - the way it was put implied that yes, the weapons actually exist - it’s just that they haven’t been found yet. With all the coverage of Iraq there was virtually no mention of the terrible effects of the sanctions, which according to UNICEF killed over a million people and also no coverage of the issue of Depleted Uranium.

I was in the USA in 2002 during the run up to the war. The American media coverage was little more than a joke – it was brainwashing if ever there was. The TV news programmes on NBC and Fox had a small stars and stripes in the bottom left hand corner of the screen. The CNN channel had a bar about three quarters of the way down the screen with a couple of stars and a stripe flickering – they were trying, subliminally, to appeal to people’s patriotism.
The format of the programmes was typically having a military man on one side with a retired military man on the other. The presenter would say things like “How can we get people on our side?” and addressing the audience he would say,
“You’re not sure we should invade Iraq? Maybe you will be after you hear the palaver coming out of Baghdad.” It was blatant cheerleading for the coming war with no attempt at objectivity.

The British tabloids were of course rabidly pro war with Murdoch’s `Sun` (or `Scum` to its detractors) leading the way with headlines like `He’s got ‘em, now let’s get him`. The British media as a whole largely supported the war with only the `Daily Mirror` and small circulation `Independent` offering mild opposition.
Brainwashing is not exclusive to British Muslims.

Here is what right wing nutter Frank Gaffney had to say about the London bombings – he blames it on `Islamofascism`, which is a new phrase to me.

War Footing
By Frank J. Gaffney, Jr.
National Review Online, 7 July 2005
The wave of bomb attacks that shattered the morning rush hour in London today should also destroy the complacency with which many Americans had come to view the war being waged against us by terror-wielding foes. The death and destruction in the subway system known as the "Tube" below ground and on a bus above is a vivid reminder of a central reality of our time: While we have been spared such horrors here for nearly four years, anyone who thinks we can safely divert our attention from this threat is kidding himself, and putting the rest of us at grave risk.
At this writing, not much is known about the extent - let alone the detailed nature or specific perpetrators - of the bloodletting in London. What is clear, however, is that the attackers exhibited the sort of calculation and ruthlessness that has come to be associated with the ideology at the heart of the war on terror: ISLAMOFASCISM. Synchronized attacks on public infrastructure and spaces with a view to murdering as many civilians as possible and timed to interrupt or otherwise influence national or international events is a hallmark of those we have been fighting since 9/11 in Afghanistan, Iraq, and elsewhere around the globe.

Frank J. Gaffney Jr. is the president of the the right-wing advocacy organization, Center for Security Policy and a columnist for The Washington Times. Frank Gaffney is a former Reagan administration Assistant Secretary of Defense. He is ideologically close to Israeli hardliners such as the Likud party.


My final thoughts
The tragic loss of life in London, New York, Baghdad and elsewhere is very distressing. What is the answer? I agree with Noam Chomsky, George Galloway and others who argue we must `drain the swamp` of hatred and injustice which breeds terrorism. There must be a proper settlement to the Israeli/Palestinian problem and an end to the occupation of Iraq. The bloody prescriptions of the neo-cons and their apologists can only lead to more violence

14 labelled photos are attached including 9 from London, two from Ground Zero in New York and three from Baghdad.