"So I call upon other parties like the Iraqi army and the Iraqi police to exercise self-restraint with Iraqi people and not be provoked [by] them or the occupying forces as this isn't in the interest of Iraq," he said. 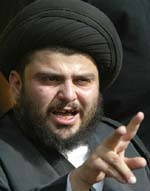 Iraqis should not be provoked by the coalition "occupation"

Moqtada Sadr
says he will not
take part in
Iraq's political
process while
the US remains.

Iraqis should not be provoked by the coalition "occupation", Sadr said and he added: "Resistance is legitimate at all levels be it religious, intellectual and so on.

"The first person who would acknowledge this is the so-called American President [George W] Bush who said: 'If my country is occupied, I will fight'."

Sadr, said that the United States "does not want confrontation".

"So I call upon other parties like the Iraqi army and the Iraqi police to exercise self-restraint with Iraqi people and not be provoked [by] them or the occupying forces as this isn't in the interest of Iraq," he said.

"I also call on the Iraqi people to exercise restraint and not get enmeshed in the plans of the West or plans of the occupation that wants to provoke them."

The presence of foreign troops was the reason for the current problems faced by Iraq, he argued.

"The occupation in itself is a problem. Iraq not being independent is the problem. And the other problems stem from that - from sectarianism to civil war. The entire American presence causes this."

The cleric said he would not play any part in the political process while the US remains.

"I personally shall not interfere. I say that our constitution is the Koran and the Sunnah (book of Islamic law) and I refuse any political role while the occupation is present."

Britain is likely to begin scaling back its militia in Iraq within the next 12 months, Occupation Secretary john reid has confirmed in an interview.

"I believe it is a process that could start - no more than that - over the next 12 months," he said

reid insisted Britain did not have "long-term imperialist ambitions" in Iraq and said US-led forces, which include around 8,500 British troops, would only stay as long as needed.

'This is the culminating session of the World Tribunal on Iraq. It is of particular significance that it is being held here in Turkey where the United States used Turkish air bases to launch numerous bombing missions to degrade Iraqs defenses before the March 2003 invasion...'

The Most Cowardly War in History

9. Willfully devastating the environment, contaminating it by depleted uranium (DU) weapons, combined with the plumes from burning oil wells, as well as huge oil spills, and destroying agricultural lands. Deliberately disrupting the water and waste removal systems, in a manner verging on biological-chemical warfare. Failing to prevent the looting and dispersal of radioactive material from nuclear sites. Extensive documentation is available on air, water pollution, land degradation, and radiological pollution.

10. Actively creating conditions under which the status of Iraqi women has seriously been degraded contrary, to the repeated claims of the leaders of the coalition forces. Women's freedom of movement has been severely limited, restricting their access to education, livelihood, and social engagement.Testimony was provided that sexual violence and sex trafficking have increased since the occupation of Iraq began.

11. Failing to protect humanity's rich archaeological and cultural heritage in Iraq, by allowing the looting of museums and established historical sites and positioning military bases in culturally and archeologically sensitive locations. This took place despite prior warnings from UNESCO and Iraqi museum officials.

12. Obstructing the right to information, including the censoring of Iraqi media, such as newspapers (e.g., al-Hawza, al-Mashriq, and al-Mustaqila) and radio stations (Baghdad Radio), targeting international journalists, imprisoning and killing academics, intellectuals and scientists.

13. Redefining torture in violation of international law, to allow use of torture and illegal detentions, including holding more than 500 people at Guanta¡namo Bay without charging them or allowing them any access to legal protection, and using "extraordinary renditions" to send people to torture in other countries known to commit human rights abuses and torture prisoners. B. Against the Security Council of United Nations

1. Failing to protect Iraq against a crime of aggression.

2. Imposing harsh economic sanctions on Iraq, despite knowledge that sanctions were directly contributing to the massive loss of civilian lives and harming innocent civilians.

3. Allowing the United States and United Kingdom to carry out illegal bombings in the no-fly zones, using false pretense of enforcing UN resolutions, and at no point allowing discussion in the Security Council of this violation, and thereby being complicit and responsible for loss of civilian life and destruction of Iraqi infrastructure.

4. Allowing the United States to dominate the United Nations and hold itself above any accountability by other member nations.

5. Failure to stop war crimes and crimes against humanity by the United States and its coalition partners in Iraq.

6. Failure to hold the United States and its coalition partners accountable for violations of international law during the occupation, and giving official recognition to the occupation, thereby legitimizing an illegal invasion and becoming a collaborator in an illegal occupation.

C. Against the Governments of the Coalition of the Willing Collaborating in the invasion and occupation of Iraq.

D. Against the Governments of Other Countries Allowing the use of military bases and air space, and providing other logistical support, for the invasion and occupation.

E. Against Private Corporations Profiting from the war with complicity in the crimes described above, of invasion and occupation.

F. Against the Major Corporate Media

1. Disseminating the deliberate falsehoods spread by the governments of the US and the UK and failing to adequately investigate this misinformation. This even in the face of abundant evidence to the contrary. Among the corporate media houses that bear special responsibility for promoting the lies about Iraq's weapons of mass destruction, we name the New York Times, in particular their reporter Judith Miller, whose main source was on the payroll of the CIA. We also name Fox News, CNN and the BBC.

2. Failing to report the atrocities being committed against Iraqi people by theoccupying forces.

Recognising the right of the Iraqi people to resist the illegal occupation of their country and to develop independent institutions, and affirming that the right to resist the occupation is the right to wage a struggle for self-determination, freedom, and independence as derived from the Charter of the United Nations, we the Jury of Conscience declare our solidarity with the people of Iraq.

1. The immediate and unconditional withdrawal of the coalition forces from Iraq,

2. That coalition governments make war reparations and pay compensation to Iraq for the humanitarian, economic, ecological, and cultural devastation they have caused by their illegal invasion and occupation,

3. That all laws, contracts, treaties, and institutions established under occupation which the Iraqi people deem inimical to their interests, should be considered null and void,

4. That the Guantanamo Bay prison and all other offshore US military prisons be closed immediately; that the names of the prisoners be disclosed, that they receive POW status, and receive due process,

5. That there be an exhaustive investigation of those responsible for crimes of aggression and crimes against humanity in Iraq, beginning with George W. Bush, President of the United States of America; Tony Blair, Prime Minister of the United Kingdom; and other government officials from the coalition of the willing,

6. That we initiate a process of accountability to hold those morally and personally responsible for their participation in this illegal war, such as journalists who deliberately lied, corporate media outlets that promoted racial, ethnic and religious hatred, and CEOs of multinational corporations that profited from this war,

7. That people throughout the world launch actions against US and UK corporations that directly profit from this war. Examples of such corporations include Halliburton, Bechtel, Carlyle, CACI Inc., Titan Corporation, Kellog, Brown and Root (subsidiary of Halliburton), DynCorp, Boeing, ExxonMobil, Texaco, British Petroleum. The following companies have sued Iraq and received "reparation awards": Toys R Us, Kentucky Fried Chicken, Shell, Nestle, Pepsi, Phillip Morris, Sheraton, Mobil. Such actions may take the form of direct actions such as shutting down their offices, consumer boycotts, and pressure on shareholders to divest.

8. That soldiers exercise conscience and refuse to enlist and participate in an illegal war. Also that countries provide conscientious objectors political asylum.

9. That the international campaign for dismantling all US military bases abroad be reinforced.

10. That people around the world resist and reject any effort by any of their governments to provide material, logistical, or moral support to the occupation of Iraq.

Howard Vs Regina in Canberra the Capital Territory of Australia- Friday
January 30 2004.

Would the defendant please stand while I read out the judgment of this court?

Defendant stands. State your name and where you reside.

Defendant: John Winston Howard of Parliament House Canberra in the Capital Territory of Australia your honor.

820 signatures from people who have evidence in support and who have signed the petition.